What Death Taught Terrence: An Uplifting Read In Uncertain Times 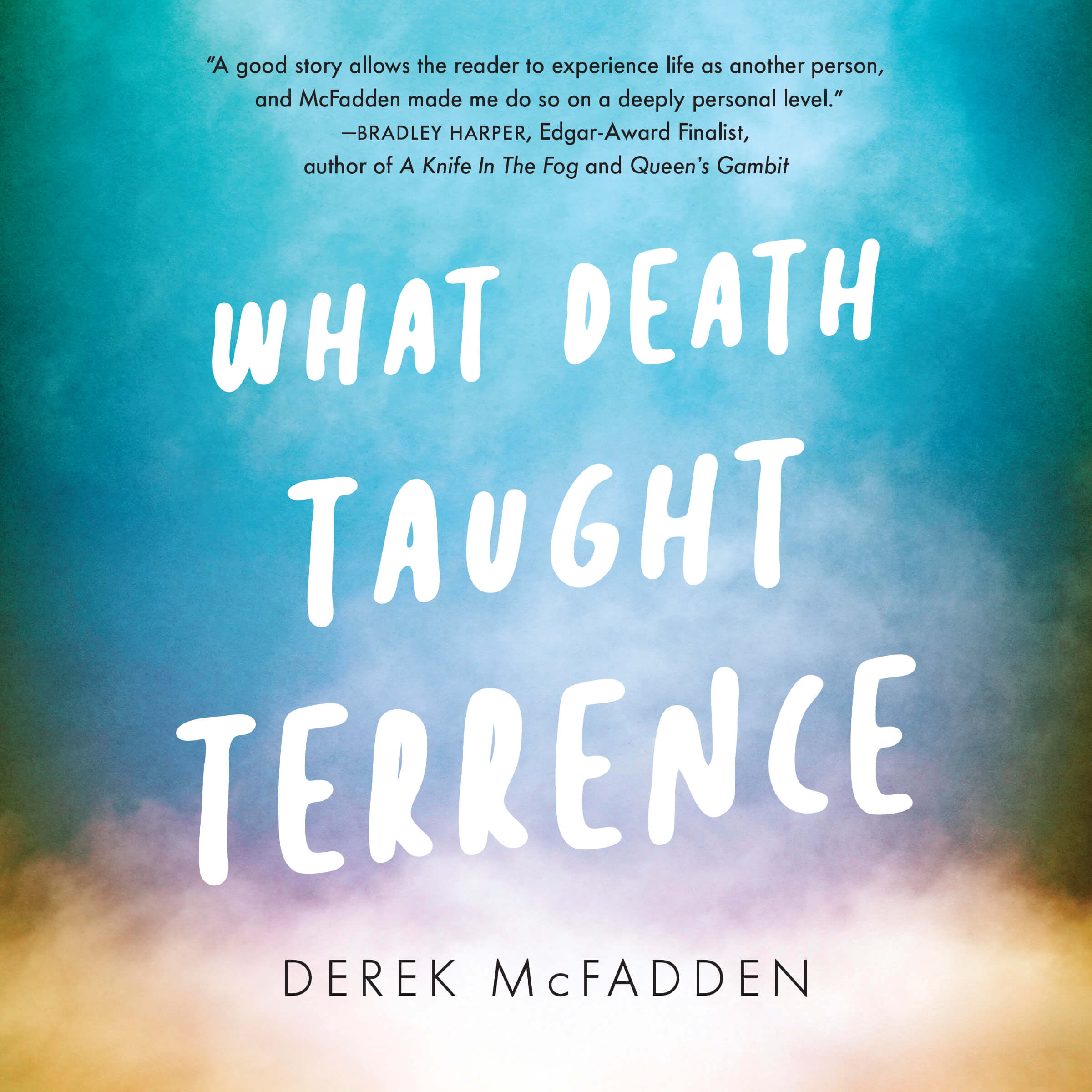 My name is Derek McFadden, and I’d like to thank Authors’ Lounge for the opportunity to share the story of how my novel, What Death Taught Terrence, came to be.

Since I was first cognizant of the fact that writing was a thing people did–meaning books didn’t just appear, fully formed, out of thin air, their covers either painted or photographed, then applied and affixed, their bindings strong enough to stand up to years of readers’ abuse–I’ve known: I want to do that, too. I want to make words move people. At six years old, I told my father, a writer in his own right, that I’d be a writer someday. Though my inclination toward words has never had much to do with my dad’s aptitude. I needed to tell stories. It’s a compulsion. Stronger on some days than others, it is, nevertheless, always with me.

The thing about wanting to do things when you have cerebral palsy like I do: it isn’t that  goals remain forever unrealistic and unattainable. In truth, most things are always just barely out of my grasp.

You don’t know how. And you might burn the house down if you try, my unhelpful thoughts would say to me.

You’re not like your friends. You’re slow-moving and fragile,  and you’ll never play sports.

So many people say they want to write a novel, and then they never quite make it happen. What makes you think you can write a novel?

Because, I argued back, writing is something I’m good at.

Of all the times I wished I could do something, only to have my doubting mind come up with reasons why I couldn’t or wouldn’t achieve a goal, writing was one of the few activities about which I managed to mount a response to the doubt that ruled me.

As a child, I was good–better than any of my friends–at one thing. I could write. Not by hand, mind you. My palsy wouldn’t allow this. But I could tell stories, and I basked in teachers’ glowing praise of my words.   This praise gave me a weapon of sorts with which to fight back against other kids’ bullying.

You may not like how I look, I thought, or how I walk, or how long it takes me to do a math problem. In fact, you may laugh at me when I limp and veer my way down the not-wide-enough school hallways. (My parents would tell me how lucky I was to be able to walk at all, but when other kids used me as fodder for their own amusement, I didn’t feel lucky.)

A bookworm. That’s what I was. When the other kids were outside reveling in recess, I knew the school librarian well. She’d let me sit at one of the empty tables and lose myself in books. Enjoyable as this was, I heard other kids–other readers not unlike me­–say they read books to “escape into them”. As a kid with a case of cerebral palsy, whose eyes’ lack of acuity meant I’d always be referred to as “visually impaired”, I never found a character in any book who looked, talked, or sounded anything like me.

“So change that,” my dad told me once, when I came home from school and complained to him.

“Change it? Change it how?”

“Write the book you want to read,” he advised, as though his point was as obvious as multiplication.

I thought on this advice for years. And, for years, I didn’t think I’d lived enough life to fully honor the story I wanted to tell. My story. My truth. Fictionalized so as to read more universally and, thus, it might, I hoped, be applicable to a wider swath of the reading public.

This story isn’t just for people who wonder what it’s like to live in a body others see as different or other, I thought, as the composition of What Death Taught Terrence began. It’s also for anyone who wishes to be uplifted. Momentarily lifted from the virtual muck that is our world.

Anyone can read bad news anywhere these days. Anyone can get mired in the muck, if you will. It takes two seconds to scroll and find a news story that will depress you or make you doubt the goodness of the human race. What Death Taught Terrence is meant as something of an antidote to this bad-news-is-normalcy mentality.

The first draft of Terrence was written, I’ll admit, as therapy for its author. (I wonder if this is true of other authors and other books, too.) Succeeding drafts, though–and attempts to turn joy and pain and heartache and love from mere feelings into full-fledged emotions­–revealed deeper meanings within the book than were probably evenintended initially.

With Terrence’s publication back in February of 2020, I thought I’d finally achieved what I wanted; I’d published a book. Goal met. Yet something was missing.

Let’s have a conversation, dear reader. Just the two of us. You and me. What do you say?

You can purchase the book at the links below. (Paperback, hardcover, kindle, and audio editions available!) And please come visit me on Facebook!