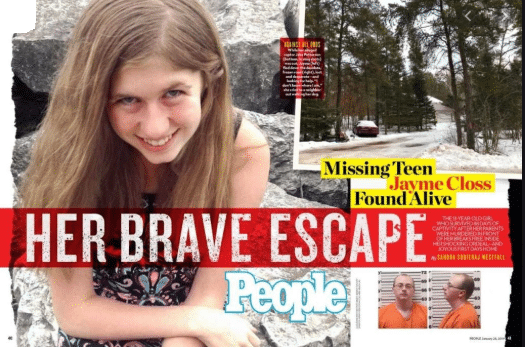 It was exactly one year ago that I was invited to the rural resort town of Barron, Wisconsin as a grief expert to assist that community in dealing with a terrible event in their midst.

Some readers will recall this national news story of murder and abduction.  Denise and James Closs were found brutally murdered in their home in Barron, Wisconsin.  Their 13 year old daughter, Jayme was abducted and nothing was known of her whereabouts for several months.  The community was reeling from this disturbance of their peaceful life and was bringing in experts from the helping professions who could help them deal with their grief and loss issues.  I was there to help the local leaders learn more about good grieving and how to help others in their grief.

Just a few days before I arrived, the daughter, Jayme had managed to escape and was in protective custody as her 25 year old male captor was apprehended.  Not much was known at that time about what Jayme had endured and this has been pretty closely guarded up until today.

The murder of Jayme’s parents was difficult enough for the community of Barron to accept.  These were parents that most folks knew through school and church and the fear was palpable in that town as parents realized that this could happen in their own nice community to their own beloved children.  But the abduction of Jayme was even more difficult to deal with, because everything was so unresolved.  Nobody knew if she was dead or alive and if alive, what was being done to her.

This type of loss is called “ambiguous loss” by psychologists.  It is grief that is experienced from the loss of a loved one who might still be alive or might not, such as an abduction.  It is the kind of loss that parents feel for a son who is in the military and is Missing In Action.  It is also the kind of loss that we feel when someone is still alive, but they are no longer who we knew them as being.  For example, I have worked with numerous families who have a loved one with some form of dementia like Altzheimer’s Disease.

I recall the difficult time that the daughters of an elderly mother had when she finally died of Altzheimer’s Disease.  They were both feeling guilty, because they weren’t more emotionally upset at their mother’s death.  I had to remind them that they had done their grieving a long time ago when they lost the mother that they knew.  For the past 4 years she could not carry on a conversation and didn’t even remember who they were and that they were her daughters.  She was mom and yet not mom at that point.

A similar kind of ambiguous loss is oftentimes felt after a divorce.  The partner is still alive, but they are dead to you in terms of relationship.

The residents of Barron, Wisconsin were dealing not only with grief over the murdered parents, but ambiguous loss over Jayme’s abduction, but it was encouraging that they were taking specific actions to deal with their feelings of loss.  I was glad to be a part of that.

It was coincidental that I was already planning to go to Northwestern Wisconsin to be the featured speaker at a large conference of Lutheran ministers on the subject of addiction.  They all received a copy of my book, “Knowledge to Power:  Understanding and Overcoming Addiction” and other resource materials on addiction.  This all happened to work out great not only for scheduling, but these two topics of grief and addiction actually go hand in hand.

One of the main feelings that people choose to cover up with addictive agents like alcohol, drugs, food, gambling and sex is grief and loss.  I can remember countless stories told in group therapy of men and women who began drinking, drugging and other addictive behaviors after the loss of a loved one or the loss of an important relationship through break-up or divorce.  I have an entire chapter entitled, “Grief and Loss” in my book, because it is such a common precipitant for addictive behaviors.

But in addition to grief starting addictive behaviors, it is the need for a grieving process that signals a successful recovery from the disease of addiction.  So, grief has a hand in getting into the mess of addiction and in getting out of it.  Whether folks know it or not, recovery from addiction is really just one giant grieving process.  The addicted person has to grieve the loss of their best buddy:  booze, drugs, food, gambling, tobacco or even I-phones.

The process of grieving works the same as in any other kind of grieving.  First, there is the shock and denial stage.  Just like persons who have received the bad news that their family member has just died and they say things like:  “I can’t believe it”, “It can’t be” and “No”, so too is the reaction of the addictive person.  The number one symptom of the disease of addiction is in fact, denial.  The addict has a disease whose number one symptom is that it keeps telling them that they don’t have anything wrong; it is the rest of the world that is off.

Next come the really active parts of grieving with anger, bargaining and depression.  If you want to see an addict get really mad, just say anything to them about their addictive behaviors being a problem.  That is why family members of addicts tiptoe around the subject of addiction, because it gets really unpleasant around the house if you bring that up.

Then the depression sets in.  There appears to be no hope and the addicted person cannot imagine how they can live without their addictive agent.  There is a hopelessness and sometimes even a suicidal attitude.  There is no light at the end of the tunnel.  As one man in treatment told me, “From now on life is a crap pie and each day I will have to eat another slice”!

If a person, addicted or not, gets through these stages, they will eventually come to some acceptance.  Acceptance is not just admitting that what is gone is gone and is not coming back, but now being alright with that loss and a willingness to go on and get the most out of life that is possible.  Some good grievers even can eventually see opportunity in loss, but that is really good grieving.

All people, whether addicted or not face loss in this life.  The thing that determines how happy and meaningful your life will be is not whether you have any losses or not, but in how you deal with the losses that you will inevitably have.  I know people who have had some gosh awful things happen to them, but they still have joy and are positive, because they are good grievers.

For those interested in becoming a good griever, I offer the following quick tips for grieving:  1) Don’t medicate yourself – it just postpones healing, 2) Talk about what you miss most.  Time alone does not heal all wounds – talk over time heals 3) Tell yourself it is alright to grieve and don’t let anyone tell you to just “get over it” 4) Let music help your healing 5) Let yourself laugh in the midst of tears; it doesn’t mean you aren’t taking the loss seriously, just that life goes on 6) Say goodbye by writing a grief letter, journaling or going for a chat at the cemetery 7)Let go of anger and deal with the feelings underneath, hurt and fear 8) Make a sacrifice – do something nice for somebody else and get outside yourself 9) Recall the memories of the best time you had together, the things that needed to be said and what you learned 10) Rely on your family and friends – you helped them; let them help you and 11) Trust in the Lord to get you through- this is the time to pray and meditate.

Proper grieving can transform loss into eventual growth.  I wish you all good grief, because that means a good life.