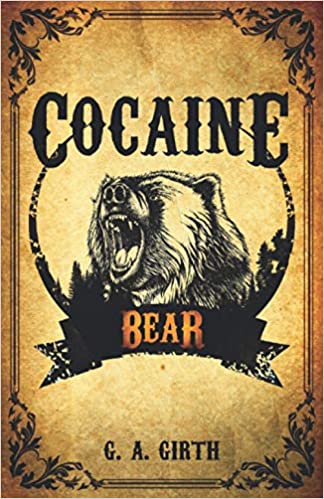 Cocaine bear is an unexpected journey of Bobert Service. Bobert Service is a man with a small dick in a small town, forever shrouded by the shadow of his grandfather–famous and immortal Canadian poet: Robert Service. Bobert has little going for him, even if he is forgiven for not being a great wordsmith of the 1800s. That is until a particular bear with a particular craving thrusts him into the thralls of adventure. Together they work to upturn the cold criminal underbelly of the Canadian Yukon. It’s a perfect partnership: the bear gets his fix of the flakes, and Bobert gets the warm, fuzzy feelings of significance that he’s been longing for. All is gory fun and games until the RCMP gets involved. And they’re pissed. Because it’s their cocaine.

The target audience for this is anyone smart enough to read but dumb enough to want to read about anything I just said. I should also add that 50 percent of the proceeds go to a charity to help with financial support for small businesses due to the Covid-19 Pandemic.

Now, who am I and why should you care? Well, the answers are that I’m nobody and you shouldn’t, but since you asked, I’ll give you the short version of my story. I was born in 1990 in Red Water, Alberta. After finishing High School I spent a few years living in my car: a 1978 Ford Pinto named Sara. I lived off of bottles that I would find in the ditch and park her beside the 7/11 on the edge of town. Sometimes a grizzly bear would come out of the woods and attack my car. I was usually eating hot melted cheese when it happened. It was scary the first few times, but then I thought: what if this bear was my friend? This was the beginning of what would become the inspiration for Cocaine Bear.

Now, the 1978 Ford Pinto had a reputation for exploding into flames when rear-ended. Like, seriously, they called it the “Man Incinerator”. But being a young, hot-headed G.A. Girth, I had an inkling for danger and kind of secretly wanted to die so I didn’t care. I was in Sara that fateful day when someone rear-ended her. The car exploded into flames immediately, but as Lady Luck would have it, I was launched out the windshield like a potato. I would’ve stayed to mourn such a tragic loss, but I was forced to flee the scene due to a lack of insurance or registration.

After the tragic accident, I was fortunate enough to get a job as a milk truck driver, but unfortunately, the bad luck didn’t stop there. One day when I was driving I was rear-ended again–this time by a semi-truck. I was wearing my seatbelt this time for some reason, and my milk truck flipped over. I was suspended upside-down slowly being drowned by the milk. The worst part of all this being I’m lactose intolerant. While I was being ‘milk-boarded’ I had a moment of clarity: I started to think that maybe it was my fault for constantly stopping suddenly on the highway. I also decided to pursue my dream of becoming an author if I ever got out of this alive. Spoiler alert, I survived, and now I live to pursue that dream! My first book? Cocaine Bear.

My hospital recovery was lengthy, mostly because I liked the attention and wanted to squeeze everything I could out of our healthcare system (like the kraft dinner and juice boxes they kept giving me) but once I left I began working on my writing. Maybe when I eventually write my biography I can focus more on my medical journey, but right now the most important thing is my fictional world. I hope you all get as lost in it as I, and it would mean a lot for you to check it out!