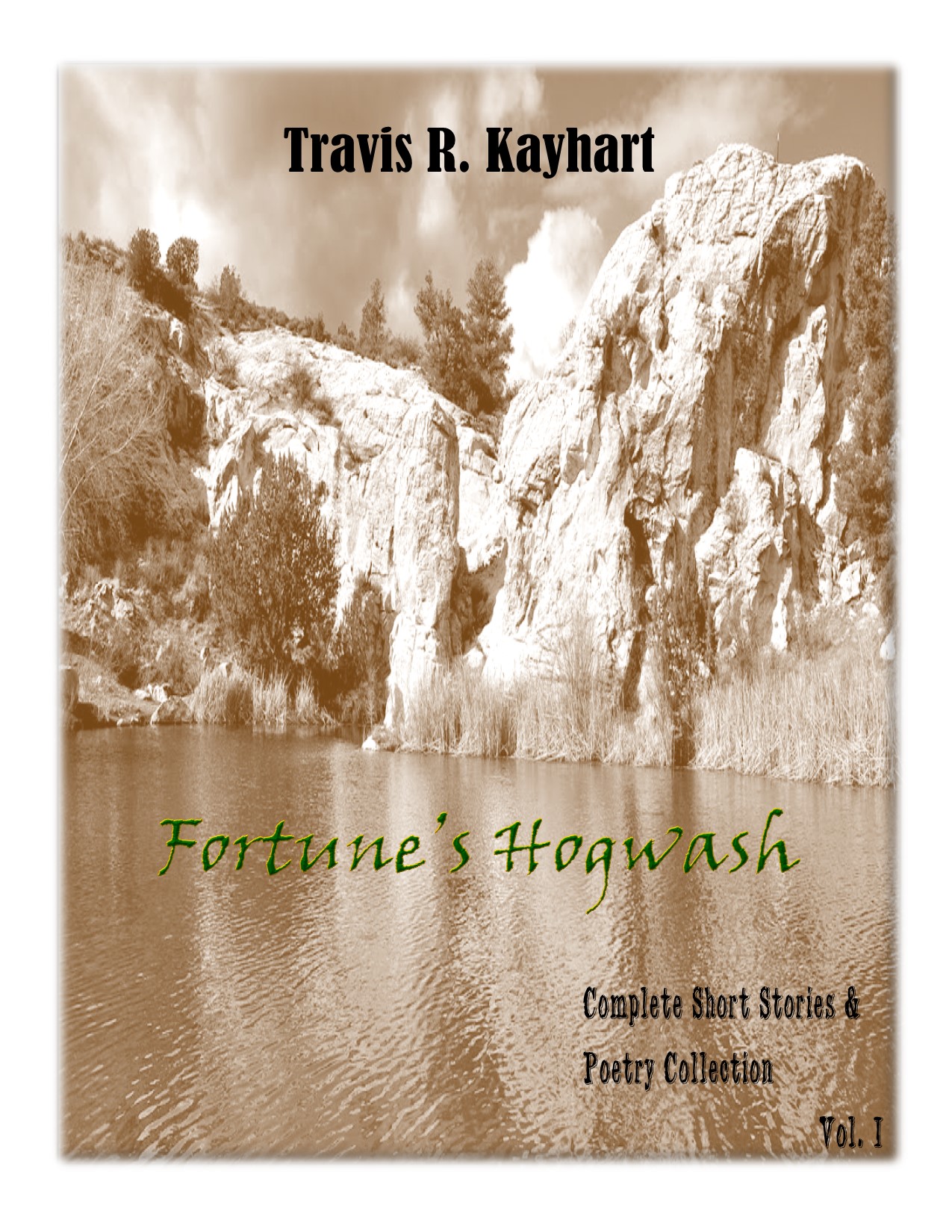 Fortune’s Hogwash has tricks up its sleeves that separates these four short stories, a memoir, and eleven poems; Art of deception, Illusion of wealth, Water chaos, Psychological traps, Ambition’s destruction, and Literacy naturalizations.

They were being cut off from the world, hidden behind their sweet songs and illusion of beautification. A cursed banshee under guard by the Knight Templars or the average guys defined the story and combined them into an art of deception.

A fly fishing adventure turned into an entrapment within the “Riches beyond the dreams.” They stumbled into the canyon’s thousand-year-old secret that has the polarity of the hidden curse and riches being cut off from the world and hidden behind the illusion of wealth with the perspective within its beauty, and the harshness attracted us.

The nature of the world exists as a force that we can affect or be affected by it. The real subject with viewing conditions is an essential part of the picture we see and convey. Nature’s atmospheric conditions set an example of man’s ambitions that led to its destruction in a message.

Human minds’ perceptions revolve around the general aspects of a long process where the concerns passed from the public’s beliefs to the realities’ private views. It was the “what” the individual saw in effect in procuring the outside force or influence on our minds.

The true grit of a wooden fence’s image with a dreamcatcher in the snow spoke as supernatural through the Native American’s cultural beliefs.

The beautification of love’s rhythm in music became romantic in tenderness. The sublimity in the love’s plainness sang in creativity.

Time. What is the time? What does that mean to us as we work, write, and play during the day? Morning to Night, the daily lives that we lead can benefit us. The impact of “Time” is vast. We have tons to do with an except for the time. The time’s gift to us is what we can do anything with it.

The question is that if we find ourselves in a dark room without a source of light? We would lose control of our sense of cosmic irony. We ask ourselves these questions and analyze how we respond to them. We condense it into our collective unconscious to maintain our binary opposition of the day/night in our daily lives.

Striking the little white ball off my big dog and play the golf game. The tensions in the game are 90 percent mental, while 10 percent is physical. It involves the knowledge and pieces of training on how to be a great golfer.

We stand on the ocean’s horizon, seeing the whitecaps rolling off the waves we forded to achieve a successful swordfishing journey. It takes us a month to gather up thousands of pounds of the fish that we catch on long-liners. Storms, rogue waves, sharks, and life-threatening situations are part of these fishermen’s daily lives.

The remaining four poems: White Elephants, A Stuck Writer, Legendary Gold, and Caught in Time, are based on Literature and scientific research. The single image could be a powerful tool to create such ideas that provoked us to write about it. We do not realize how powerful its force on our perceptions with their beauty and harshness that attract us to it.

The world that existed in our perspective was that we can affect or be affected as writers. That also provided me the inspiration to write. My writing style and tact came from multiple authors: Algernon Blackwood, Stephen King, Clive Cussler, Tom Clancy, Michael Crichton, J. R. R. Tolkien, John Grisham, Alastair Maclean, Lincoln Child, and Peter Benchley. Plus, I like to entertain readers with storytelling.

My hopes are to attract the next-generations of young and adult writers and readers to develop their basic understanding of reading and writing. My book’s plans and upcoming multiple short stories and novels continue to achieve publishing. Also, to captivate the readers into my writing ability to bring them into the imagination’s mighty force.

Travis R. Kayhart grew up both in St. George and Ogden, Utah. He earned his Bachelor’s Degree in English, Creative Writing from Dixie State University. Being deaf in his entire life, he had a passion for Aviation as well as writing. He decided to try his hand in the craft. After 25 years since he graduated from Utah School for the Deaf, he finally accumulated short stories and published twice. The poem Show and Tell is his first published work. Travis enjoys flying airplanes to witness aerial views of the magnificent southern Utah landscape. Travis is a native of St. George, Utah.

In 1985, at the Utah School for the Deaf in Ogden, Utah, he composed a flash fiction piece and won a writing contest prize. It was Squeeze or Bust. He didn’t publish that poem, Show and Tell, through the Dixie State University’s Route7Review (now defunct) for the first time, though he did his short bio for the R7R. He found two folders during closet clean-out: a green manila folder with a copy of the When Picture Tell a Story, the non-fiction piece he did for Gallaudet University’s national magazine, World Around you, and he was awarded $150 for the first prize in 1990. The second one was a yellow manila folder—stapled at the end—the title jumped out: 1985 U.S.D. Writing Contest. Now, it begins…