The World Behind Words by Mars D. Gill 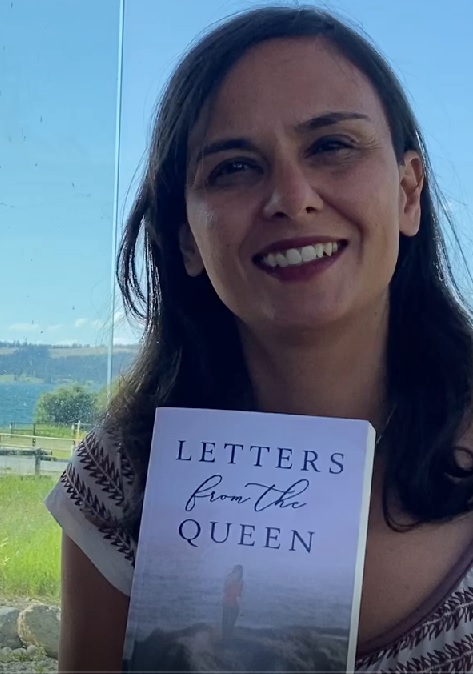 Summer of 1984. A pair of hands scooped me out from under the table. My uncle led me outside into the dark, hollow night and placed me up on a pedestal. Now I was taller than him and able to see above the fence. But I refused, eyes pinched tightly. Tears rained down my face, and my body broke into tremors. For a moment, I felt I peed in my summer dress, and I crossed my legs.

“Do you see anything?” he asked.

I opened my eyes.

Only stars dotted the night sky. Only the wind rustled the leaves. But the shots . . . I shook my head.

“Then why hide under the table?”

My uncle was telling me that gunfire was too far to hurt us.

But it didn’t matter how far or near. It mattered that this was happening anywhere in the world. And I could hear it. My heart thundered with each beat. It was the first day I realized my identity as a Sikh. I was four years old when gunfire rained down at the heart of Amritsar in Punjab, India. Not terrorists but the Indian army attacked Sikh’s holiest place: The Golden Temple. Since then, an entire array of Sikhs has migrated to America seeking asylum.

Summer of 1998. I, too, stepped foot in America to study Computer Science, bracing the American tales my grandfather had shared—of immigrants, dreams, and hope. I wasn’t seeking asylum from India, but the memories traveled with me.

Summer of 2001. On September 10, I started my first tech job. The next day, as the second plane hit the World Trade Center, questions swirled inside my head: Who would do something so demeaning and for what purpose? The ancient gunfire came to mind. And my colleagues were puzzled, too, as one said to me: “Look, what your people did to us.”

Winter of 2017. When I sat down writing the book, Land of Dreams, in February these memories galvanized and sputtered onto the pages. A handful of dates had planted their seeds: first in 1984, then resown in 2001. And then, anytime, a turbaned Sikh was killed or assaulted.

People say writers write to discover answers to life’s questions. That may be the deepest truth behind why I wrote this book.

I live in Chicago with three rambunctious children and my husband, still perplexed by our divides: Political parties. Indian Army and the one who hid inside the temple. Races. Colors. Uniforms. Borders.

Winter of 2018. As I was revising the book, we visited the Golden Temple, where no semblance of bullet holes or debris remained. Only holy hymns rang in the air. Yet, my questions remained unanswered, mere shards of words peeked through Land of Dreams.

Spring 2021. Land of Dreams is targeted to release, and with great pleasure, I introduce it for the first time to the Author’s Lounge.

Meet Siana Singh: She’s a struggling track-and-field athlete who is figuring out her place in her traditional Punjabi family and among her American friends in San Francisco. Her world is regimented—competing in sports tournaments, training for the Olympic Gold, and spending one hour of her week with her therapist Dr. Silverstone, where she pretends her father is alive.

Meet Dr. Silverstone: She’s a therapist whose primary goal is to be an exemplary mother. Living her life guided by deep faith, she lost her daughter to 9/11 and her son to a crime when he killed an immigrant on the streets of San Francisco. She cannot get her daughter back but vows to help her son—no matter the cost, even if it breaks up her marriage.

Siana and the doctor feed off each other. For Siana, Dr. Silverstone’s warmth serves as a parental figure; for the doctor, Siana represents hope as if by helping her, she would help her son, too.

But everything changes when the doctor discovers the woman who has vowed to destroy her son, the woman whose father her son murdered is none other than her patient Siana.

Both sides discover the path to justice isn’t as straightforward as winning a court case.

Poignant, heartwarming, Land of Dreams is a story not about our tragedies but about how we overcome them as Siana faces the ultimate test of realizing her late father’s dreams–the Olympic Gold.

Land of Dreams is an #ownvoices narration of being a Sikh in America. It is Women’s Fiction with a dash of Domestic Fiction similar to Eleanor Oliphant is Completely Fine, and the movie Bend it like Beckham, except the setting is in USA.

I self-published my debut Romance Suspense novel Letters from the Queen in May 2020. It opened to a warm reception and has earned 4.5/5.0 ratings on Amazon.

Readers who enjoy self-discovery journeys that go from broken to whole, from lost to found, from sad to happy will enjoy my books. I feature strong female characters: be it Siana, who is a naïve, self-critical fighter in Land of Dreams, or Anna, who is pregnant, amnesiac, and abandoned in Hawaii in Letters from the Queen, or Joy, who is a superstitious astronaut in my upcoming third book.

Thank you for letting me share a bit of myself with you. I look forward to learning more about Author’s Lounge.