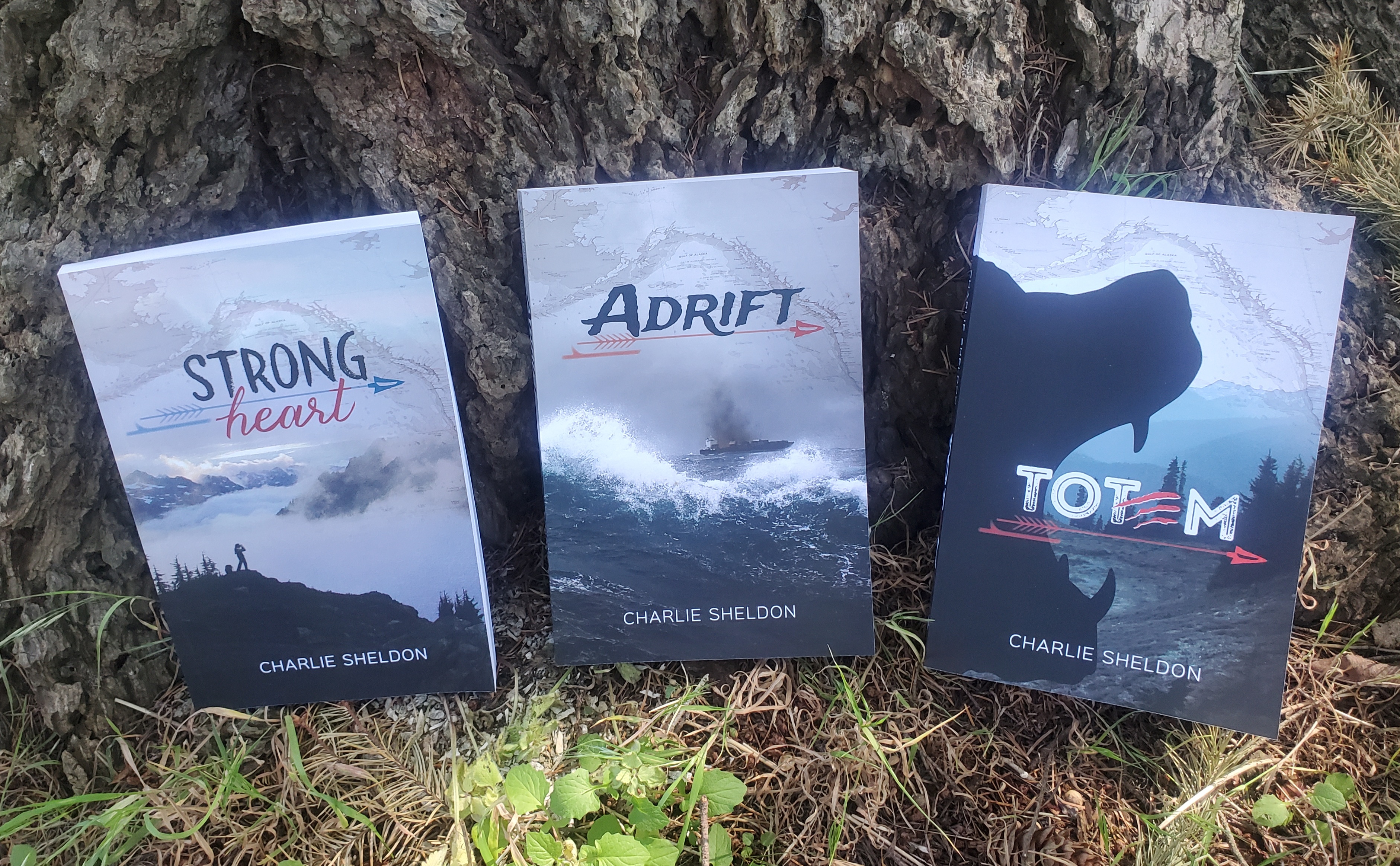 Elizabeth Schultz of Author’s Lounge kindly asked me to say a few words about my novel Strong Heart, which was published in March, 2017 and is the first of three books in the Strong Heart Series. the other two being Adrift (2018) and Totem ( coming October 29, 2021).

Strong Heart tells the story of an ornery 13 year old girl, Sarah Cooley, who appears one rainy night at Tom Olsen’s door to be dumped off by Tom’s ex wife with the announcement Sarah is Tom’s granddaughter. Tom, about to start a spring backpacking trip with his close friend William and William’s 29 year old daughter Myra, to visit his own grandfather’s grave deep in the wilderness, doesn’t know what to do. They reluctantly decide to bring Sarah along.

Sarah has never been hiking and hates it. At the end of the second day Sarah goes on up the trail with her sketchpad, and returns an hour later with a drawing of a bear. The drawing is perfect but unlike any bear the adults have seen. Sarah is furious when they question whether she saw what she drew. Myra, who is an archeologist working for the Sol Duc tribe, of which she is a member, tells her father and Tom Sarah has drawn a short face bear. Then she says short face bears went extinct 12,000 years ago.

Just then they are passed by a group of surveyors, members of Buckhorn Corporation, which has a grandfathered permit to mine a trace mineral, erbium, from an area not far from Tom’s grandfather’s grave. Myra is opposed to the mining. The Buckhorn people are polite, but hostile.

The third day, finally at Tom’s grandfather’s grave, Sarah disappears. Tom, William and Myra, and the Buckhorn surveyors and others, undertake a great search, day after day. Finally everyone but Tom, Myra and William give up. Tom and his friends remain, and on the eighth day, Sara appears. She tells an impossible story. Then their real adventure begins.

Strong Heart is general fiction with magic realism, a coming of age story, but also a story of ancient legends and ancient truth, set on Washington’s Olympic Peninsula. The work is based on my research, years spent hiking in Olympic National Park, years at sea as a commercial fisherman and merchant sailor, and many years working with local tribes negotiating fishing agreements between tribal fishermen and commercial ships while I worked at seaports.

I became fascinated with an ancient legend shared among many North American tribes – that they have always been here, forever, that they did not come across on the land bridge. Of course, this belief runs counter to the theory that humans only arrived in the Americas in the last 15,000 years, over the land bridge, at the end of the last ice age. I wondered, though, could these ancient beliefs be true; and, if so, how?

I also wanted to do a story structured as stories have been told forever, around fires, before bedtime, at sea while laying to in a storm. There are a host of theories as to why we humans became “modern” about 70,000 years ago – art, burial, technology – and it seemed to me, based on the readings I have done, it was actually the telling of stories that must have made us human – the ability to use language, to carry memory generation to generation, to build a culture, to explain the world around us to our children so they could survive. I wanted to do a novel based on stories within stories, and I hope I have. I know I have in the entire series.

Originally when I wrote Strong Heart the frame was like that of Conrad’s Heart of Darkness, where a group of people heard a story told while awaiting the turn of the tide. In my case I had a lifeboat crash ashore on Haida Gwaii, off British Columbia, with the crew trapped behind rugged mountains in December, isolated, and William telling them a story to keep them sane – Strong Heart. I stripped away that frame for the first book, but then wondered, what happened to that lifeboat, and how did it get there, what happened to the ship?

This then became the second book in the series, Adrift, opening four months after Strong Heart ends, when the Seattle Express catches fire and William goes missing, the ship must be found and retrieved, and Sarah and Myra and others hatch a desperate plan of rescue.

The third and final book is Totem, which begins the following spring, just a year after Strong Heart begins, when some of the same characters, and others, return to the Park and the conflict with Buckhorn and face mysteries of strange animals, mysterious elk kills, and growing awareness some of the ancient legends might be true.

These tales can be read in any order, certainly the first two, they are each a stand alone book, but together they tell a broad story, hopefully one the reader finds entertaining and also one leaving them wondering, at the end, how much could be true – is true – might have happened – did happen.

In the end, as a writer, all I want is the reader to fall into the tale, be lost in it, there. If that happens, I cannot ask for more. All my life I have loved stories, read stories, found stories, and tried as best I can to merge the experiences I have had in a scattered and strange life arc into something that can offer a consistent, entertaining series of tales that entertain and, also, perhaps provoke.

Totem will be published October 29, 2021, by IronTwine Press, and until then Strong Heart and Adrift are both available on Amazon Kindle for 99 cents in hopes others will dig into the series as a way to best enjoy the twice-as-long finale. But I recommend the “real” books, beautifully designed by Sonja Gerrard and IronTwine Press, for the best experience.

You can purchase Strong Heart series on Amazon: