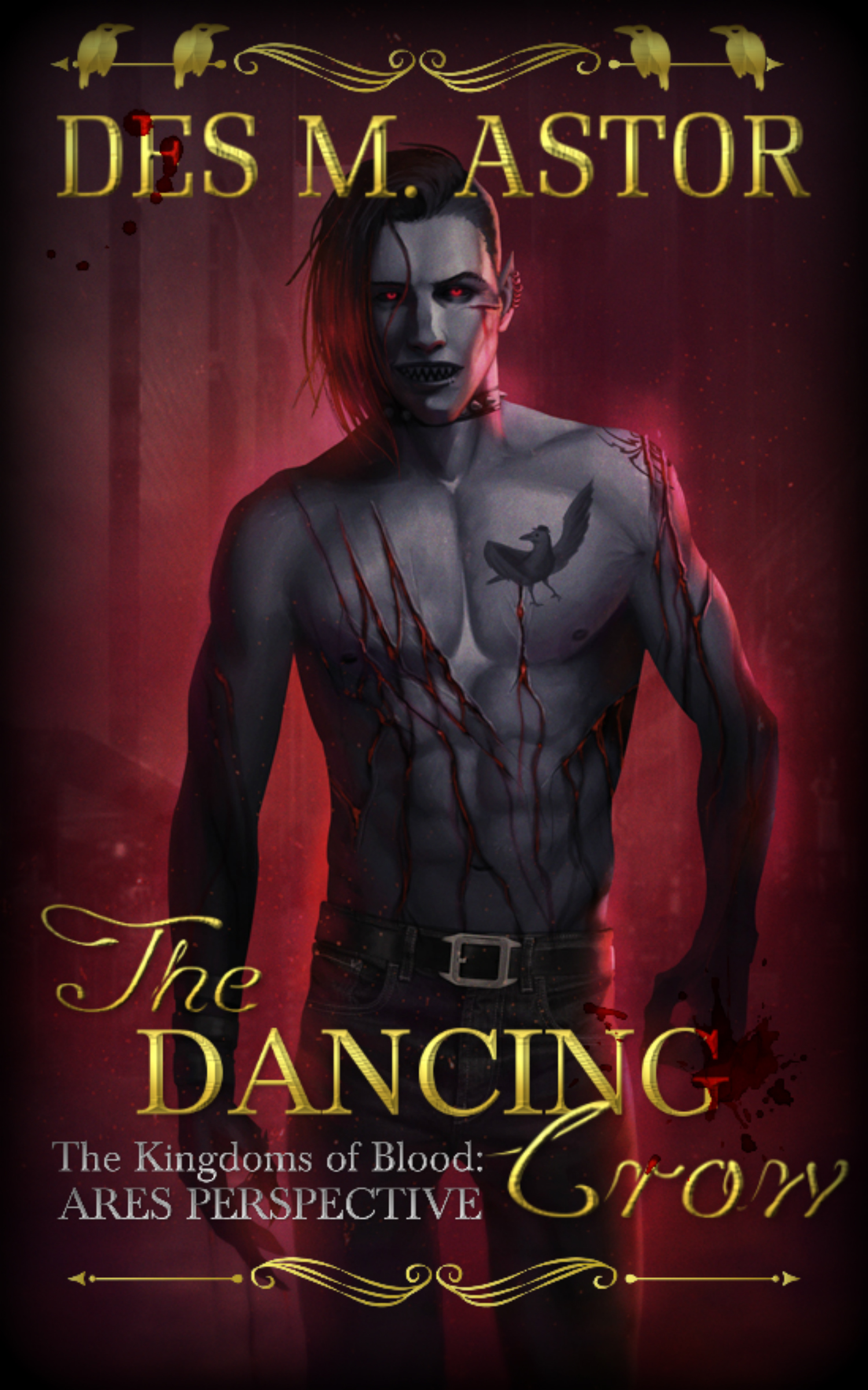 Summary of The Dancing Crow:

An unusual twist on vampires as seen on the lore website here, The Dancing Crow follows Ares, a vampire gang leader with a chaotic need to be a hero. This gory dystopic urban fantasy follows him as he defends the city from other vampires that have taken Earth for themselves. Life as humans know it changes forever when the vampires emerged from the shadows, bringing magic and mayhem with them. It’s up to monsters with morals like Ares to rip their city away from tyrants like Ash Elapid, a vampire starving for power.

Matters are complicated even further as we realize the vampires can’t be slain by ‘traditionally thought’ methods aside from silver. They don’t burn in the sun, neither crosses nor garlic work, and they have a mouth full of blade-like fangs as opposed to two. No wonder the world gets entirely ripped from our grasp, especially given we erased magic from our history books.

While the end of humanity is broadcasted in real time on television by vampires that infiltrated the government long ago, Ares must work with his gang, a half-dragon, a Tasmanian devil shapeshifter, and other vampires to establish a city of harmony, one of the few sanctuaries in the end of the world as humanity knows it. Oh, and as he is working hard with all of this, he is being stalked by a vengeful vampire hunter who is indoctrinated by a religious cult. Though he did nothing to Cecelia Smoke, she won’t leave him alone. She can’t kill him, so why won’t she give up?! He’s got a city to save, and she keeps getting in the way.

Ares was a side character from a book I wrote called Red Viper, but I fell in love with him as an original character so much that I wanted to write book one in The Kingdoms of Blood series from his perspective. My writing had improved since I wrote the first book anyway, so I was able to tackle deeper messages in this one and world build a bit better. As for my series as a whole, they say to ‘write what you want to read’. I’m not someone who likes writing to the ‘meta’, and I’ve always wanted a vampire series of my own. I felt that utilizing my knowledge with biology would be really interesting when applied to magical creatures, which I used for my vampire lore.

My target audience is definitely new adults, specifically those who love vampires or urban fantasy in general. This is somewhat tricky, as I don’t follow traditional lore aside from the blood-drinking and enhanced senses/speed/strength. In fact, I break the rules of most monster/myth lore in my book, because I feel it is very important to bring something new to the table. Those who love urban fantasy, a twist on vampires, and a dash of biological science in their fantasy will likely enjoy this series. After all, I bring the bite back to vampires with my books. Something important to note is the nuance; I am heavily against the ‘all members of this species are evil’ trope, and therefore there will always be a healthy mix in mine. I’m hoping there are some readers on the Authors’ Lounge who may be interested in picking it up!

I try to teach important lessons with my book along with entertainment. Many of my messages show the horror of religious indoctrination, the trauma following trafficking, that sex workers can be just as powerful and valid as any other character, consent with BDSM relationships and what a non-toxic one should look like, that there’s a ton of nuance in a world that isn’t just black and white, and more. I want readers to laugh and cry with me, along with fall in love with my characters as much as I have. I want to introduce them to a whole new world that they can lose themselves in, and most importantly, I want to bring magic into their lives. That is why I love urban fantasy so much. We can look around, in our era, and see magic all around us through the use of our writing.

I plan on possibly doing some book signings, and as for the future of this book and world I built, there will be one final series following my magical college Cobratongue University: Professors & Kings & its sequel. That one will star Clarice as a main character; she is a side character featured in The Dancing Crow, but is destined to go on a major adventure to find a city of dragons with a few other side characters from the various series in the Vampire Wars universe. Otherwise, I will be writing short stories that take place in the world I’ve built, so even if I finish my planned novels, there will be more content. If my series does ever take off, I am definitely not opposed to expanding ideas and books for it. Also, I am super interested in visual novels for my works, but I do not have artistic talent on that end yet.

What is something else about yourself that you would like to say?

I’d love to get a full set of slip-on cosmetic dagger-like teeth to match my vampires, and maybe cosplay someday as a vampire from my series. That would be so cool! Also, I play MMORPGs. As of right now, I play Final Fantasy XIV and am really loving it. Finally, I commission a lot of art of my characters (this can be seen on my website); the images used in this post are those I’ve both commissioned and bought the copyright for! Thank you so much for featuring me, Authors’ Lounge!