Over the Broad Earth by J.L. Feuerstack 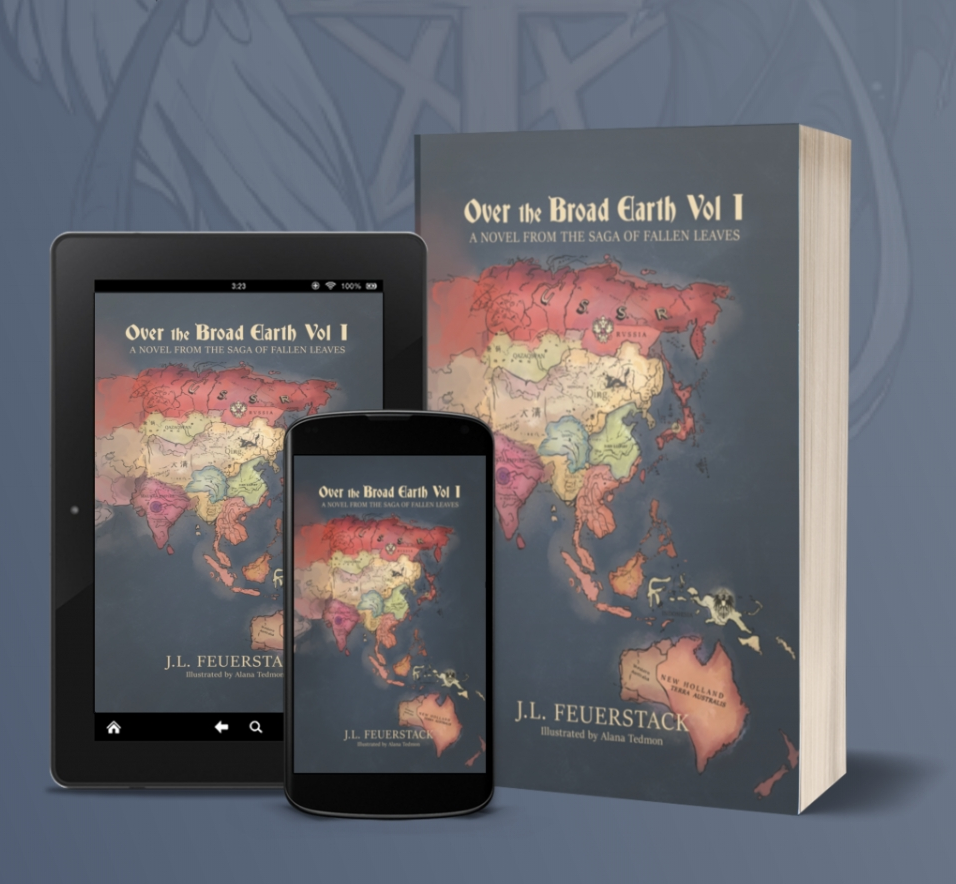 J.L. Feuerstack’s Over the Broad Earth is a great book for fans of Fantasy, Historical, or Military Fiction. It is the first book from the Saga of Fallen Leaves series. The story offers readers an intriguing, alternate lens through which to see the numerous locales and personas of history.

Over the Broad Earth presents a sweeping fantasy tale of the eternal struggle between Angels and Demons. This imaginative tale tracks the continuing contest of two Celestial brothers, God and Satan, who, by ancient decree, can only unleash their sibling rivalry when human beings engage in combat.

The citizens of both Heaven and Hell endure all the emotions and circumstances of the humans they routinely inhabit, love, valor, passion, treachery, bravery, and heartache. Readers will follow the exploits of two of the greatest “eternal” warriors of the ages: Lord Zinc II (Heaven) and Schizophrenia “Schitz” Incenderos Nervosa (Hell). The rivals battle one another throughout history from the struggle between the Babylonians and Assyrians in the desert through and beyond the teeming jungles of Southeast Asia.

Along the way, these intrepid fighters interact with a host of characters (Moses, Alexander the Great, Napoleon, and more), friends, fiends, and lovers. Displaying the same traits of compassion and selfishness known to all of Creation, Schitz and Zinc lead their soldiers – and try to stay alive.

Here is an introduction to Lord Zinc II and Schizophrenia “Schitz” Incenderos Nervosa from Over the Broad Earth Volume I:

“That’s not a positive development,” Zinc said. “You question my control. Are you sure you can hold up your part of the bargain?”

Schitz waved his hand in dismissal of the quip.

“Well, don’t let him wipe out humanity,” Zinc said. “Remember our balance is not just Celestial beings; the mortals must be in balance as well.”

Schitz inhaled fiercely but remained calm, and replied, “There are new Demons from the current academy class crafting their disorders; they’re working at the CIA cooking up something much worse than AIDS. I’ll keep them in control and AIDS and all the others.”  He added, “Don’t forget about your Co-Commander Uranium II cocking everything up with the damned nukes. Now the defunct Soviet government is so caught up in capitalism it can’t keep its own organization straight. Tell me that’s not a greater threat than AIDS to the stability of the mortals.”

Zinc shrugged. “Just another part of the equation, I suppose. But it is an equation that keeps becoming more and more complex. What’s worse, AIDS or Oppenheimer and the Manhattan Project? We’ve both put things in play that could bring the house down.”

“It seems like we’re both in need of better housekeeping moving forward,” Schitz said with irritation in his voice.

Zinc smirked, cycling back to a statement Schitz had made earlier. “Your boys really do like the CIA.”

“And you like the UN,” Schitz replied with disgust in his voice.

“Can’t hide your distaste for our global empire?” Zinc asked.

“Even working together with you, I could never like the United Nations; I didn’t like you when you were the League of Nations,” Schitz said. He laughed without humor.

“I don’t think we liked us when we were the League of Nations,” Zinc said.

Both laughed, but neither took their eyes off the other. It was as it had always been, an alliance of untrusting equals.

Author, J.L Feuerstack, holds a BA from Washington & Lee University and a MA from Queens College, both in the study of Psychology. It was during this time of study that he began refining his idea of an invisible struggle that played out across human history. A story that offered an alternate viewpoint and in some cases an alternate explanation for the battles and events that have shaped the progress of humanity.

Readers will enjoy over 100 illustrations created by the talented Alana Tedmon.  Alana Tedmon holds a BFA from the Art Institute of Dallas and also studied illustration under award-winning artists, including Edward Kinsella and Sterling Hundley. Over the Broad Earth contains a vast display of beautiful images detailing characters, items, and scenes from the story.

Readers of Over the Broad Earth will experience an immersive journey that includes music, poetry, and languages from different periods of history. Featuring original lyrics and poetry by J.L. Feuerstack. All while following the exploits, trials, and tribulations of a host of unique and intriguing characters.

The Authors’ Lounge offers the opportunity to connect new and aspiring authors with readers. Featuring stories and the story behind the book.

Over the Broad Earth is available for purchase on Amazon https://www.amazon.com/dp/B09KQ5TTCQ