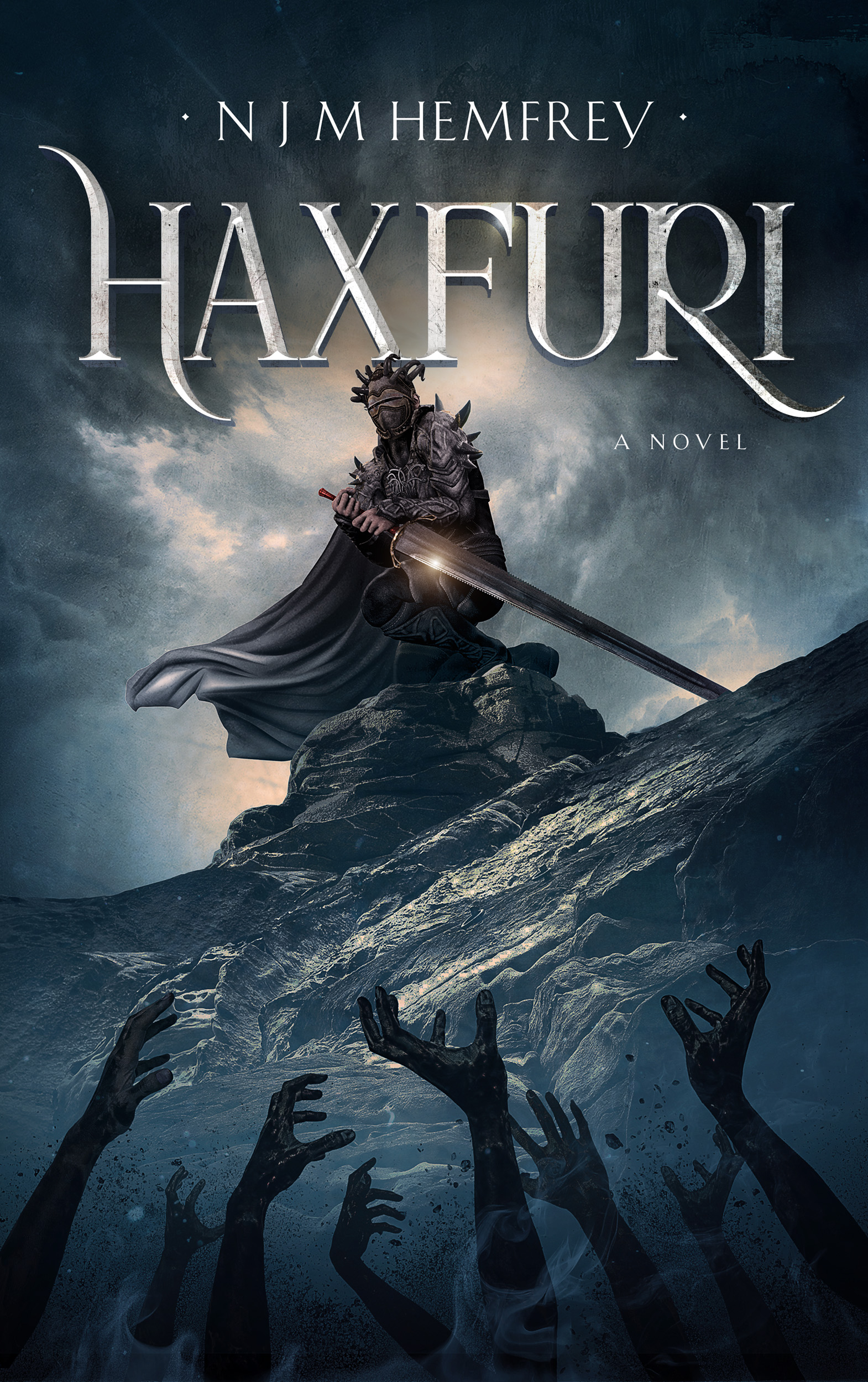 Haxfuri is a cosmic grimdark horror that doesn’t care about your feelings, and I mean that in the sense that it’s content will challenge your beliefs, your ethics, your sanity, and imbalance your grip on your own humanity. There are some graphic sections, reader be warned, and is full of grit, consequence, and philosophical punch. The story follows an aged Lord who has spent decades assuming the role of his dangerous alter-ego Haxfuri to fight injustice. Unfortunately, he fails to prevent a plot by his arch-nemesis and opens the door to apocalypse. As a dangerous, parasitic, and sentient plague spreads without end across the realm, the King enforces increasingly misogynistic, sadistic, and patriarchal practices to fight the witches and heretics he blames. Haxfuri’s home city of Skrimgool is set to be cleansed and he must recruit his old team if there is any hope of stopping the genocide. All the while, the blood red horizon brims with the dawn of a mysterious cult and their promises to bring forth a new god that will transform the world in its own image. The story explores the flaws of ideologies, human nature, and moral agendas, revealing how differing perspectives can find sensible reasons to justify almost anything, no matter how dreadful and atrocious the consequences.

Haxfuri actually started out as a 100-page Batman fan fiction set in the medieval age. While writing this fan fiction, I was incorporating so many of my own unique elements that my partner suggested I turn it into my own thing, and it is unrecognisable from that initial 100-page manuscript. As a student of philosophy and sociology, the elements I explore and dissect were inspired by my own research into religions, moralities, and societies. I’ve always been fascinated by the principles that groups of people can construct in reaction to trying to deal with the unappealing nature of reality. These principles are heavily influenced by our emotional preferences, the paradoxes of trying to remain sane, and the need to carve the world into an image that suits our viewpoint. The story also reflects many issues present in our world and starkly revealed by the #MeToo movement, the Trump Era, and Black Lives Matter. Moreover, my grimdark fantasy is infused with an atmosphere of cosmic horror, as I am a fan of H.P. Lovecraft’s fiction, and I think transdimensional creatures and realms can provide excellent avenues into facing thoughts beyond our comprehension, thoughts which can reveal the essence of our existence and behaviour.

My book’s target is 18+, due to the graphic nature of some scenes, the hyper-violence in others, and the complexity of the ethical and societal issues I explore. Haxfuri is for fans of grimdark fantasy where amorality reigns and the descent into nihilistic oblivion is inevitable.

I hope my readers receive a very atmospheric and cinematic adventure, full of vivid imagery, fleshed-out characters, and relentless action set-pieces, on a truly mythological scale. I also hope they are challenged by the content and, perhaps, forced to re-evaluate the mechanics of their own beliefs and the inconsistencies inherent in their moral views, inconsistencies prevalent in all human beings. Without questioning our own views seriously, and discovering our flaws, we can’t grasp the harms we may be causing due to our own misplaced senses of righteousness. In any case, readers will get a story where consequences truly matter and there are no easy resolutions, set in a dark fantasy world they will never forget.

Haxfuri is part of a future trilogy of books and many other stories set within its universe and mythology. I have a 20-page outline already written for a prequel book following a different character and their history, inspired by Akira Kurosawa’s Seven Samurai, among other things. For Haxfuri, I would love to be able to do an audio book in the coming years, and I already have one interested party who would be awesome to work with. In my wildest dreams, I would hope Haxfuri could become as popular as The Witcher series, and have its own graphic novels, tv shows, and games, as I do believe it has the endless scope and potential to become such. For now, I aim to improve Haxfuri’s visibility through doing more articles, like this one that the Authors’ Lounge very kindly gave me the great opportunity to write.

I am 28 years old and live in Scotland with my partner, who is the best individual to spend existence with, whether in lockdown, the apocalypse, or when doing more normal things like the cinema, or wandering around old castles. I have degrees in Philosophy and Sociology, and Information and Library Studies, so I always aim to infuse my books with information, imagination, and thought that is atypical. For me, books and stories are large thought experiments that tug at our heart strings, provoke our minds, and encourage us to learn something new. If a book isn’t doing that, then why bother reading?

As a self-published author, I love the control I have over choosing who I work with to design the cover and edit my work, and I really appreciate how I can work at my own pace. As the work falls almost completely on myself, this can also be very stressful while I balance this with another job and the needs of life. Marketing in particular is very time consuming, as well as creating the materials, but it’s also heavily rewarding to be involved in the act of creation nearly all the time. There is no better, fulfilling, sometimes nightmarish, feeling in the world.