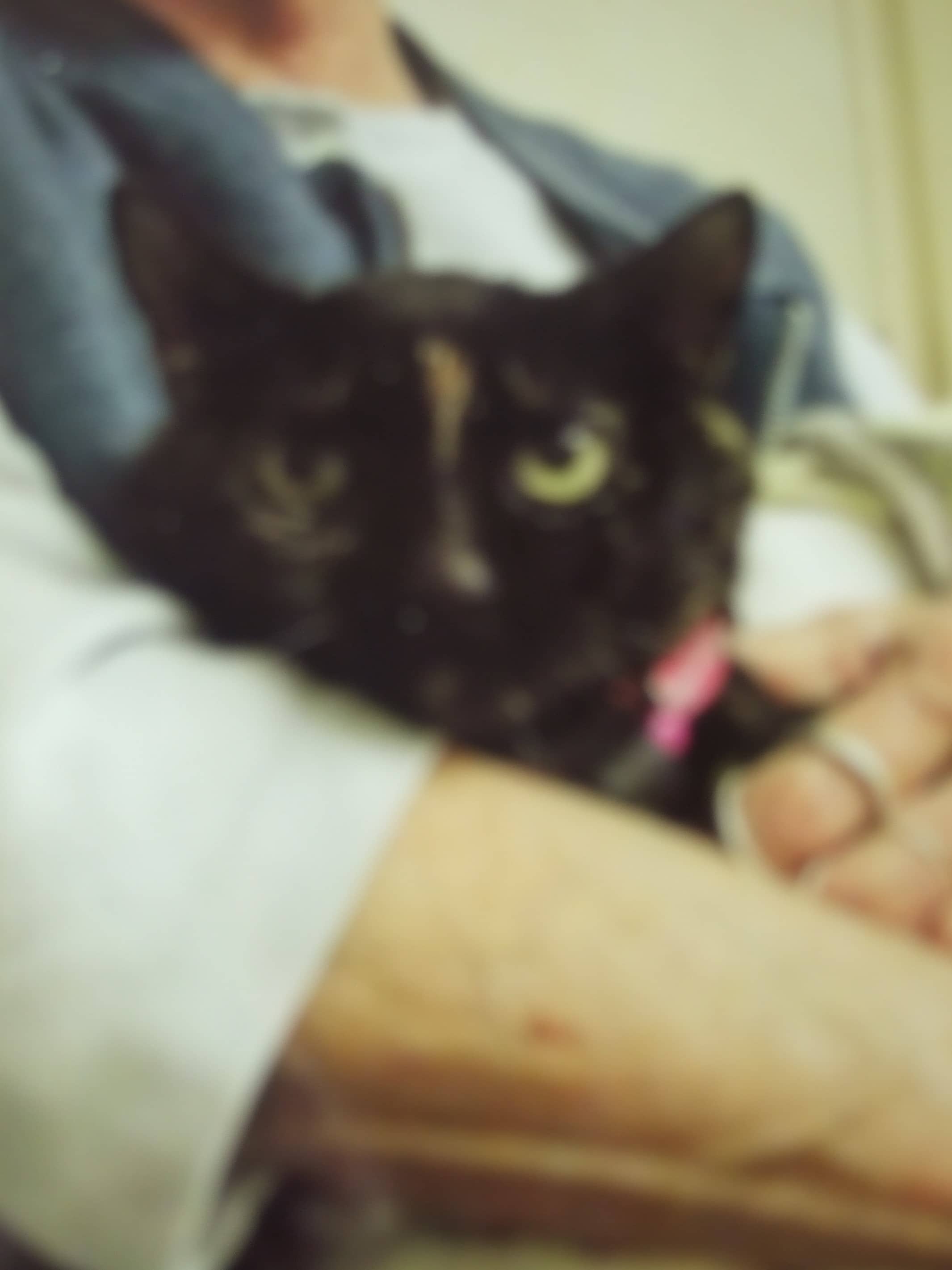 I would like to introduce you to Elvira.  She is one of the main characters in my novel, William and Tibby Forever.  I almost missed out on having her in my life.  I was looking for a white or a yellow kitten.  When I went to the house of a friend who had kittens to give away, I spotted one that fit the bill almost immediately.  I was headed in its direction when my sister, who was with me, pointed to a kitten a few feet away.  “Oh, Lynda, this is the cat you need.”  I looked in the direction she was pointing.  Next to the steps of the house’s sundeck stood a scrawny, beetle-browed black kitten, with huge yellow eyes and not a bit of fluff on her.  My sister was right.  I immediately knew this was the cat I was supposed to have.​

Unfortunately, Elvira was not of the same sentiment.  When she saw me take a step in her direction, she immediately fled under the sundeck.  I had to pay my friend’s son 25 cents to crawl under the deck and chase her out.  When she ran out, she ran right into my sister and me.  She   looked at me and then at my sister.  Then she made a mad dash between us.  I reached down and scooped her into my hands as she ran past.  I put her inside the flap of my overalls so she could get used to my smell and drove her home.  And she has been part of that home for almost 19 years.  But if I had not asked my sister to go with me that day and had she not gone, Elvira might not have been part of my life.  And I might not have written William and Tibby Forever.  On what small, seemingly inconsequential decisions do our lives rest.​

Everyone thinks that I named Elvira after the song of that name by the Oak Ridge Boys.  But that is not the case.  I always take my time in naming a new cat so the name will fit.   When I saw my cat Tibby, who was soft and fluffy and round, I knew immediately that she should be named Tibby.   But naming Elvira was an entirely different matter. I tried a few like Muffin, Suki, Twinkle, but none worked. After about three days, I was beginning to wonder if I would come up with a name.​

Not to worry.  I finally did come up with a name, a perfect one.  Now, Elvira was a very witchy looking cat with black fur highlighted by tan and brown tortoiseshell markings.  Her paw pads were black, her whiskers were black, her nose was black. And her huge yellow eyes held me in thrall, bewitching me totally.  As I was brushing her off one day, with those thoughts in mind, her name came to me.  I had once encountered a witch named Elvira.  I’m not sure where I met her.  In a book or a movie–somewhere like that. She was not a bad witch, but she was an enchanting one, wrapping her victims in her charms and spells and the lure of her eyes.  Just like my cat.  So I decided to name my cat after that witch.  And so Elvira became Elvira.  I think the name suits her to a “T.”​

I cannot imagine my house without her.  She is now blind and deaf.  She suffers from kidney failure, a condition not uncommon to an old cat of nineteen years.   But she just keeps keeping on.  She had her left leg amputated when she six.  I was told she would probably live 2-3 years more.  She has lived 12 years more.​

I pretty well had William and Tibby Forever finished when she had to have her amputation. Since this is a novel about life in this world and the next, as seen from a cat’s point of view and since catastrophic illnesses are a common fact of life, I felt that I should include the events surrounding her illness in the book, focusing mainly on how she and I coped with it.  Needless to say, being Elvira, she sailed right through the whole thing, from her first diagnosis to the morning a year later when she ran up a tree after a bird.  I, however, was the basket case.  I have learned so much from her and I keep on learning.  Well, I hope you enjoyed meeting Elvira, a very important cat in William and Tibby Forever and in my life.​