It’s Just Not That Complicated By John F Hodgson 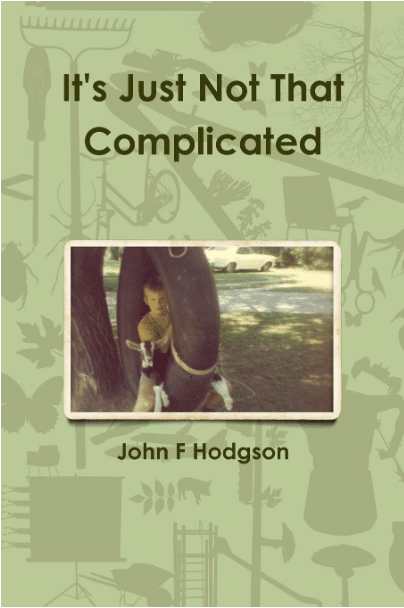 In this book you will encounter some unusual situations involving my friends, my relatives, my wife, my children, a nosy neighbor, goats, sheep, cows, pigs, rabbits, deer, and assorted wildlife in Texas and Kentucky. Over the years, I have gradually become aware that the Creator is talking to us all the time. He does not shout, but instead he uses the subtlety of his Creation to illustrate his character. He uses everyday situations to instruct us in his truth. The Bible says that He inhabits the praise of His people, and I think that He must also laugh with us, at the situations we get ourselves into. I seem to get into a lot of them…
I invite you to step into my memories for a moment as you read, and enjoy the view. 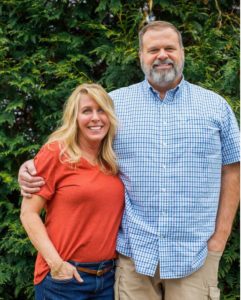 I have always thrived on being connected to nature.  I relish the feel of warm garden soil on my bare feet in the spring, the smell of fresh cut grass in the summer, the visual feast of fall colors, and the sounds of utter peace as snow falls on a glade of evergreens.  My father was a great observer of the ordinary: he could sit for hours watching faces in a crowd, ants working, or a bird building a nest – and be perfectly content.  My mother always had the need to write about that which she felt and experienced.  That love of observation was passed on to me, along with the need to write about it.

Over the years, I have gradually become aware that the Creator is talking to us all the time.  He does not shout, but instead quietly uses the subtlety of his Creation to illustrate his character.  He uses everyday situations to instruct us in his truth.  The Bible says that he inhabits the praise of his people, and I think he must also laugh with us, at the situations we humans get ourselves into.  I seem to get into a lot of them. They say good judgement comes from experience, and experience comes from bad judgement. Some of the most profound learning moments for me have been immediately after I did something that didn’t work out very well. For instance, nothing focuses your attention like having a 650-pound rodeo steer trying to cave your head in.  Here is an excerpt from one of the stories in the book, called “My First Rodeo”:

“I should have pondered the consequences of the fact that I had no idea how to wrestle a steer, or that the steer in question weighed in excess of 650 pounds, and had long horns to boot.

On the appointed night, I crawled into the starting gate or “chute” with my wrestling partner.  He seemed a bit ill-tempered as I gripped his three-foot horns securely and held on.  I heard a horn blare loudly from somewhere over my head, the door to the chute flew open, and a cowboy hit the steer right in the rump roast with a 10,000-volt shock from an electric cattle prod.  The immediate sensation was something like getting pulled out of the water by a ski boat – my body streamed back horizontally from my death grip on the horns.

About a half second later, as he skidded to a sudden stop, the laws of physics caused my body to sail over his head and land upside down in the dirt, while keeping my death grip on the horns.  I suddenly found myself nose to nose with a very angry bovine.  I briefly considered letting go of his horns, while he briefly considered stomping my head into the dirt.  In desperation, I summoned all of my strength and turned his head like a steering wheel, dislocating my shoulder in the process.  He fell on his side, and I sprinted like a rabbit for the safety of the side rails.  Over the laughter of the crowd, I heard the announcer say: “A new school record!  4.7 seconds!”   My record lasted for about 15 minutes, until somebody showed up who knew what he was doing.  My dislocated shoulder lasted about 6 weeks.”

Experiences like these, and the deep thinking that went on in the moments afterward, have taught me some valuable lessons.  For a decade I put my kids to bed with stories of some of my exploits, hoping that my young son would learn from my mistakes, rather than having to make the mistakes himself. Thankfully, most of the lessons stuck.  That was the genesis of this book, some great stories of personal experience, told to friends and family for years, that I finally put down in written form.  I also added a “thinking deeper” section after many of the stories, highlighting some of the biblical truth I learned from these experiences.  The title “It’s Just Not That Complicated” sort of presented itself in my mind as I finished the collection.

Reception from readers has been very positive, they enjoy the format of a bunch of loosely connected stories that only require a 5-minute commitment to read each, and leave you with a smile, a laugh, or sometimes a deeper thought to ponder for the day.  In this hectic world, reminiscing about times when we were closer to nature and closer to family can be very soothing.

I have another batch of stories that may come out in a sequel, most appropriate for fathers of growing sons.  Story telling can help break down some of the communication barriers of adolescence, and the mental images help the lessons stick.

Writing for me is cathartic, and stems from a desire to share what I have learned about the world with others.