How a young girl’s doubt about Jesus – will build your child’s faith. 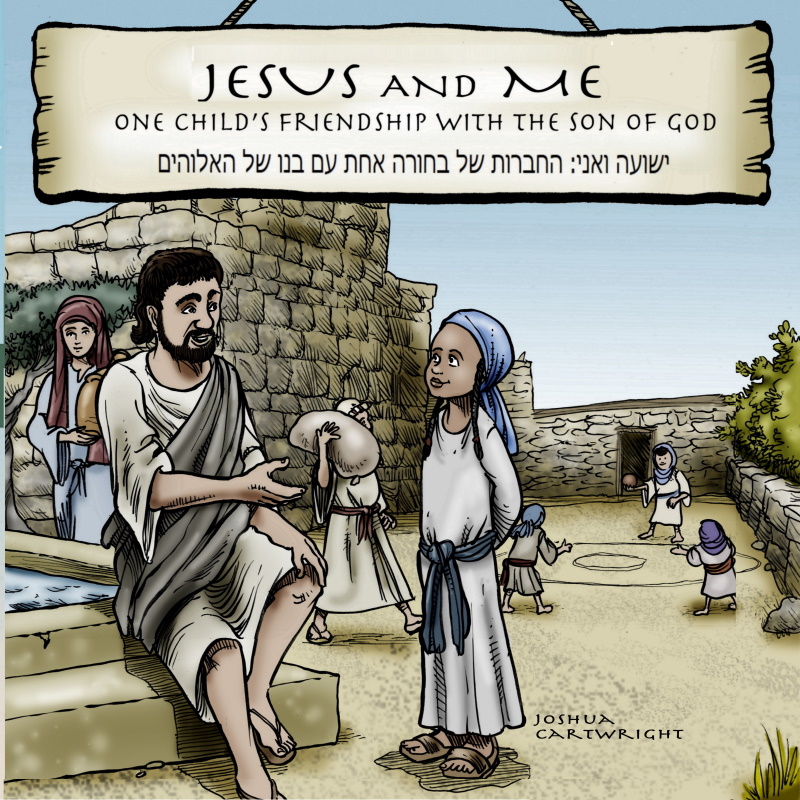 As a Christian parent, how do you help your child mature in faith when he or she has doubts? What materials and resources are there alongside the Bible? And, are they enough?

These were the questions on my heart a few years ago when my daughter Seraphina was eight. She still accepted most of what I said about the Bible but, having two older children, I knew the time would come when I’d have to step up my game in guiding her.

I couldn’t find much Christian material for her age-group. As Christians, of course, we go to the Bible first but most avid readers of her age loveJesus and Me stories too. Hmmm.

Stories have a way of teaching us without it looking like teaching. If a story inspires us it can change us. I once accidentally wrote that ‘stories live us’ but that seems quite accurate.

I’d tell Seraphina a Bible story most nights and she’d ask me to be included in the story. So, for fun, I’d put her in the crowd that followed Jesus. But before long, it occurred to me that perhaps a child’s-eye-view of Jesus could be useful in and of itself.

I knew that many Jews in First Century Israel were waiting for a King in the line of David (the boy who killed Goliath) to rescue them – probably by force – and restore Israel to ruling greatness.

So… a child who believed that would have a hard time accepting the peaceful Jesus as the Messiah… especially when He wouldn’t use his power for violence.

I put on my author hat – and so was born the idea for Jesus and Me: One Child’s Friendship with the Son of God. What if a little girl met Jesus, and he wouldn’t behave the way she expected.

The idea wouldn’t leave me alone but – I was apprehensive about writing it. I knew some of the interactions the girl – now named IMMA – would have with Jesus would be fictional and I would have to make up some dialogue for Him.

Christians are very much on the alert for false doctrine and so I worried that the words I wrote could be confused with that. The hit series The Chosen about the life of Jesus hadn’t appeared yet, and I hadn’t come across many fictional accounts of Jesus that had dialogue not taken directly from Scripture.

But then – and I know some people will take issue with this – the Holy Spirit told me ‘I will tell you what to write.’

So I said ‘okay’ and settled down to write. Although there was a lot of research about life in 1st Century Judea the stories just flowed out of me:

Imma, eight, interrupting Jesus with questions as he tells the Parable of the Good Samaritan; Imma watching Jesus walk away from the crowd trying to make Him King; Jesus clearing the Temple with Imma cheering Him on, and more.

But how to ensure readers knew what were the actual words of Jesus? I remembered some Bibles had His Words in another colour! That was the solution.

I also wanted the book to have an enriching educational element: I feel very strongly that we underestimate a child’s ability to look things up if they are curious.

So I had the characters use a few Hebrew words such as ‘Shalom’  for ‘hello’; ‘Yahweh’, ‘Elohim’, ‘Hashem’ and ‘Adonai’ as names and titles for God – and Beth-Lehem – which means the House of Bread and the House of Fighters. I explained these are the start and included fun facts and maps.

So what was the result?

At first, not much!

I paid for an expensive press release that didn’t work, and purchases were few. For us authors, this is hard. We’ve labored – literally – input time and energy and money into writing something we believe will entertain and maybe inspire.

However, I persevered and found people who’d review the book and the positive responses started flowing in. People were saying that they’d buy the book for their grandchildren, that it had made them read their Bible again, that they wished more Bible stories were written like this.

I’d tried very hard to create a child who was passionate about her faith but also just a child –  outspoken and not always very wise in what she said. I hoped that children would learn that it’s possible to doubt and say dumb things – and still want to seek answers about God.

The big surprise was how much the book is impacting adults as well. The reviews increased, sixty, seventy, eighty!

A local headmaster  bought multiple copies for his school’s Religious Education curriculum, and people started suggesting it would make a great cartoon series. So, I took a deep breath – created a trailer and reached out to an American TV network: they loved the idea – and said they’d like me to pitch them a treatment!

In a way, this was madness. I had no experience doing this.  But I’d been mad enough to trust I could write a book that would impact children so I reached out again to the Christian writing community and found an agent who was keen on the project. As of writing, I’ve extended the book into six twenty-five-minute episodes and I’m pitching it to a producer later in August.

I think the point to be made is that when you are writing with a purpose you don’t know how far you can go.

However, writing a book is only half the work. You have to knock on a lot of doors and go outside of your comfort zone. You also need to be sure that you can be happy with what you made if no one loves your work. If you can do that, you can keep writing because the joy of self-expression is its own reward.

I wrote multiple books before this one – many struggled to get much interest partly because I was still learning my craft. As I discovered, overnight success comes after many other nights when you didn’t succeed!

But I found my niche with writing children’s books that entertained and taught at the same time. My wife and I wrote The Granny JJ Adventures: Guyana’s Daily Detective about an old Creole speaking lady who investigated village mysteries.

Obscure? Yes. But the Government of Guyana loved it, the President of Guyana read it, and the education ministry bought hundreds for use in schools as a language text.