Dreams That Are Done By Dee Morrison Meaney 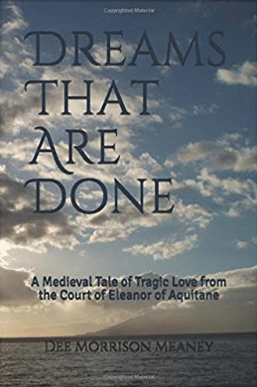 In the early 1980’s, my life was filled with children, 5 of them and their friends. It was a time when I spent a lot of time in the laundry room, the kitchen and the car, ferrying children to one game or another.  It was also a time when I was thinking about the place of women and the early existence of a Mother Goddess. It was a very popular subject at that time.

In the midst of child care, I began the story of Branwen, which is told in the trilogy which starts with An Unkindness of Ravens. Branwen was the last priestess of the Mother Goddess who had been pushed out of Europe to the very edges of civilization, to Ireland and to the mountains of Wales on the west coast of England.

Writing of that time, I spent many happy hours researching the history of England in last years before the Norman conquest. Branwen began to play into that history, surrounded by actual historical characters. I have always felt that British England was lost at Hastings in 1066, overwhelmed by the Mediterranean culture of the Normans.

The British world that faced north, politically involved with the Vikings, was a fabulous alternative world for me and I loved every minute I could find to spend hunched over a typewriter.

After the first two Branwen books were published, I was asked by my agent to write the story of Tristan and Iseult, a fabulous tale which can be traced to the court of Eleanor of Aquitaine. I very much enjoyed writing this and it was subsequently published as Iseult. When I issued a second addition, I changed the title to Dreams That Are Done. The story remained only very slightly altered.

The three Branwen books and Dreams That Are Done all explore the edge between reality and fantasy, an edge I love. I believe it is the same edge that readers of Tolkien love.

Some years later, I was asked by an agent in Boston to write a new book and I found a traditional Irish tale of Diarmuid and Gráinne. It intrigued me and my husband and I went to Ireland where we traced the route of Diarmuid and Gráinne as they fled the wrath Gráinne’s father, the high king of Ireland, and of Fionn MacCumhail, the legendary Irish hero.  I stayed true to the legend only trying to flesh out the characters and their motivations to make the story and the actions of each character make sense.

An Unkindness of Ravens, subtitled Maiden

A Deceit of Lapwings, subtitled Mother

An Exaltation of Larks, subtitled Crone

The trilogy tells the history of Britain from 1010 to 1066, told through the life of Branwen, last priestess of the Earth Goddess

Dreams That Are Done

The story of Tristan and Iseult. “Tristan journeyed to the sorcery-ridden land of Ireland to kill a dragon and win Mark a bride. Tristan loved his king. But he loved his king’s wife more …”

Daughter of the High King

This love story is a small fragment from the ancient Irish legends of the hero, Fionn MacCumhail.