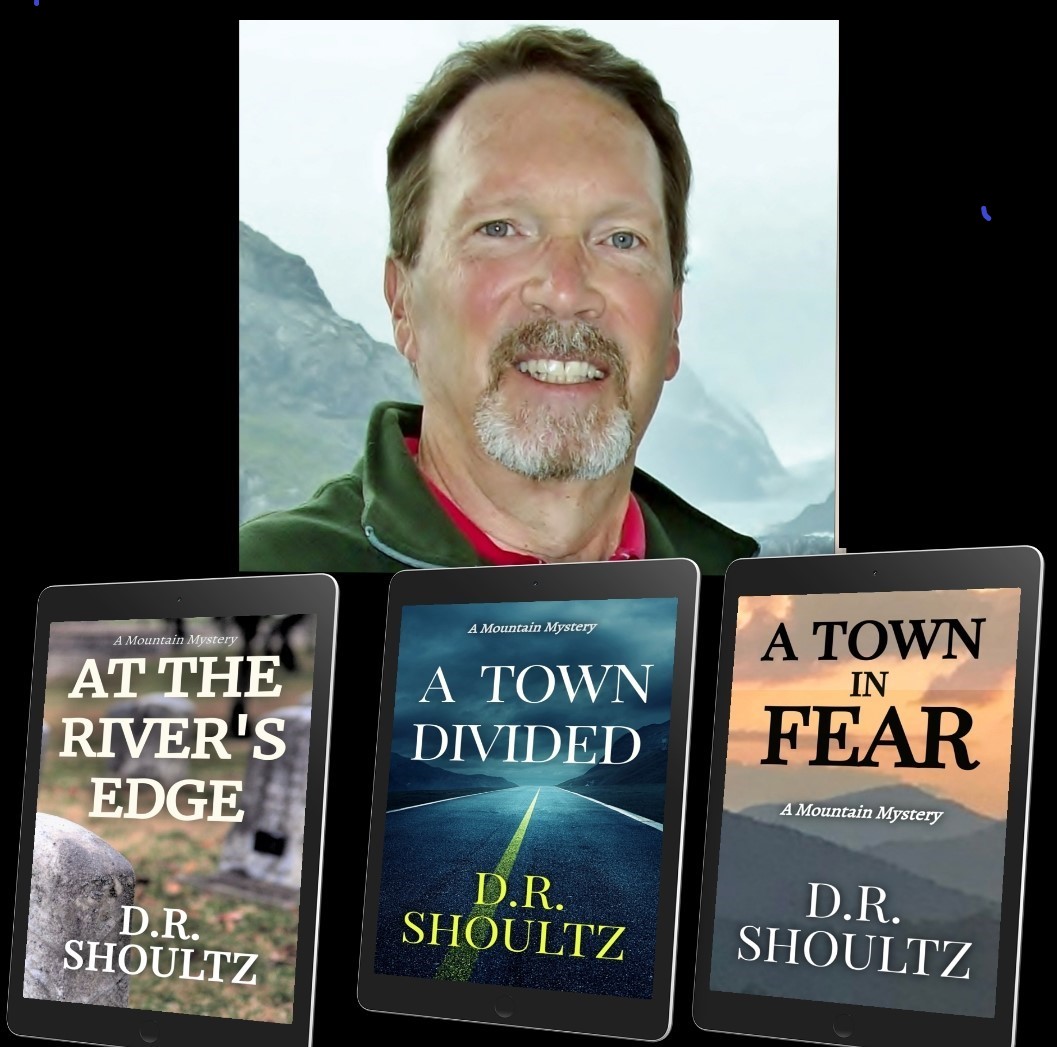 A dog lover, tinkerer and self-published author, D.R. (Donn) Shoultz’s roots are in the Midwest, but he has called North Carolina home the past 25 years.  He writes at a mountain retreat off the Blue Ridge Parkway where his wife Claudia shares her considerable editing experience shaping his novels. In their free time, they enjoy traveling and hiking nearby wooded trails with Milo, their black lab-mix.

Donn began writing fiction following a sales and marketing career that took him across the world. “My writing started as an escape, a way to fill a huge void in my life,” Donn explains. “In my early fifties I was retired, recently widowed, and living with my dog in the mountain home my late wife and I planned to occupy for years to come.

“My initial efforts at writing filled my time but produced three sub-par novels. One was never published, and I’ve since removed the other two titles from Amazon,” Donn continues. “Unfortunately, old reviews and used copies are still floating around the internet.”

Donn admits after meeting Claudia, his writing improved considerably.  A paralegal and retired editor with a journalism degree, Claudia became Donn’s toughest and best critic. They married two years later, and Claudia has since edited eight of Donn’s novels and two of his short story collections.

“It takes a while to find a genre that fits a writer,” Donn explains. His current focus is his Mountain Mystery Series. He defines the series as cozy mysteries with a bite. These fast-paced murder mysteries are set in North Carolina with the Blue Ridge Mountains as a backdrop. In each story, crime invades formerly peaceful mountain communities. Hometown heroes emerge to work alongside law enforcement, or at times, in competition with police, seeking clues to unsolved murders.

“At the River’s Edge, the first in the Mountain Mystery Series, was my first novel to sell thousands of copies,” Donn boasts. “I’m far from being a best-selling novelist, but the response to this novel was very encouraging, and has since generated a loyal base of readers.”

In Donn’s latest work, A Town in Fear, attorney Luke Maxwell returns from A Town Divided to once again defend the wrongly accused.  The square-jawed, steely-eyed, 40-year-old walks the line between lawyer and private investigator as he seeks clues to the murder of a man found buried in a safe behind Jill Stevenson’s roadside café. The safe is unearthed yards from Jill’s diner during the construction of a controversial highway expansion.  Luke struggles to defend a woman he knows is innocent even as evidence to Jill’s guilt mounts. The conclusion is rapid, tense, and one you’ll not see coming.

All of Donn’s mysteries stand on their own, although characters from the early novels will occasionally reappear, making them a series within a series.  Luke Maxwell was the first to make a second appearance.  Watch for Jack Fowler from Butcher Road to once again be featured in a coming mountain mystery.

You can learn more about D.R. Shoultz and his Mountain Mystery Series at DRShoultz.com.