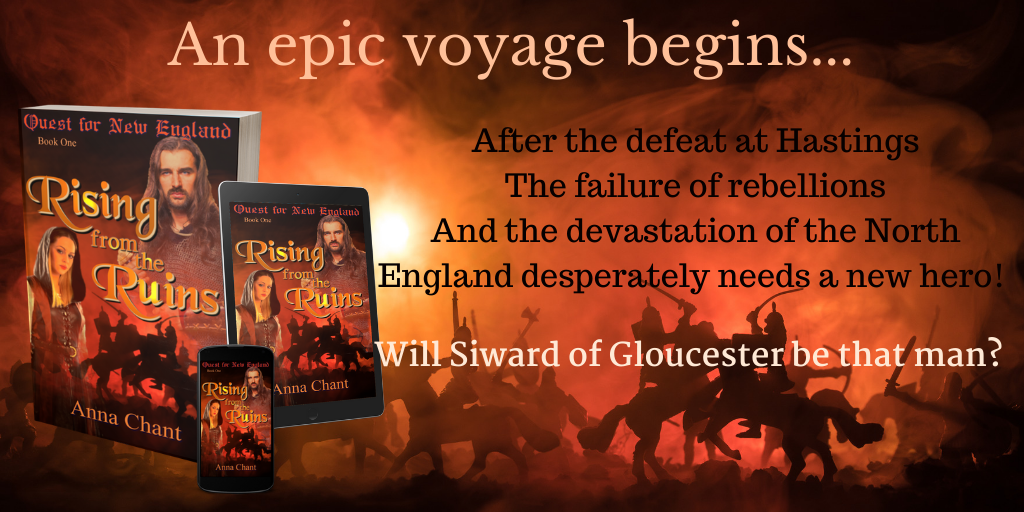 Thank you to the Author’s Lounge for hosting me on their blog today. My name is Anna Chant and I’m a historical fiction author from Torquay in South Devon. After studying history at the University of Sheffield, I remain fascinated by the past and in particular the early medieval period, an intriguing era where legend can feature as frequently as fact and with much that remains a mystery. I have written ten books to date, often based on the lesser-known people and events of that time. Rising from the Ruins, the first in the Quest for New England trilogy, is inspired by one of those events.

1066 is probably the most famous date in English history and we all know what happened. Duke William of Normandy successfully invaded England, winning a decisive battle at Hastings and bringing an end to the Anglo-Saxon period. It is often said that history is written by the winners and the Norman Conquest is a good example of that, with little thought given to the Anglo-Saxons after that date.

Rising from the Ruins is based on what is probably a true story about an Anglo-Saxon nobleman named Siward who refused to submit to the Norman regime. It is unclear exactly who he was. In the records he is named as the Earl of Gloucester, but he cannot have been as this title did not exist until Norman times. This is just one of the inconsistencies in the story which may puzzle historians, but leave the historical novelist free to weave their own tale based on the scant historical records.

The story starts in the 1070s with the Anglo-Saxon characters struggling to come to terms with everything they have lost. Siward had fought at Hastings as a seventeen-year-old and remains traumatised by his memories of the battle. Today he might be diagnosed with PTSD, but in the eleventh century he is left to struggle with nightmares and flashbacks. The nightmare that most torments him is a mistake he made in the battle, when another man sacrificed his life to save Siward’s.

Oswyth, the main female character, is the daughter of that man. Orphaned as a ten-year-old in 1066, she has been raised by her grieving grandfather. Like most orphaned Anglo-Saxon heiresses, her likely fate is to be married to one of the Normans. But her grandfather has other ideas. Determined to keep his only surviving kin out of the hands of the invaders, he begs Siward to marry his granddaughter. This not only angers the Norman who intended to marry her, but also infuriates Oswyth who hates Siward, blaming him for the death of her beloved father.

Rising from the Ruins is a story of what a conquered people have lost. As well as Siward traumatised by his experience and Oswyth continuing to mourn her father, there is the character whose older brother died at Hastings and fears he can never live up to his memory; Siward’s friend who was injured at the Battle of Stamford Bridge a few weeks before Hastings and struggles with the guilt at not fighting there; the bishop driven from office to make way for a new Norman bishop; and a man whose entire family were killed in a brutal Norman campaign known as the Harrying of the North.

At the start of the book, the Anglo-Saxons still hope they can end the Norman domination. Rival claimants to the throne Edgar Atheling and King Sweyn of Denmark may yet prove to be their salvation. But I am sure it is not exactly a spoiler to say these rebellions will not be successful! Refusing to submit to the Norman king and with all hope gone of ousting him, Siward chooses exile, planning to lead a vast fleet of ships filled with his countrymen away from the land they can no longer call their own.

The Quest for New England trilogy follows this group of Anglo-Saxons through their struggles as they search for a place to call home. Although it is a tale of loss, it is also one of adventure, intrigue and piracy with a fair dash of romance. But most of all it is a tale of friendship and a determination to succeed against the odds as the saga continues in Peril & Plunder before concluding in Courage of the Conquered. While the trilogy is complete, there is the possibility of a follow-up story, as well as some of the minor characters who may have their own tales to tell, so perhaps I shall revisit this event and characters in the future. Info on current and future books can be found on my Facebook page Dark Age Voices.

The trilogy is aimed at readers who love medieval history, historical fiction, romance and sagas, who would like to learn more about forgotten English hero Siward of Gloucester. We may never know exactly who he was, but in reading this you can find out who he might have been and the many, very real struggles he and his countrymen must have faced.