Book of the Week | Tobacco, Trusts, and Trump by Jim Rumford 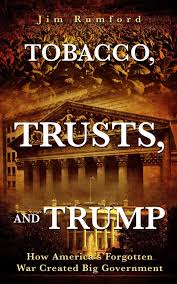 Tobacco, Trusts, and Trump: How America’s Forgotten War Created Big Government is a memoir by the award-winning author Jim Rumford. However, the book is no ordinary accounting of the author’s own history. In fact, Tobacco, Trusts, and Trump is a detailed narrative that features one of American history’s most interesting topics- the Black Patch Tobacco Wars. Jim Rumford takes his readers to various states of the U.S. during the last decade of the 20th century when violence broke out between tobacco companies and farmers, mainly organized ones forming the vigilante group known as the Night Riders.

Set between 1904 and 1909, the violent years of the Tobacco crisis, Rumford’s book narrates how a lawless militia of 10,000 masked men roamed the cities and the countryside of the United States burning tobacco farms and crops.

This group of armed men was known as the “Night Riders” and most of them are disgruntled, farmers and farmworkers Their violent vigilante acts include setting fire to warehouses and barns, displacing men from their homes to torture them and other forms of harassment. These series of incidents and murders affected hundreds of families and millions worth of profit. To say that this changed the political and economic landscape of the areas affected is a gross understatement. That is why Jim Rumford’s book Tobacco, Trusts, and Trump is relevant no more than ever. Ji, Rumford feels that the conflicts that the forefathers encountered many years ago are present in America’s economic and political atmosphere.

Jim Rumford is an entrepreneur, an avid historian, an award-winning author, and the CEO of Rumford Industrial Group. His birthplace is in Louisville, Kentucky. He spent his early years in Bracken County, Kentucky, and Cincinnati, Ohio. Rumford’s family has a rich history with the tobacco industry and with the Tobacco Wars. His own Great Grandfather was George Washington Kiney suffered violence in the hands of the Night Riders, destroying their family barn as well as the tobacco crops. On the other hand, Jim’s other Great-Grandfather, George Washington Jett was a Night Rider and actively participated in the violent raids during those times. It was this dilemma that prompted Jim to write this book. Using perhaps the largest and most comprehensive private collection of documents on the Tobacco Wars, Jim Rumford draws startling parallels between America’s present political and economic challenges and the crisis that cause one of the darkest, most turbulent times in American history. Jim Rumford’s Tobacco, Trusts, and Trump: How America’s Forgotten War Created Big Government is a book that every student of American history should read and understand. Indeed, this is a masterpiece worth reading. Jim Rumford is currently promoting his book and asserts its significance to present American society. Rumford now resides in Dayton, Ohio.

ReadersMagnet is proud to feature Tobacco, Trusts, and Trump as the Authors’ Lounge Book of the Week.

ReadersMagnet.club features one book every week as its Book of the Week. ReadersMagnet is a self-publishing company that offers publishing and book marketing services. Contact ReadersMagnet Self-Publishing at their office number: (619) 354 2643 Toll Free Number: (800) 805 0762 Fax Number: (661) 338 1442 or email them at [email protected] for more details.