Book of the Week | Colonizing Trappist by Chris Shockowitz 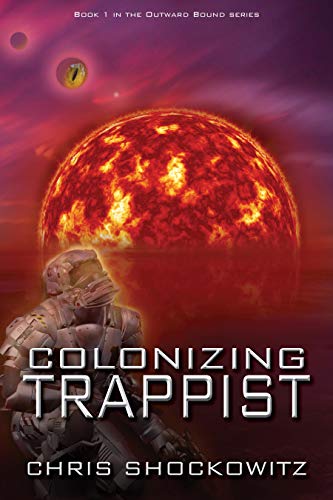 Eugene Hamilton, commander of an Earth mission to colonize the Trappist system, wakes after eighty years asleep aboard scout ship Exo-1. Once awake, Hamilton and his crew must choose which of the Trappist planets is best suited for human settlement, and they only have four months to make the decision before the ship Atlantis will arrive with five thousand colonists.
Choosing the right location is no easy task. Numerous factors need to be considered, but what the humans did not expect was to discover traces of a vanished civilization. Not only do they find ruins of the Marzon aliens, but they discover these people were exterminated by another alien race. This race has left behind robots to defend the planet

While Exo-1’s crew believes it can secure the planet against these robotic defenders, it’s less certain it can defend itself if the robot’s creators return and plan to colonize.
For a while, all seems to go well as the colony begins operations. But then an alien ship approaches. Will these aliens are willing to make peace and compromise in sharing the planets, or will they seek to exterminate the humans, just like they did to the Marzon?

Chris Shockowitz is discovered his love for science fiction at an early age after reading the Lensman series by space opera legend Edward Elmer Smith (E.E. “Doc” Smith). He attended college at San Jose State University where he earned his business degree. He spent the next 25 years at Intel as a software developer and retired as a Director of Application Development. It was his love for sci-fi and his experiences that inspired him to write Silent Invasion, the first book of his The Zalthurias Series. The Colonizing Trappist is part of another book series, The Outward Bound.

You can check Chris Shockowitz at his website https://ShockowitzSciFi.com or interact with him and other authors at https://www.goodreads.com/topic/show/20181538-readersmagnet-review.