Book Feature: Apostasy Can Lead a Nation to Self-Destruct by Philip Wittig 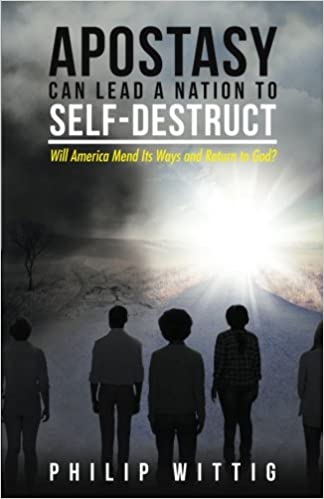 Philip Wittig’s Apostasy Can Lead a Nation to Self-Destruct is a relevant read about the faith and fate of two nations.

They say that all nations trace their roots to the great prophet Abraham. All three major religions consider Abraham as their first prophet. Through Abraham, we learn of God’s covenant with the people. God chose Abraham’s people and promised to be with them and guide them to a promised land and to bless them. God delivered them from famine and led them to Egypt. The 12 sons of Abraham would become the 12 tribes of Israel which would later be enslaved by a new pharaoh. God then gave them freedom and delivered them from the bondage of slavery. The tribes of Israel would rise to become a great nation producing great leaders and kings. But under the reign of King Solomon, God’s covenant with His people would end. King Solomon turned away from God and began worshipping idols. This so-called apostasy angered God and He left Israel to be divided and conquered by other nations. For author Philip Wittig, the fate of Israel could happen to America, unless its people return to God.

The Faith and Fate of Two Nations

In 2017, Philip Wittig published the book Apostasy Can Lead a Nation to Self-Destruct: Will America Mend Its Ways and Return to God? It is a religious book that investigates and aims to show readers the history and fate of a great ancient nation and how America is heading to the same path to self-destruction. Wittig discussed the origins, rise, and fall of the ancient nation of Israel, their relationship with God, and the apostasy that led to their defeat and the eventual destruction of their people. Philip Wittig’s extensive knowledge of the bible and the history of nations led him to compare ancient Israel with the present-day United States of America. Currently, America is embracing a path away from God as evidenced by its policies both here and abroad, its values, and its stand on moral and social issues.

After Israel rose to become a great nation, they seem to have forgotten about God. They placed their faith to the wisdom of kings, wisdom that God himself provided. Soon they became arrogant and forgot their covenant with God. For Wittig, this sort of national amnesia that ancient Israel suffered is happening today in America, and God is trying to warn the American people. For the most part of the twentieth century, the superpower nation has engaged in numerous wars of aggression, passed laws that are in contrast to God’s spiritual teachings, and the nation is fast losing its moral fiber. Aside from wars and dirty politics, America is presently haunted by social ills including drug trafficking, sexual scandals, and abortion, The shameful loss in Vietnam War and the September 11 attacks could be a reminder that God is slowly abandoning America to its impending doom.

Currently, the United States of America is ignoring these signs. Under the current administration, America continues its obsession with national security, its idea of policing the world, and embracing a less moral and humane under the guise of democracy and liberal thinking.

America is suffering from “historical amnesia”, forgetting how with the aid of God and its righteous leaders became a great nation. This current apostasy or abandonment of the belief in God may one day result in America’s destruction. Today, America is among the nations greatly affected by the pandemic. This could be an opportune time for the nation to reflect on their sins and return to God’s good graces. Philip Wittig hopes that his book will inspire people to also respond to social issues that are pushing America away from God.

About the Philip Wittig

Philip Wittig is a Lutheran and an active member of the Sheridan Lutheran Church in Lincoln, Nebraska since 1968. Wittig has been facilitating a men’s Bible study for the past 13 years and also served in various capabilities. He has committed to reading the Bible daily. In his study of the Old Testament, Philip Wittig recognized events that led to God rendering his righteous judgment against the ancient nation of Israel. Since its publication, Apostasy Can Lead A nation to Self-Destruct has been calling the American people and the nation’s leaders to repent and abandon their ungodly ways. Wittig is firm in his belief that God will only protect a nation if they keep faith with Him.