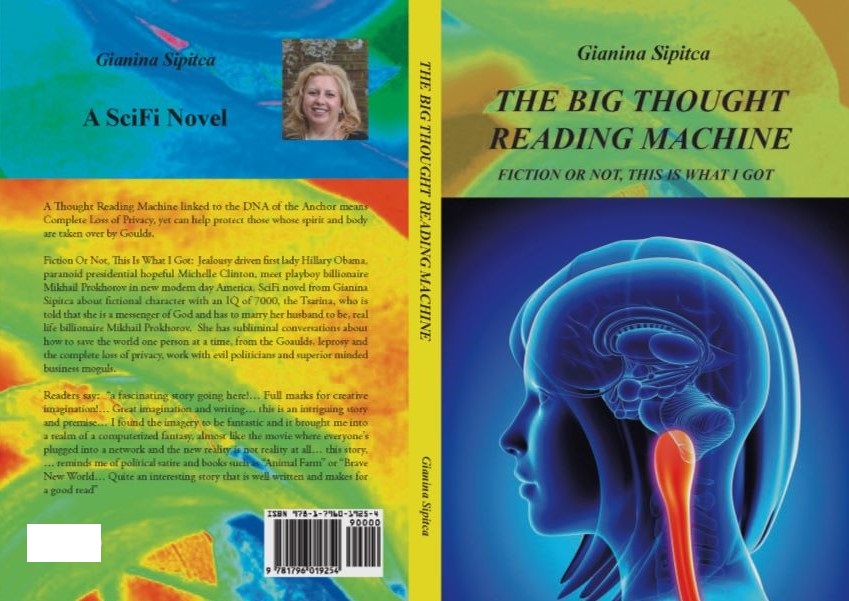 For centuries, trained people could read each other’s minds, influence each other’s decisions, give each other feelings of love, hatred or envy. It was only for “superior individuals” though to “participate” in “the game”. The “Stupids” were to be prayed upon, their individual intelligence tapped into by the initiated. Now, in the 21st Century, the Big Thought Reading Machine invention allowed “stupids” to defend themselves from the superiors, and at the same time pray on each other. The machine, together with the system, can give you an orgasm, make you vote republican, ask you subliminal questions, tap into your creative intelligence and when you are inconvenient in any way, it can easily, untraceably kill you.

The Electorate  Is mind control really a thing? Can something like this be happening? Of course it can, but of course it should not, Mean that it happens a lot.   He wants my 10 dollars, But not my 2 cents, I’ll give him the later, Without pretense. Dulkinna, the “lab rat” used by the machine to collectively use her nervous system, was dabbed “the cow”. She was a cash cow for the system and the corporations. But most of all, her owner, the father of the games. A superior individual, Dulkinna had never been trained at subliminal level, out of fears she would easily become better than any other superior.

This enhanced her creativity and value in the business world. Rather than tap into other people intelligence, Dulkinna was always using her own resources during her favorite pass time, problem solving.   She was passionate about a number of subjects: from politics to science, literature, social sciences and cooking. But most of all, they loved using her kid like charm so that the libido enhancing capabilities of the machine could be marketed. The machine glitch made it such that every woman envied, hated and wanted to be her, and every man mistakenly thought he was in love with the cow.

The women started the “Conference for the women” where they discussed how to kill the cow. The stupid hatred and envy became so big that the first lady herself came with a plan for destroying “that beach”. She learned everything about the human metabolism under the pretext of the child obesity. She now knew how to make Dulkinna artificially gain weight while eating strawberries. If she had a little bit of soup with some fat in it, the first lady and her system of “queens of Sheeba” could make Dulkinna gain a couple of pounds within the hour. Many could not imagine that their thoughts were open to others to see.

Continuously they were flabbergasted by their fears, into playing the game and pretending that only Dulkinna’s nervous system can be used by the machine, and that, led Dulkinna into reaching the conclusion that continuous war and insanity would follow. They were so busy amusing themselves with making her gain weight or altering her appearance, or with giving themselves multiple orgasms with the machine that used her nervous system, that she was unsuccessful in bringing their attention to the dangers that the machine was posing for their own lives and livelihood even. She was considered so superior that society decided to harvest her eggs and they had approximately 250 living children of Dulkinna, born by surrogates who wanted either to have a superior child in the family, or to raise one of them for body parts.

The children born from her DNA were always the most devoted individuals, who gave their lives gladly for their parents or for a just and righteous cause. Just like Dulkinna’s brother had done years before.   He was a trained superior, who had allowed himself to be killed in a ritualistic fashion, in order to prevent the murder of his untrained elder sister or that of her husband. The governments who “owned” the game, wanted to bring a tragedy into her life, to see how would she develop socially. They called it building “the cow’s” character. He had been the most warm, loving and caring individual that Dulkinna has ever known. Since he was baby, in his mother’s arms, he used to follow and pay close attention to his big sister, and signal how much he would love her. There was no sibling rivalry? Yes, it was, but the brotherly love between them surmounted all obstacles.

It was as if God All Mighty took the time to be with Him on this Earth, to guide His every move and deed, to calm and warm His Heart and Thought. The fire in His turquoise Eyes would be the Force that will guide Dulkinna throughout the rest of her life, to show her what was good and where there was evil. He came to know that, during His short time of parting His wisdom to her, and took care to great length that Dulkinna remembers both at over-liminal and at subliminal level that force. That had become her guiding Light, her Shining Morning Star. 23 years after his murder, Dulkinna wrote a poem about Him and the Big Thought Reading Machine and the game: If I Could….