BB King: Song Writer and King of the Blues 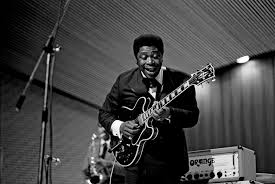 Today marks B.B. King’s 94th birthday anniversary. With a musical career that spanned over 7 decades and widely considered as the true King of the Blues.

Riley B. King was a legendary singer, guitarist, songwriter, and one of the “Three Kings of the Blues Guitar. His influence on modern music is still evident among famous guitar acts and rock n roll bands such as Jimi Hendrix, Lenny Kravitz, Oasis, U2, and many other musicians.

The young B.B. King began his musical career playing for gospel singers around Mississippi area. He also played on the Memphis radio station WDIA gaining audience and engagements. He also worked as a radion musician and a disc jockey.

His path to blues started with a band names The Beale Streeters. This was the start of B.B. King’s recording career. While his early recordings did not gain much recognition, it caught the attention of a few recording companies that would later be a huge part of his rise to stardom.

Later, B.B. King started his own band, the B.B. King Review along with Calvin Owens, Kenneth Sands, Lawrence Burdin, George Coleman, Floyd Newmann, Millard Lee, George Joyner, Earl Forest, and Ted Curry. This was the start of successful recording contracts and tours across the United States. It was around this time that B.B. King produced the hits “You Know I Love You”, “Woke Up This Morning”, “Please Love Me”, “When My Heart Beats like a Hammer”, “Whole Lotta Love”, “You Upset Me Baby”, “Every Day I Have the Blues”, “Sneakin’ Around”, “Ten Long Years”, “Bad Luck”, “Sweet Little Angel”, “On My Word of Honor”, and “Please Accept My Love”. This string of hits landed them a record deal with ABC-Paramount Records in 1962.

Hall of Fame and Legacy

By 1980s, B.B. King has already established himself as a superstar guitarist, blues royalty, and a great hitmaker. He was inducted into the Blues Hall of Fame in 1980. Seven years later, he received the Rock and Roll Hall of Fame citation. In 2004, the international Polar Music Prize was awarded to B.B. King “in recognition of exceptional achievements in the creation and advancement of music.”

During this point up until his death in 2015, B.B. King actively collaborated with young artists such as Eric Clapton, Dr. John, Koko Taylor, and the Irish band U2. He also did numerous TV shows and performances, averaging 300 shows a year.

Between 2006 and 2014, King toured around the world, performing in great concert halls and festivals.

His last performance was at the House of Blues in Chicago on October 3, 2014.

B.B. King died in his sleep on May 14, 2015. He was 89 years old. He was buried at the B.B. King Museum in his hometown in Indianola, Mississippi, United States.

Aside from his music, King is revered by many for his energy, performing hundreds of shows every year.