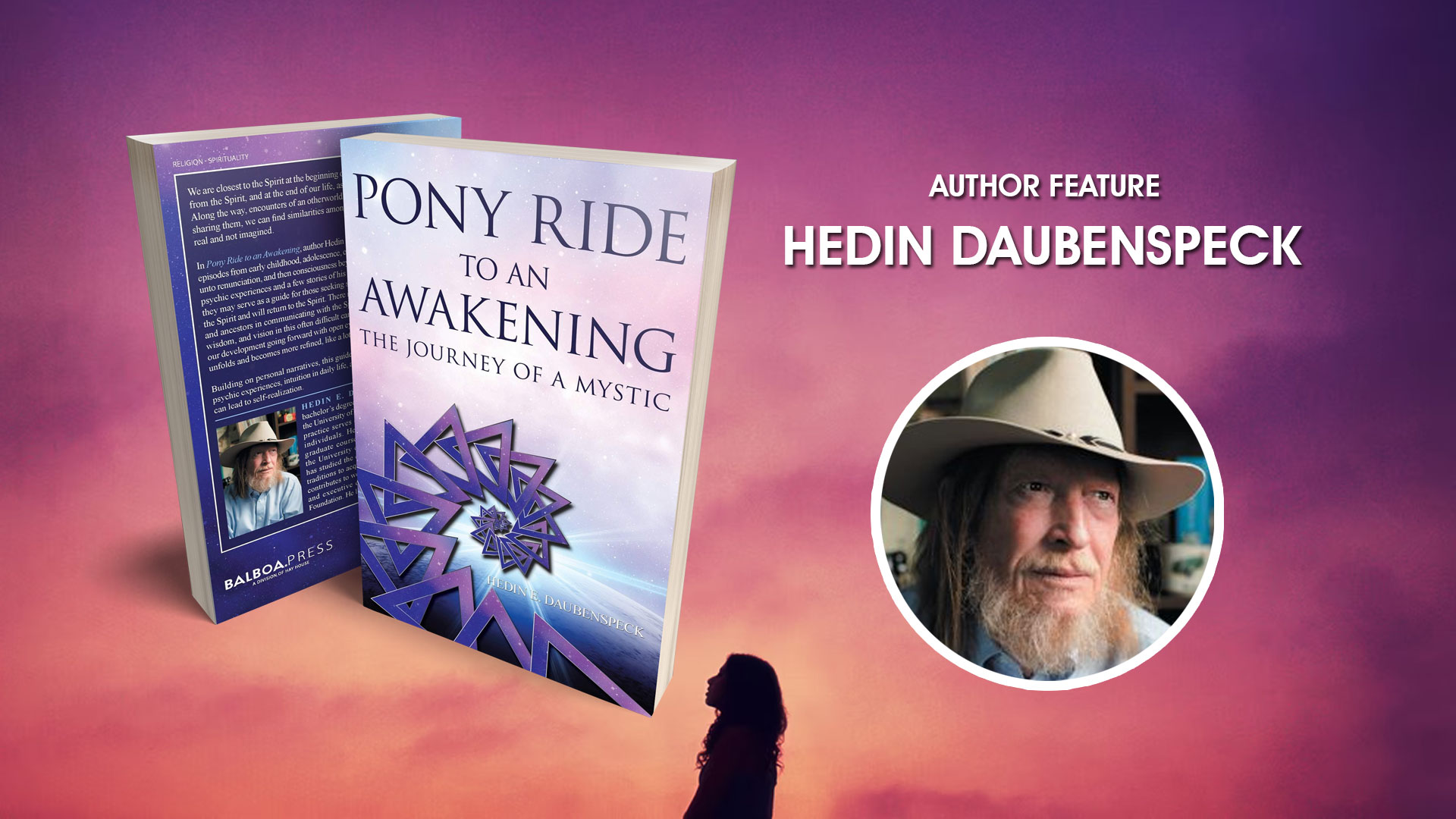 Hedin Daubenspeck is the author of the unique spiritual guidebook Pony Ride to an Awakening: Journey of a Mystic.

Today, we will feature an author who has spent a lot of time studying philosophy, consciousness, religion, and spirituality. Author Hedin Daubenspeck spent forty years of study and now shares his journey and wisdom in his latest book, Pony Ride to Awakening: Journey of a Mystic. Let us get to know more about him.

Hedin Daubenspeck spent his childhood on a farm in southwestern Oklahoma. Growing up, Hedin witnessed his parents’ spirituality, which would play a significant role in his study and journey towards spiritual awareness. Hedin earned a bachelor’s degree in business administration (B.B.A.) from the University of Oklahoma. His interest in philosophy and religion led him to complete several graduate courses in consciousness studies at the University of Philosophical Research before discontinued the master’s degree program.

Daubenspeck is a certified public accountant (CPA) operating a public accounting practice in Tulsa, Oklahoma. His clients are entrepreneurial businesses and individuals. He is also one of the co-founders of Forest Essence Foundation, an educational 501 c3 charitable foundation created to advance the knowledge of our everyday living environmental consequences. One of the primary goals of the said organization is to distribute “Forest Savvy,” an educational teaching aid, to middle school science teachers. It is a tool that will assist educators in facilitating the teaching of the environment segment of the science course.

Hedin Daubenspeck contributes his expertise to Forest Essence Foundation’s financing, formation, development, and other programs. Aside from being a co-founder, Hedinalso serves as the executive director of Forrest Essence. His background and experience living on a farm and later working in a plywood manufacturing company spurred Hedin’s interest in wood veneer and preserving the earth’s forests.

Another primary interest of Hedin’s is philosophy. As a young man, he began studying philosophers, various religions, and schools of thought. Hedin’s pursuits and studies have led him to many spiritual awakenings and encounters for more than four decades. As a mystic, Hedin also studied the esoteric mysteries of the Egyptians, Greeks, Persians, Hebrews, Hindus, Buddhists, Daoists, Christians, and Native Americans to further enrich his knowledge and wisdom. For Hedin, we live in exciting times, and he feels motivated to share his knowledge with others to embark on a spiritual journey of their own.

“After 40 years of study in the library and developing personal and spiritual awareness, I thought, ‘Let me write a book to explain the process because not everybody has 40 years to spend in the library.’”

In February 2020, Hedin E. Daubenspeck published his masterpiece entitled Pony Ride to an Awakening: The Journey of a Mystic. The 140-page spiritual guidebook contains forty years of research, experiences, lessons, and Hedin’s spiritual journey stories. Daubenspeck shares his spiritual experiences across decades to encourage readers to embark on their spiritual journey. Hedin also attempts to describe a number of spiritual experiences we’ve had during our early childhood, adolescence, early adulthood, even during our maturity years, and spiritual encounters by some during their retirement years unto renunciation and even consciousness beyond death.

“We are closest to the Spirit at the beginning of our life, just entering incarnation from the Spirit, and at the end of our life, as we prepare to return to the Spirit. Sharing some of my psychic experiences and a few stories of my friends and family may serve as a guide for you in finding some similarities in these with your own experiences to reinforce the trust in these experiences as real and not imagined. “- Hedin E. Daubenspeck

You can purchase a copy of Hedin Daubenspeck’s Pony Ride to an Awakening: The Journey of a Mystic book on Amazon. You can also visit his author’s website for more updates, details, and other information.