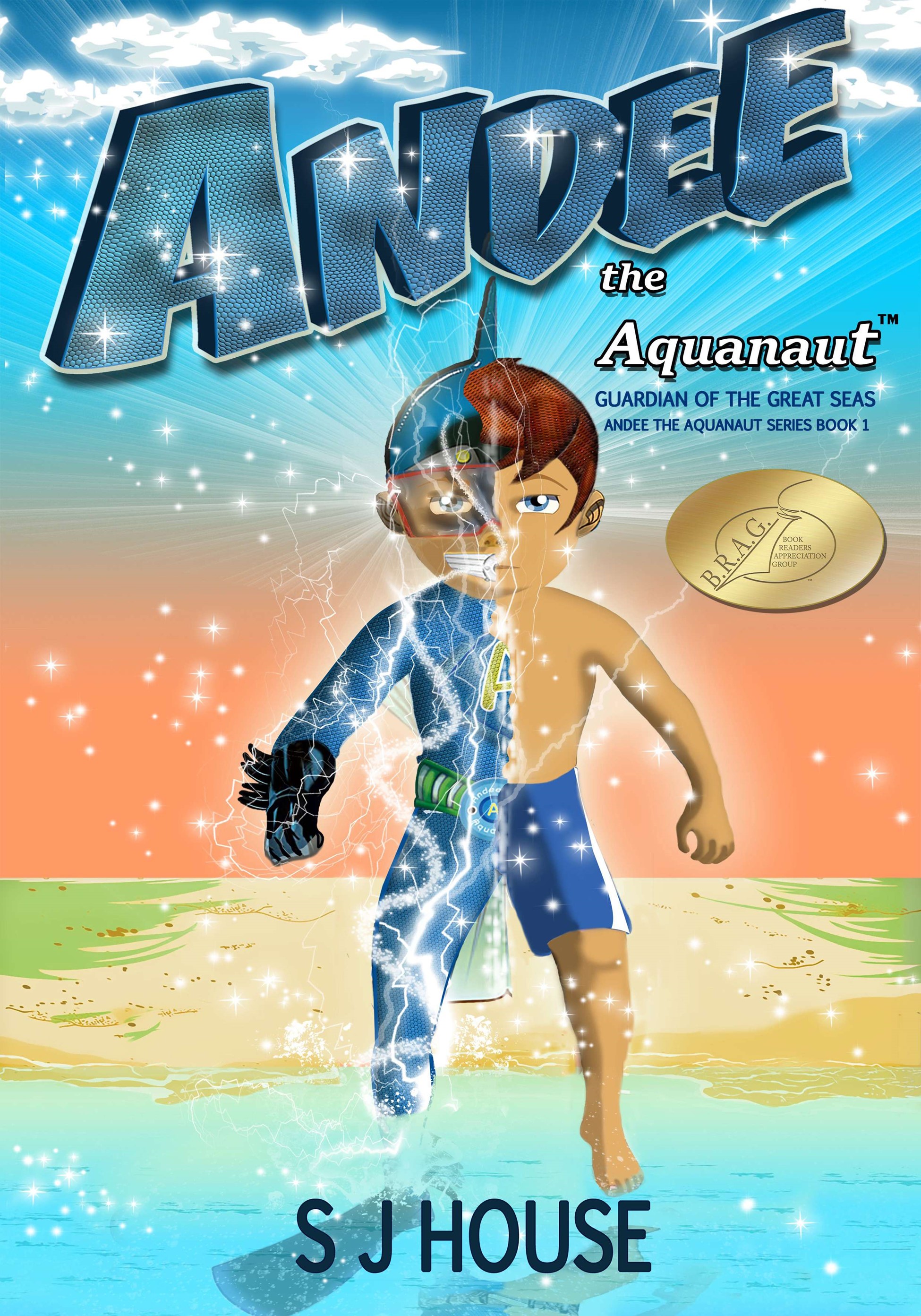 What is my book about?

This is a story of high adventure under the low seas, as one extraordinary boy finds his destiny. The forces of evil are gathering to take control of the ocean’s underworld. Only one boy and his unique marine friends can stop them.  Andee the Aquanaut becomes the greatest eco-warrior of all time.

Andee is a  curious and spirited boy living on an island. His parents, marine biologists, search the reef for new sea life that could cure illnesses. Andee befriends two young dolphins, Tingo and Tango. One day a terrifying storm rips across the island, and waves pull Andee out to sea. In their dinghy, his parents are lost forever. Tingo and Tango save Andee, and he becomes a member of their dolphin family. Little does he know, however, he is the Chosen One.

Exploring the underwater Lost City, Andee meets the Wise White Dolphin. Special powers are given to him, allowing him to become one of the great and legendry Aquanauts of the Marine Kingdom. Wearing his magical Aquanaut suit, Andee can breathe underwater, dive to great depths, and speed through the currents. He courageously uses his powers to daringly rescue and save endangered marine life, including dolphins, turtles and manta rays, from fishermen and poachers. The Wise White Dolphin mentors him, and he learns to talk to the jellyfish, which can communicate over vast distances.

But Andee misses his parents very much. So the Wise White Dolphin gives him a locket that his mother wore, and Andee sets out on a quest to find them. But, unfortunately, he’s also found an ancient tooth, the key to a dangerous world.  Using the tooth to open a submerged door, Andee is sucked into a vortex that whirls him to great depths where a sea monster attacks him.

His seemingly lifeless body is saved by Yolanda, princess of the merpeople. She takes him to her castle, where he revives and meets Yolanda’s formidable stepmother, the evil Zadora. As Yolanda’s father, the king, lies dying, Zadora plots to usurp the throne from Yolanda. A water spirit tells the princess and Andee how the treasures of the Lost City were stolen and are now stored in the castle.  Andee still wants to find his parents but now has a new mission: to return the treasures to the Lost City, reversing the greed of the merpeople, so that balance can be restored in the oceans of the world.

However, the greedy Zadora is plotting to do the exact opposite: to loot and plunder the oceans for gain. Who will win this epic struggle, and will Andee even survive against the terrifying power of the evil mer queen? Will he ever find his parents, and will he one day return to his true love, Yolanda?

What inspired me to write the book is?

I’ve always been fascinated by the ocean and the underwater world. I’ve always been a water baby, and I’m also a keen surfer, and that’s where I got my story idea to write the Andee series. I simply cannot wait to draft a new story onto paper when I get a burning idea in my head about new characters and their underwater worlds. And then, there is the thrill and excitement to see where the story takes me and the buzz of a total stranger reading my work and enjoying it the same way I did. It’s a bit like where we all like the same song and know the words to sing along. You can get the same thrill from writing stories if people like your voice and want to read more of your work. That’s really inspiring to me.

What do you hope readers can get out of your book?

Andee the Aquanaut appeals to children ages six to sixteen, engrossing them in spirited superhero adventures while enlivening vivid imaginations and boosting self-confidence. In addition, it teaches kids about the wonderful creatures of the sea, including dolphins, sharks, jellyfish, manta rays, electric squid, clownfish and others, making this series educational in a delightfully entertaining way.

This series combines a unique premise and unusual setting (beneath the waves) to share Andee’s actions on behalf of endangered marine life. Each book develops new scenarios and introduces new companions to aid Andee on his quest, as the evil power of the merpeople’s greed increases. The books will appeal to readers who enjoy vivid and unusual scenes, a fast pace with exciting action and dialogue, and an underwater world that stimulates their imagination.

There are currently three audiobooks available, and a colouring book has also been created to accompany the series. I am currently working on book fours audiobook, and I am also turning the series into a screenplay.

Simon was born in London. Being dyslexic has helped Simon become highly creative with a strong and vivid imagination. With a background in never-before-seen product design (including a bike that is also a surfboard and a skateboard), Simon spends most of his time living between London, England and Sydney, Australia, where his passions are surfing and writing. Indeed, his first series, Andee the Aquanaut, developed from a character he created while in the water! The series won an independent author award.

Simon constantly seeks new and creative forms of expression. He loves to write at a fast pace with never a dull moment and has discovered that writing for kids gives him the thrill he seeks.

With his enthusiasm for make-believe and creating new ideas for characters and superheroes, he feels the sky’s the limit; there’s so much one can tune into. This excitement motivates him to create inspiring original and innovative works, sparking the readers’ imaginations, taking them on journeys into amazing worlds.

Simon’s second series, titled Menosaurus, is for junior kids. With the same amount of action, an equally adventurous hero, and shocking villains, this series takes place both on Earth and in the depths of space. A race of super-intelligent dinosaur humanoids plot to reclaim Earth, which they believe to be rightfully theirs. The incredible illustrations are created by renowned, award-winning illustrator, Zoran Zlaticanin.

Most recently, Simon has completed Grey Squirrels’ London, a humorous and fast-paced animal adventure for junior readers. Following the hair-raising and hysterical adventures of six squirrels on a quest across London, England, this novel encourages readers to consider the oneness of all living beings.

Through the sales of his books, Simon supports various conservation organisations that are marine and rhino-related. With Simon, it seems anything that’s way out there is actually deep within.

For more info, interviews, and reviews, check out the web address below.