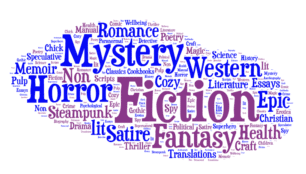 Writers who write in only one genre had better be very skilled in that genre or else they will be limited in their ability to demonstrate their imagination.  Writers should try to write in different genres because sometimes readers want to read different types of stories.  Also, different genres help expand the readership of writers.

I write more than science fiction.  I’ve been writing editorial letters since 1974.  I’ve had over 400 of my letters published in various newspapers.  Each newspaper limits the number of words they can publish from contributors.  This forces writers to pack as much information in a letter as possible.  It teaches them how to edit which is important for when they write longer pieces.  If a writer can condense eight pages into five or six without losing any important information, readers will be more likely to read what a writer produces.

I’ve written that I also compose music.  Verdi was an opera composer.  So was Wagner.  They limited the number of people that would hear their music.  Mozart composed all manner of music as did many other famous composers.  I was born the same day as Bach which was one reason why I wanted to become a composer.  He composed over 1,000 pieces of music which ranged from sonatas for single instruments to oratorials and even a comedic cantata titled “The Coffee Cantata” which was mainly about someone who was addicted to coffee.

I’ve composed all manner of music too.  I’ve composed over 400 Christian songs, some cantatas, an opera I need to orchestrate along with a musical, sonatas, ensembles, concertos, suites, and symphonies.  I composed an orchestra suite based on my book “Tales From Newgate” that was composed to accompany various chapters if they were ever used for a SyFy TV program.  Someday I might compose the opera “The Faithful Wife and Mother” which was performed in 1720 in Newgate, New York in front of Bach and Handel who were teleported there to hear the music of a local composer.  Maybe if my book does become a SyFy program I’ll get the chance to finally compose the opera along with some other period music.

The internet is a great venue for writers.  I’ve written at least 2000 pages of stories and essays in the last 14 years.  It is a great way to practice one’s writing skills.  Early on I contributed chapters to various stories that never had ends.  I did something I call “Badmanizing” a story.  I added so many chapters to some stories that people might assume the stories were my stories.  It was a fun way to practice my wirting skills.

There were some websites that asked writers to contribute material in various genres.  Helium was one of the sites that I contributed a considerable amount of material to.  I also wrote and completed three books on another site.  Two of the books are on disk while the third book, “Tales From Newgate,” was published.  I wrote about a superhero from another dimension named Drozin Kanfibulac for Helium which caused me to write an entire book titled “The Adventures of Mr. Amazing.”  I also wrote many comedy stories centered around a city called West Horvenknocker.  I intend on writing a book titled “West Horvenknocker” which will be a collection of stories; many being variations of stories I wrote from Helium.

Many writers are comfortable writing in single genres.  But they are missing out on writing in other genres that could help them when writing for the genre they enjoy writing in.  Edgar Allen Poe is famous for his horror stories and poems.  But he was also a mystery writer.  His story “Murders In the Rue Morgue” is one of those mysteries that has been made into movies.  But he is more known for stories that Vincent Price starred in like “The Conqueror Worm” and “The Pit and the Pendulum.”

Don’t be afraid to write in genres that you aren’t familiar with.  If you are comfortable writing romance stories, try writing comedy.  If you like writing poetry, write a script.  I’ve written poems, plays, books, stories, editorial letters, essays, commercials, jokes, and something I call probability stories in which I speculate how history might have been different if various things had happened.  The more genres you’re good at, the better your writing will be.  Your imagination will expand and your writing will have more depth.

Writers that can do a fine job of writing in various genres are like actors that can do all types of roles.  Cary Grant was a very versatile actor.  He could do drama, comedy, mystery, action, and biographies.  He was in the movies for decades and is someone many actors wish they were like.  He remained popular all that time.  John Wayne was versatile too even though he was known mainly as a western actor.  But he was also funny, romantic at times, and an action star.  When he died he received a tribute from the Japanese who he was portrayed as fighting in numerous war movies.  A media writer wrote: MR. AMERICAN DIED.  He was the symbol of what Americans were known as being.  He was bigger than life, bold, brash at times, and very positive about America.  When Ronald Reagan was governor of California, John Wayne was the one who allowed things to happen in the state.  If he approved of something, it became law.  He had that much impact.

Writers that want to have impact in the literary world should, in my opinion, be versatile and able to write well in various genres.  If the reading pubic likes to read romance novels one year and westerns the next year, writers that can write romance novels and western novels will have bigger reading audiences and will stay popular longer.  Versatility will also make each genre better.  Instead of writing a science fiction book that is stiff with two-dimensional characters, someone who likes to write comedy will give some humor to the characters and make them more appealing to readers.  I like to pack my stories with action too which would make them great for movies.  And since I have edited so many letters for newspapers, I like to put a lot of information in my stories.  I have written commercials too which means I know how to write material to be spoken.  If I can write dialog that sounds natural, readers will be more interested in what I write.

The more verstile you are as a writer, the better you’ll become as a writer.  Even if you write in mainly one genre, your ability to write in that genre will improve.  Also, if your grow tired of writing in one genre, if you write in other genres, you can take a break and write other genres of stories.  Consider writing like eating a meal.  If you ate potatoes during every meal, mealtime would become boring.  But if you add meat, bread, vegetables, fruit, and desserts, mealtime becomes more interesting.  Make different genres a smorgasbord of your writing abilities and you will allow your imagination to be unchained and you might enjoy a career in writing that has no limits.