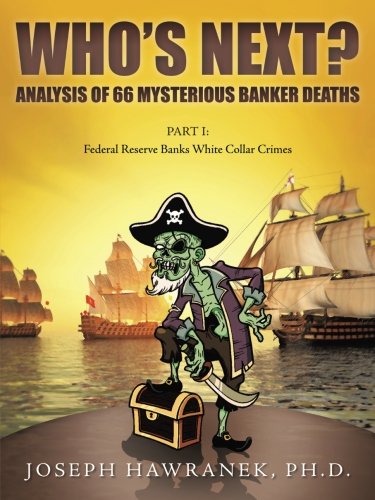 ABSTRACT In this book, I use the metaphor of Federal Reserve Banks to represent an armada of privateer pirate ships that raid upon the multi-trillion dollar per day digital flow of money about the world. When exposed to their theft and “fired upon at close quarters with Man of War” known as sovereign nation criminal legislative investigatory committees, they panic and run for cover.

The 64 gun Man of War are shown on the cover. They run for cover in various ways. This book raises the speculative possibility that one way might be to eliminate any of their officers and seamen that have knowledge of their previous law breaking – – – After all, “Dead Men Tell No Tales”. This analysis sizes the amount of “booty” that is being taken on an annual rate. It also lists the 66 mysterious deaths showing when, age, cause of death and employer that have occurred to date.

It correlates these deaths to a time line of events such as the start of investigations into LIBOR, FOREX and Gold Price Fixing that these banks have admitted doing. I found the correlated results of events and deaths interesting. There are currently 4 nations, U.S., UK, Germany and China operating 6 criminal investigative committees or “Man of War” investigating international banking operations. In contrast, the U.S. Regulatory agencies are “toothless” and meant for public consumption since the Federal Reserve directly or indirectly controls them.

They usually stay in the safe harbor, called “Do Nothing”. The occupations of the 66 dead executives are CEOs (11), traders, investment bankers (22), former traders, risk assessment officers (8) or data processing experts (5). JP Morgan (18), ABN AMRO (2), Citibank (1) and Deutsche Bank (3) are well represented with mysteriously dead high-level executives. The press lists many as suicides; some are in fact murder/assassinations, some questionable accidental and others – unknown deaths at an early age, which could easily be other then natural.

I use the metaphor that both Alan Greenspan and the British Privateer, Henry Morgan, were privateers whose owners sponsored their pirating. Both successfully brought booty home to their sponsors and both were rewarded with Knighthoods. My calculations show that Greenspan’s Federal Reserve Bank Armada takes about $14.5 trillion per year in booty from the citizens of the world and has been doing so for at least 10 years.

The Privateer pirates use legislation as their modern “Cannon” in raiding the financial flows of trillions of dollars. The solution is in legislation, nullifying some of the Laws that they put in place and removal of the Federal Reserve as a Central Bank and the removal of the Federal Reserve as being in charge of all regulatory agencies. The Dodd Frank law put this regulation in place. At least one instance of a significant Whistleblower against J P Morgan is reviewed. The whistleblower is an attorney that worked for JP Morgan, took notes, documented the illegal transactions, complained, was laid off but did not “shut up”. The government is now interested in her testimony.