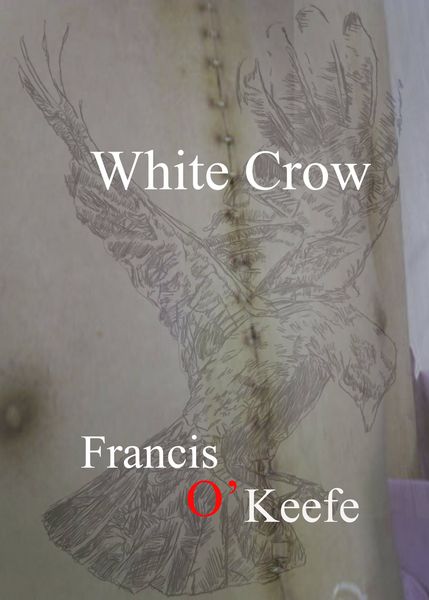 I was delighted to be approached to discuss my latest book White Crow by the Author’s lounge. I have not published my work for very long but have always been an avid reader and writer. I am currently writing my sixth book, but the other five can be found here   Francis O’Keefe New Young Adult and Adult Writer (francisokeefe.com); alternatively, you can follow my Twitter account @SnapeyWapey for further information and links.

I’m fortunate that my past, including education and work, has given me a strong base for my books. I studied art, design and graphics and became a graphic designer. After this, I became a personal assistant to the principal of an art school, a librarian, and later I studied and became a cardiac and ITU nurse. All of which I have found helpful not only in storytelling but in marketing.

Due to poor health and disability, I had to retire. At such a young age, this had a detrimental effect on my mental health until I began to write again and found it cathartic towards my condition. Like every writer, I would love others to read my books and feel the same joy they gave me whilst writing them, and I hope to see them grace a store shelf one day. For now, I relish knowing that they are enjoyed by those that read them.

I am known among my readers for the many twists and turns my books take and the journey you travel whilst reading them, and this is no different. I believe that it would appeal to anyone with an inquisitive mind. Possibly to those of a medical inclination, but its appeal is widespread. It provides an interesting and exciting look into human nature, the future and man’s desire to play God.

A middle-aged couple in their content and loving relationship have their world changed forever. During an uncomfortable drinks party held by Victor’s enemy, Ben, he suffers an extreme cardiac event. With his partner Rose by his side, he discovers that he has a congenital heart condition. His options are medication, and later an implanted defibrillator (IUD) or a pacemaker, surgery or what Victor had set his on, a transplant.

When his condition has placed him as a candidate for one, he marries Rose so he can pass on his estate to her. But his target makes him myopic towards the needs and desires of his new wife. The waiting for the procedure and uncertainty makes him prickly and quick to argue. When Ben, the party host, finds the downtrodden Rose at her lowest ebb, he shows a renewed interest in her. Due to Victor’s ban from all supplied counselling support and without her circle of friends, she falls prey to his charming advances. Her guilt and housemaid’s blackmail cause the affair to end, and her husband’s procedure goes ahead as planned.

She hopes and prays that he will make it through as she fears reparation for her actions. He makes it through the operation, and she stays with him in the ITU relative’s room for the night. The entire ITU is awoken in the night by his screams and him clutching his head. None of the staff could explain his description of the pain or the origin.

On her return to the hospital the following evening to see if that disturbing incident had reoccurred. She suffers a major shock as she enters a stationer in the hospital foyer. She discovers from the newspaper that her lover died by a single strike to the head on the same night of her husband’s operation.

She later finds after much research that the heart is that of Ben’s, and specific aspects of his personality are now similar, including some of his most vulgar and disgusting ones. How can this be,  and can Victor bear to share his body with someone he loathed so intensely?

I wrote this piece because, on the surface, I wanted people to ask themselves if this would be possible. Is there such a thing as post-transplant memory cells, or is it pseudo-science? Books and peer-reviewed research have been carried out along with patient accounts. Still, it is not taken seriously in the medical profession. A list of reasons often used to account for the reaction are reactions to anti suppressant medication, exposure to the media, stress, and comorbidities are often argued.

If it is accepted and possible, then it opens up numerous amounts of moral dilemma questions. Is this not just the work of a Dr Frankenstein character making his Adam? The practice is essentially bringing the dead back to life. Their personality and persona fighting with the alien body it now inhabits. Has humanity gone too far if this has proved possible? Could this explain why research into the phenomenon is underfunded and buried?