Wait for Me by J.M. McKenzie 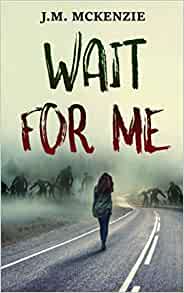 Wait for Me by J.M. McKenzie

Wait for Me is a post-apocalyptic love story set in the West Midlands and Warwickshire in the UK. It tells the story of one ordinary, albeit slightly introverted, woman’s extraordinary journey to get home to her partner at the start of the zombie apocalypse. Lisa and Neil promised each other that, in the event of a crisis of this nature, their first priority should be to get back home to each other. At the start of the book, Lisa meets Anita, a younger, slightly more reckless woman, who becomes her trusted companion on her journey. Wait for Me is a tale of love, faith, and loyalty in the face of unimaginable adversity.

I have always had a morbid fascination with post-apocalyptic fiction, and zombies in particular. I love exploring how people and places are transformed by devastating and chaotic events. As well as reading, I like to watch movies and TV series and my guilty pleasure is playing computer games on the subject. I have played a zombie in a scare event and even taken part in a BBC reality TV show called I Survived a Zombie Apocalypse, where I had the chance to try and survive for a week in an abandoned shopping centre in, hopefully, the closest I’m ever likely to a real zombie apocalypse.

So, when redundancy and lockdown presented me with the opportunity to write full-time, I decided to cut my teeth in this genre. I was inspired by the idea of a journey through locations that some of my readers will recognise, after reading The End of the World Running Club by Adrian Walker, which took me to some familiar locations close to by birthplace in Scotland, that had been devasted by a meteor strike.

While my target audience is primarily the sci-fi/horror, zombie apocalypse reader, I have tried to give the book more general appeal by making the main character an ordinary, but strong and determined woman, and focusing less on the graphic details of the violence and more on the plot and character development.  So far, this has proved to be successful, and I have had great feedback from readers who would not normally read this genre, citing the great storytelling, the authentic characters and the romantic theme of the book.

After getting close on a few occasions, but ultimately being rejected by multiple agents and publishers I was almost ready to give up, hell-bent as I was on following the traditional publishing route. However, I reminded myself that, at this stage of my life, I write simply for others to read and enjoy my work, and so I made the decision to self-publish using the amazon KDP platform which has proven to be a great success.  In the first 6 months since publication, I have sold the equivalent of almost 350 copies (including Kindle Unlimited Pages Read) and have received 20 reviews and 35 ratings, almost 90% of which were 4 or 5 stars.  Of course, like every writer, it is still my dream to get picked up by someone and for my book to become a best seller.

Even though the book reaches a natural end and is complete as a standalone story, several readers have said they would love to find out what happens to the characters further on down the line.  For this reason, I have written a sequel to Wait for Me called Trident Edge which is set 6 months after the end of the first book. Trident Edge is still in the editing process and is due for publication in the Autumn of 2021.

I am grateful for the opportunity that Authors’ Lounge have given me to tell you about my book and I hope that, even if zombies aren’t your bag, you’ll give it a go.