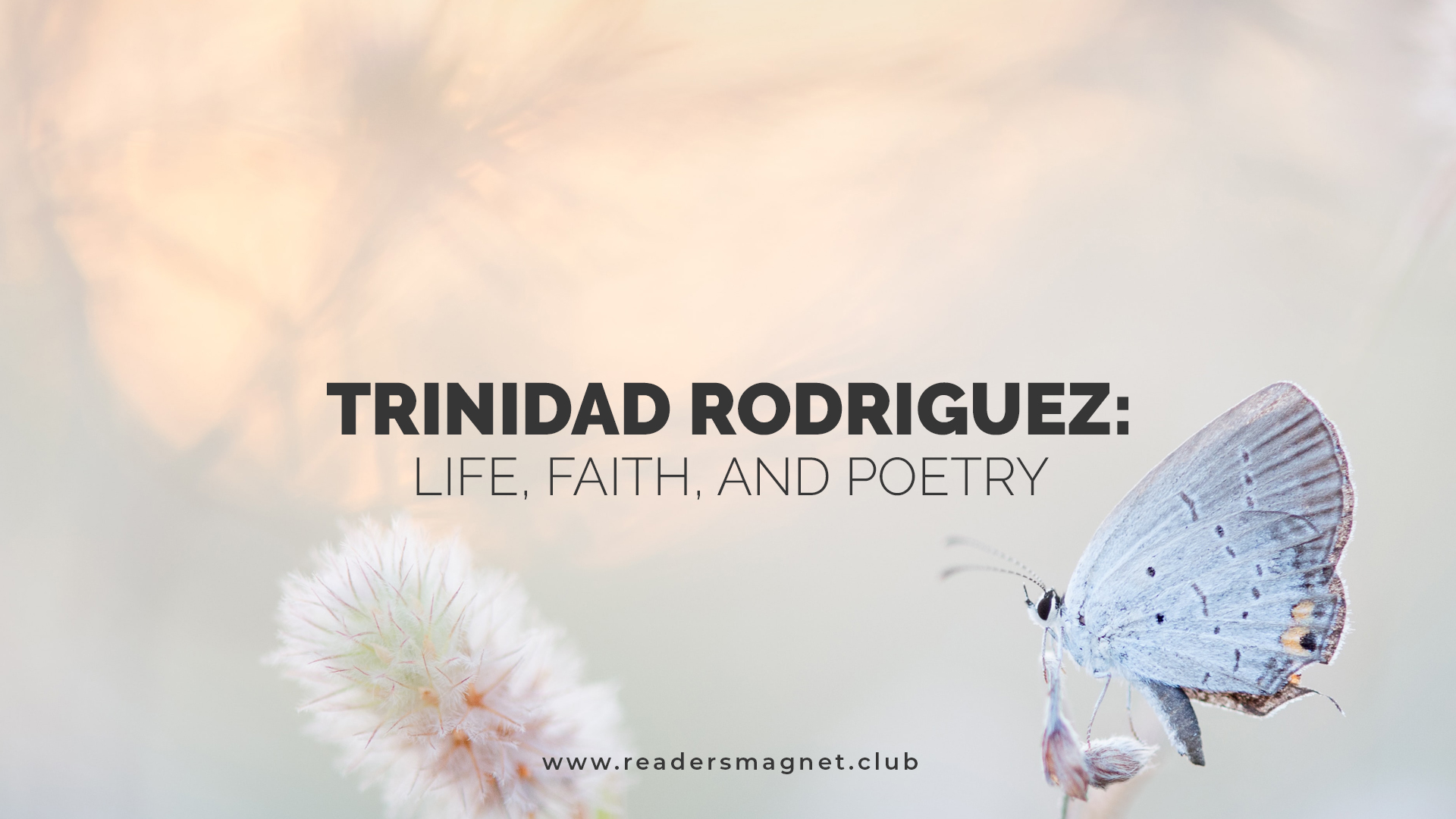 ReadersMagnet revisits the remarkable journey and the inspiring poetry of Trinidad Rodriquez.

oday is International Women’s Day, and it is only fitting that we pay tribute to their passion, determination, and resilience. To be a woman of the twenty-first century is to rise above the challenges and demands of modern society, politically, economically as well as to confront certain social and cultural issues and controversies. To be a woman in these trying times is to survive not only as an individual but also to uphold the dignity and decency of a woman. As a recognition of the importance of commemorating this year’s international day for women, we will celebrate the life, journey, and poetry of one amazing woman- Trinidad Rodriguez.

To say that Trinidad Rodriguez’s journey in life is extraordinary is an understatement. From her childhood in El Paso to her forced marriage and life as a single mom and teacher, her narrative arc is both inspiring and exceptional. Trini is the oldest of six daughters. Since her freshman year at Bowie High School, Trini’s father already began pressuring her into marrying a man who can support her. However, Trini was determined to finish high school, encourage by her teacher, who saw her potential and intelligence. In 1962, she finished her studies and even graduated as a class valedictorian. Trinidad Rodriguez got married at twenty years old. After two years, Trinidad Rodriguez completed her bachelor’s degree at the University of Texas in El Paso. Trini’s marriage produced three children. When her marriage failed, Trini found herself alone but determined to raise Betty, Liz, and Raul on her own.

Her ultimate inspiration is her children. Trini worked hard for her family and her career, and at age thirty-eight years old, Trini earned her Master’s degree. Trini juggled motherhood, career, business, and volunteer work. Aside from being a teacher, Trini is also a licensed professional counselor with her own business in San Marcos, Texas. She teachers full-time at the Ysleta Independent school district. She also worked with the Young Women Christian Association (YMCA). Despite her busy life, Trini is very generous with her time and energy. In 1984, Trini was recognized for her volunteer work with YWCA in her community. She was also honored by The Volunteer Bureau for her work as a counselor and teacher volunteer. Trini is now seventy-three years old and still continues her amazing life of service to the community. In 2015, Trinidad “Trini” Rodriguez achieved yet another remarkable milestone in her wonderful journey in life. She published the poetry chapbook Trini: My Life in Poems.

My Life in Poems: A Celebration of Womanhood

Trini: My Life in Poems is part poetry, part memoir. In her debut work, Trinidad Rodriguez shares her life journey through a collection of poems that also represents a chapter in the poet’s life and becoming. In these poems, Trini takes us to her childhood, her marriage, the pursuit of her dreams, her struggle as a single of three, and her rise to the top not only as a career woman but more important, as a mother who has helped and inspired her community.

Trini: My Life in Poems is a work of singular beauty that perhaps only Trinidad Rodriguez can pull of. While there are many women authors in this day and age whose journeys, have no doubt, inspired other women, Trini’s story as a young woman forced into marriage, struggle to earn her degrees, had to undergo abandonment, and left to raise three kids while building her career, and on top of that, perform volunteer work, is just exceptional, to say the least.

Trinidad Rodriguez’s passion and impact as an individual and a woman remind us of great cultural and historical figures such as Maya Angelou, Oprah Winfrey, Hillary Clinton, and many others who have made an inspiring mark on society.

Trinidad Rodriguez is not only an amazing poet, teacher, and community worker. She is also a loving grandmother. In the foreword of Trini: My Life in Poems, readers will get to know more about the amazing person that is Trinidad Rodriguez through the heartfelt letter of her sixteen-year-old grandson, Robbie.

To know more about Trinidad Rodriguez and her work, you can buy a copy or visit her website today.