The Lost Tayamu, by Ben Cass 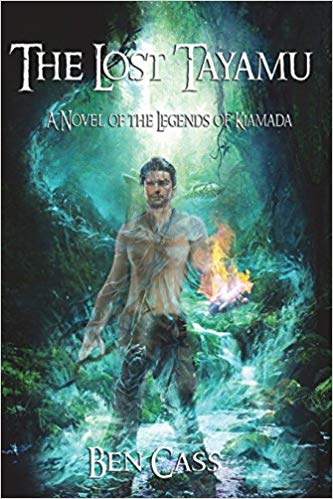 I’m excited to introduce Authors’ Lounge readers to the first book in my fantasy trilogy, “The Lost Tayamu”. This trilogy has been a LONG time in the making. I started writing it sometime in 2005, when I was staying at home with my infant son while he recovered from reconstructive skull surgery. At the time, we lived in the Central Florida area, and frequently had to travel to Orlando for errands, doctor appointments, etc. While it was only a 25 mile drive from our house, it could take anywhere from 45 minutes to 2 hours to get there.

While feeding my son one day, our 120 pound dog walked by me, and I had the idea that it would be a lot of fun to have an enormous dog that I could just ride to Orlando, avoiding all the bad drivers by leaping over them.

From that thought, I created the first two characters of what would become “The Legends of Kiamada” trilogy. (And yes, one of them is a giant dog.)

The other characters for the first book quickly followed, and I began writing my story. Now, as a pantser (somebody who plots out nothing, for the non-writers in the room), I had absolutely NO idea what was going to happen in the story. Words flowed from my brain to my fingers, and I furiously typed them down. I had a pretty good start, but then my brain decided it no longer cared, and it was several years before I wrote anything else again.

My grandparents would ask me about it every single time I visited, and every time I told them I was still working on it, my grandmother would growl, “Get off your arse and finish the damn book!”

Finally, in 2012, a few months before my grandfather passed away, the ideas began flowing again, and that June, I finished the very first draft of my very first book. It was long, somewhere around 200,000 words, and just didn’t feel quite right. A friend of mine, who’s also an author, suggested I find a natural breaking point and turn the story into multiple books. It was a good idea, and I followed her advice.

The first half of the book became the skeleton of “The Lost Tayamu”, but the second half was almost completely different from what became “The Uncrowned Queen”.

It took another six years for me to get serious about finishing “The Lost Tayamu”. My grandmother continued to ask me about it every single time I visited, and every time I told her I was still working on it, she’d shake her head and repeat her admonition.

In January 2018, my grandmother passed away. That very night, I had an uncontrollable urge to post on the NaNoWriMo forums about wanting a critique partner. I had a response in hours, and a few days later, began working with another talented writer, who fell in love with my work and helped me finish shaping it.

Finally, in June 2018, nearly six months to the day after my grandmother’s passing, I published “The Lost Tayamu”.

The book follows Jen Aston, a woman who, at sixteen years old, stumbled out of the forest and into the woods that fringe the small midwestern town of Groverton, remembering nothing about her life except her first name and age. She was soon adopted by the Aston family, whose young daughter Ellie was thrilled to get a sibling.

Twelve years later, which is where the story starts, Jen is living a good life as a news anchor, raising a teenaged Ellie after their parents were killed in a house fire.

Things suddenly change when Jen barely escapes three attempts on her life in the span of a week. Jen owes her life to the secretive new PE teacher, Coach Doyle, who has miraculously appeared to save her every time with fighting skills fit for a martial arts movie and reflexes just this side of impossible.

While Jen starts to fall in love with the charming Doyle, Ellie is shocked when she discovers something otherworldly in the coach’s barn, convincing her that Doyle is lying about who he is. Ellie does not like secrets being kept from her, and becomes determined to unravel the enigma that is Coach Doyle. The truths that will be revealed, however, will change all their lives forever.

Unlike some authors, I don’t write for a specific audience. I’m not really interested in trying to fit my story into a neatly-defined box. It’s a contemporary fantasy, written for those who say “Oh, I don’t like fantasy!” There’s a telepathic dog, an eagle/pterodactyl hybrid with the personality of Blanche Devereaux, and a foul-mouthed unicorn who can out-swear the humans.

I personally believe that EVERYBODY can like fantasy; they just need to find the right story. Hopefully, my story is the one for them. I don’t write for money—I mean, sure, it would be lovely to make money from my books, but this is not my full-time job, nor do I want it to be. I write because I hope my stories can help people forget about all their troubles for a little while. If my story only touches one person and makes their day a little better…well, then I consider that a success.

I published the sequel, “The Uncrowned Queen”, one year after “Tayamu” came out. At the time I was writing it, I didn’t know if that was the end of the story or not. Turns out there was one more book that needed to be written, so “The Shattered Earths” will be coming soon. I was hoping for summer 2020, but the pandemic altered my plans.

People are often surprised when they learn I write fantasy. I guess having a math degree and spending over 23 years teaching math and computer science doesn’t fit the profile of a fantasy author. I’m okay with that; I love keeping people guessing!