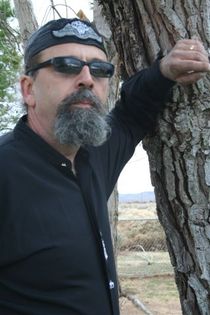 Hello. My name is David Donaghe and I write short stories and novels. I live on the high desert of Southern California. I would like to thank the Author’s Lounge for posting this article. The Cave Man Action Adventure Box Set is five short stories from the Cave Man Action Adventure Series. The first story, Biker Heaven takes place in 1968. Zombies rise from the grave, and Cave Man gets bit. Even though he is suffering from the virus and feeling a craving for human flesh, Cave Man helps his brothers in the Road Dogs motorcycle club get to safety. In the end, rather than becoming a flesh eating zombie, Cave Man lets the road take him and plows into a tree on his motorcycle at one hundred and ten miles an hour and earns his ticket to Biker Heaven.

In the second story, the Devils Punch Bowl, Cave man and his bros come back from Biker Heaven on their spirit bikes as trouble shooters to help the bros still alive on earth. The Road Dogs are in a war not only with an evil motorcycle club known as the Hell Raisers, but they are also battling a pack of vile demons from the pits of hell. The final battle takes place in a punch bowl shaped valley known as the Devil’s Punch Bowl. The stakes are high because it is more than just a fight between two motorcycle clubs. It’s a battle for souls.

In the third story, Bring a Brother Home, Cave man comes back from the great beyond to escort Sonny, a former Road Dog chapter president home to biker heaven. Sonny is dying from cancer. In the process, Cave man has to fight off the grim reaper as well as a horde of the Devil’s imps who want to drag Sonny’s soul down to the pits of hell. In the process Sonny get to attend his own funeral.

These stories are all a part of the Cave Man Action Adventure Series and they are available separately at Amazon, but you can read the entire series in one volume, with a few additional stories that were not published alone, if you download, Tales from the Lost Highway. I think you will enjoy the Cave Man Action Adventure Box Set, as well as Tales from the Lost Highway. They are fun, gritty biker-paranormal stories that will keep you entertained. If you chose to download any of my books I would appreciate it if you would post a review, follow me on twitter, friend me on face book and check out my other books on Amazon.com. Also if you do download any of my books, send me a message and let me know what you think. I love hearing from reader. Once again I would like to thank the Author’s lounge for posting this article, so until next time, keep the sunny side up and your face in the wind.

Tales from the Lost Highway