The Awakening, by Ben Berwick 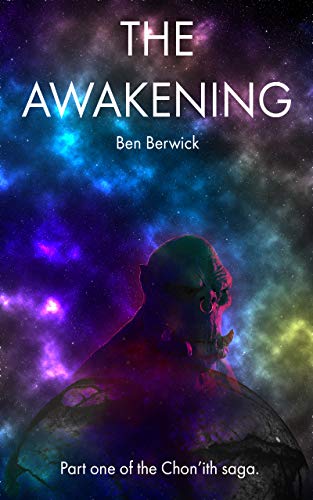 Greetings one and all! I have been kindly invited to submit an article to The Author’s Lounge, and I wish to thank Elizabeth for the opportunity.

So, what can I tell you all about myself, and about my first ever book? Well, to begin with me, I am a child of the 80s but I like to think that the 90s are what formed my tastes. I grew up with the likes of the Teenage Mutant Hero Turtles, Power Rangers, Duck Tales, The Lion King, and later the Pixar movies. I also grew up with the crew of the Enterprise-D on Star Trek: The Next Generation, and from there I found myself utterly hooked on all things Trek and most things sci-fi.

This love of science fiction has certainly shaped me, and sometimes in ways even I didn’t expect. Alongside the love of the action and adventure, I took moral and ethical lessons from a number of places. Star Trek taught me the value of diversity and respecting each other. Star Wars taught me that a great and good person can come from anywhere, and Doctor Who taught me the importance of never giving up. These franchises have not been my only sources of inspiration (I can look to my family for so much love and faith), but the characters in these shows have become dear to me over the years.

Another major love, as I mentioned earlier, would be Disney. As a child I loved Dumbo and Peter Pan, and as already mentioned The Lion King. In fact, The Lion King (the original version) is my all-time favourite film, even now. It recently (along with Star Wars) inspired some artwork of… well, I’d say reasonable quality. Judge for yourself.

Anyway, the upshot of all this is that I love science fiction and my love of the genre quickly extended to books. Alongside the inevitable Star Trek novels, I discovered new universes – The Night’s Dawn and Greater Commonwealth trilogies by Peter F Hamilton, and the Honorverse by David Weber, stand out for me as two examples of incredible world-building and compelling, believable characters. In my own quest to become an author, I’ve drawn a great deal of inspiration from those two authors, along with a few others – I couldn’t list them all here and now, it would consume this article!

The fruits of their inspiration manifested in The Awakening, that began life under a different title and during the summer of 2019. I took to writing bits and pieces of it on my phone at work (during particularly slow days on the shop floor), and fleshing it out at home on the laptop. At the beginning of 2020 I switched jobs and focused on that, and then the pandemic struck and lockdown happened, a bad situation but one I was determined to make the most of. I worked hard to put together the story, edit it (with the generous assistance of my brother, who also designed the cover art), and then self-published on Amazon. It felt like something of a blur, and at times the process was quite emotional – particularly when I finished the final chapter and closed the book, so to speak, on this project.

Only, it didn’t end. I’d conceived a larger story and actually written that story, but decided it would be better served by splitting the story into two or three component parts, given the flow of the tale. The Awakening is part one, though even that saga is not a closed book. It’s out there for anyone to buy and read, but it’s being substantially re-written. The story will be more or less the same, but with greater detail and more nuance. I don’t have a date in mind for when it will be ready, but it will happen, and from there, the overall story will continue.

In the meantime, The Awakening is out there, and whilst I won’t dare to claim it’s a literary masterpiece, I’d like to think it’s got some good set-pieces and that it touches upon some importance themes – the role of religion in society and how it can be a positive and a negative force, sometimes at the same time., is something I wanted to explore. I’ll leave you with where to find me, and where to find the book. I hope you like it.

I tweet (and show off more of my freaky artwork) as darth_timon.

Finally, The Awakening is available on Amazon:

Thank you for your time.