Sandra Kopp on The Epthelion Series 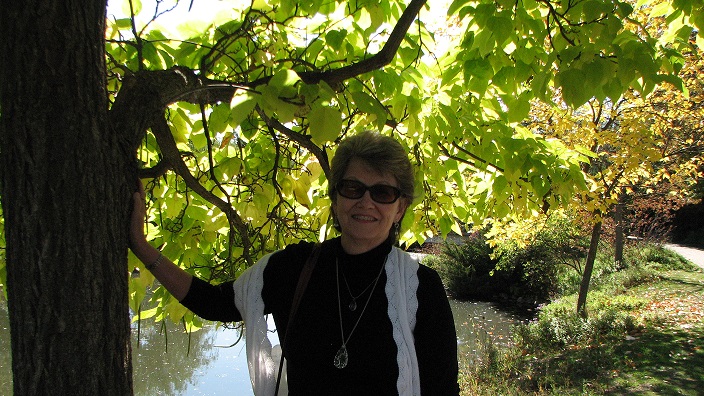 From the time I could hold a book I have been an incurable readophile.  Growing up in the 50’s I never saw much television and no video games.  Dad bought our first set when I was four or five: a black-and-white Westinghouse encased in a blonde cabinet. While a beautiful piece of furniture, the images playing across its screen didn’t interest me much. However, books like Heidi, the Trixie Belden and Nancy Drew mysteries, and the quirky and delightful Mrs. Pigglewiggle captivated me right up the last page.  Over the years I read voraciously and once in a while would scribble out a story or two.  By 2003 writing had become my passion–my DREAM life.  I had ideas for a ghost story, a fantasy, and a children’s series, and that year decided to put those ideas into print. Most of my ideas arose from my own life events, but the Lord of the Rings trilogy, directed by Peter Jackson, influenced what would become the Epthelion fantasy series.

REALMS OF GLORY, REALMS OF DEATH (Book 1 of the series) was intended to be a single book, a story of courageous people facing demons without and within, attaining victory and enduring peace in the face of insurmountable odds.  I had no developed plot; only the image of a young woman standing outside a ramshackle cottage at sunset. The dying sun stained the cottage rust red. A dead tree behind her lifted skeletal bleached branches to the sky.  The wind tousled her blonde hair and stirred the sparse native grass at her feet.  She contemplated the darkening sky, a haunted expression clouding her face as she tried to decide to which of the mysterious kingdoms surrounding her she could flee.  Whether merely unhappy or facing mortal danger I could not tell, but as she began to speak a tale of indescribable betrayal and tragedy unfolded that made me wonder:  How do you retain your sanity when the unendurable shatters your world and destroys all you hold dear?  How can you ever learn to love or trust or laugh again?  Her name was Merewyn. Two sorcerers, Ryadok and her own cousin, Lucius Mordarius, ravaged Epthelion in a brutal campaign that rocked its very foundation.  Mordarius murdered Merewyn’s family and, after torturing and abusing Merewyn, consigned her to slavery.  With a better defined plot, I began designing the setting.  Six kingdoms composed Epthelion: Barren-Fel, the mountainous, densely forested eastern kingdom from which arose the ruthless Ryadok, empowered by pure evil, and his supernatural minions; San-Leyon, equally forbidding, home of the reclusive woodsmen hunters; agrarian Liedor, modeled after German and English farms; affluent, hedonistic Valhalea; Ha-Ran-Fel, home of the savage nomadic Horse Lords patterned after the ancient Scythians; and Nimbia, situated atop the precipitous Alpenfel mountains and peopled by the mysterious Arganian mystics. Only Valhalea, Liedor, and Nimbia were truly civilized.  Barren-Fel and San-Leyon were primitive wilderness kingdoms, the Ha-Ran-Fel Horse Lords nomadic and cruel. The Nimbian mystics sequestered themselves in their cliffs, cold and aloof.

Except for one.  Arron Helgaard, empath, healer, and rising Arganian skilled in the magical arts, heard the call to leave his secluded order and use his gifts to render aid to the beleaguered masses.  Branded a traitor by his mentor and declared dead by his family, he set forth with his younger brother Davon and two seasoned mercenaries, Charles Bordner and Hans Ogilvie.  Fate drew them to Merewyn and after her rescue Arron devised a daring plan, in which each had a part, for the sorcerers’ demise.  But then Fate scattered them to the far reaches of Epthelion: Arron into the black bowels of Barren-Fel and Merewyn onto the mercy of the ruthless Horse Lords.  Would each be able evade Ryadok’s supernatural minions in a land notorious for devouring its inhabitants?  Could they hope to reunite and enact their plan?  A story of human resilience, perseverance, and faith emerged.  My characters not only survived but thrived and, yes, saved their world.

A happy ending, but not the end of the Epthelion story.  The scene that began it all–the maiden outside the cottage–never appeared in REALMS OF GLORY, REALMS OF DEATH.  I had to tell her story, and thus began RED DAWN, ETERNAL HOPE, Book 2 of the Epthelion series.  The sorcerers’ war had left a massive wake of death, destruction, and distrust. People from Barren-Fel who had moved into Liedor and never followed the sorcerers were scorned, maligned, and shunned. Many, along with others simply wanting a new start, emigrated to the new colony of Teptiel situated in the foothills of Nimbia’s Alpenfel Mountains.  My mystery maiden became Melinda Greene, a seventeen-year-old from southern Liedor whose fiance and father died in battle. Destitute and desperate, Melinda’s mother arranged a marriage for her to a rich butcher three times Melinda’s age.  Unable to accept her fate, Melinda fled to Teptiel along with Luwanna Frye, one of the newcomers from Barren-Fel. There, at a gathering, she met a

handsome and prosperous young farmer named Eldor Rand.  Melinda was immediately smitten, but Eldor yearned after a coquettish blonde already engaged to a neighboring farmer. Unable to break their engagement, Eldor turned to Melinda, reluctantly at first but then with growing ardor.  Melinda realized her fondest dreams when they married–but the dream quickly soured.  Eldor, provided a hovel for a home and then, preoccupied with his herds and fields, lived apart, returning only rarely to the cottage.  Whispered rumors told of arcane rituals held in the hills at night. Livestock disappeared, and then people. Monstrous beasts prowled the countryside in the darkness. A horrified Melinda discovered Eldor’s true agenda for her.  Had she found out in time to escape with her life?

Arron Helgaard enters the story.  His courage and deportment had so impressed his Nimbian countrymen that they welcomed him home; however, Arron’s marriage to a non-Nimbian along with his decision to settle in Teptiel cost him his Arganian status.  His mentor Baldimora allowed him to retain his healing knowledge, but restricted his empathic abilities and quashed completely his magical power.  Even so, Arron ascertained that the demonic entity who empowered Ryadok had surfaced in Teptiel.  Many of Teptiel’s prominent men served this entity and it was they who, transformed into beasts, terrorized the countryside.  He must again face his otherworldly nemesis and break the shackles binding his world—only now as a mortal.

TIDES INTO OBLIVION, Book 3 of the Epthelion series, completes the trilogy.  A gleaming red castle magically appeared high in Barren-Fel’s Mystic Mountains.  Erected by the demon power, it awaits anyone willing to sell their soul for the authority to ascend its throne.  A broken-hearted Hans Ogilvie confided to Arron Helgaard his beloved bride forsook him to follow the demon and became more evil than Ryadok.  Hans disappeared shortly afterward.  Realizing this demon must be destroyed before Epthelion will ever be free, Arron began his quest.  It culminated to a final showdown with the demon, an entity that cannot die–but might it be vanquished, and can Arron discover the means before the demon’s chosen one ascends the throne?

THE EPTHELION SERIES swept me into a beautiful and enchanted world inhabited by a colorful array of characters.  From pristine forests to towering mountains to windswept steppes; genteel farm folk, hardened mercenaries, stalwart warriors, shapeshifters, shadowy villains and gallant heroes, epic battles and harrowing escapes: Epthelion delivers it all.  Action, suspense, and humor intertwine into an intriguing tale.  I loved writing it.  And I’d love to share my world with you.