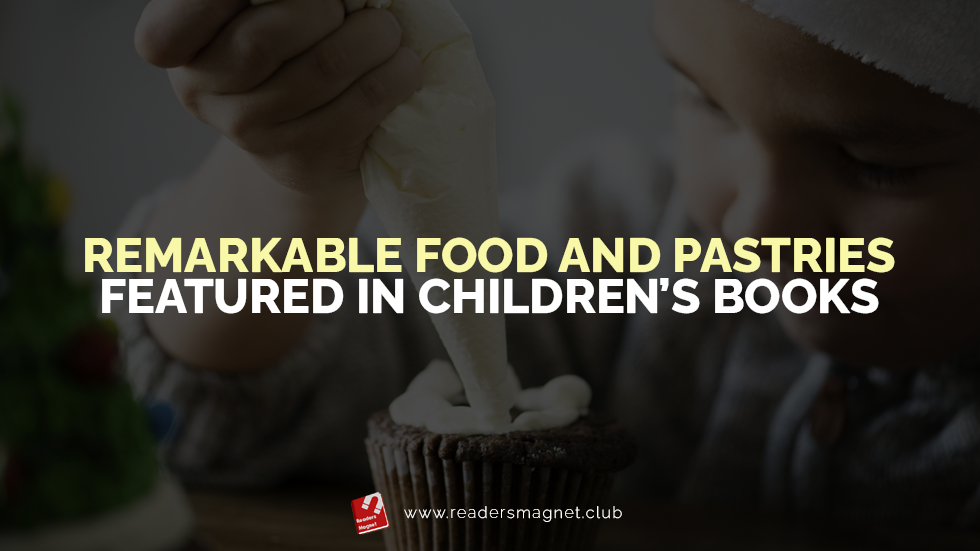 Food and pastries play important roles in kids’ stories, such as Christmas cookies for Santa in Nelibeth Plaza’s book, Is It Santa?

From The Buns that a starving Sarah Crewe brought and gave to another starving kid when she finds a sixpence in Frances Hodgson’s A Little Princess to Christmas cookies for Santa in Nelibeth Plaza’s book Is It Santa, food has always played a particular part in many kid’s stories. Whether as part of an iconic scene or something the main characters always consume, these tasty dishes helped immortalize many children’s books throughout the years. Today, we will feature a number of this fantastic food that has been a significant part of the stories we grew up with and those in modern children’s books.

Wonka Bars in Charlie and the Chocolate Factory

It’s hard not to include Willie Wonka’s famous Wonka Bars. Among the many products featured in Roald Dahl’s 1964 novel Charlie and the Chocolate Factory, including Wonka’s Whipple-Scrumptious Fudgemallow Delight, The Chocolate River, and Everlasting Gobstoppers, it’s the Wonka Bars that inspired the production of actual Wonka Bars sold in the market. The chocolate bar serves as a significant part of the story in the book. It is Willy Wonka’s signature product and the chocolate bar that contains the Golden Ticket. Since its publication, Roald Dahl’s work has been adapted into movies and is among the most unforgettable books in children’s literature.

Turkish Delight in The Lion, the Witch, and the Wardrobe

In C.S. Lewis’s The Lion, the Witch, and the Wardrobe, one of the main characters gets lost and is found by the evil White Witch. She offers the boy anything she wants to eat, then requests the Turkish Delight. Turkish Delight is described as a sweet candy made of starch and sugar. It comes in rose, orange, and lemon flavors. The Turkish Delight is so delicious that Edmund Pevensie agrees to bring his siblings to the White Witch once they get to Narnia. Although the food is a symbol of Edmund’s weakness of wanting so much that he’s willing to risk others, even those he loves.

Christmas Cookies for Santa in Nelibeth Plaza’s Is It Santa?

Who doesn’t love Christmas Cookies? They’re sweet and delicious, and they remind us of happy moments during Yuletide season. The Christmas Cookies in Nelibeth Plaza’s book Is It Santa play an essential part in the story. Based on actual events, Is It Santa follows a family as they try to uncover the secret behind the Christmas Cookies removed from the basket and placed on the Kitchen counters and adjacent living room. The whole family tries to desperately solve the mystery and discover the reason for the mess, to their great surprise. Christmas Cookies are among the most famous of all pastries, and having them featured in Nelibeth Plaza’s Christmas-theme children’s book makes the story even more memorable and heartwarming.

The traditional Treacle Tart features a buttery, flaky pastry crust with a sweet gooey filling and is one of the most famous desserts in Great Britain. Golden syrup is its main ingredient. It is often present during tea time, and most kids love it. In J.K. Rowling, there are many pastries, but none compares to the treacle tart. No less than the famous Harry Potter as its number one fan. However, Harry’s favorite is the Black Treacle which has a distinctively strong, bitter flavor. Black treacle has a richer color compared to its golden variety. It can be served hot or cold and is usually served with clotted cream, custard, or yogurt.

Lembas Bread in J.R.R. Tolkien’s Lord of the Rings

For Lord of the Rings fans, it is impossible not to remember the Elvish bread that Sam and Frodo brought with them in their quest to destroy the Ring in the fires of Mordor. Lembas or Elvish Waybread in the common tongue is no ordinary bread. It is known to nourish the eater for days by eating just a tiny amount. Lembas serve as the travel food for the Fellowship of the Ring in the books. Described as light brown on the outside with the color of cream on the inside with a sweet and pleasant taste. Its recipe is a close-guarded secret of the Elves. Lord of the Rings fans has tried replicating the dish using semolina flour, eggs, blanched almonds, melted butter, and orange zest.