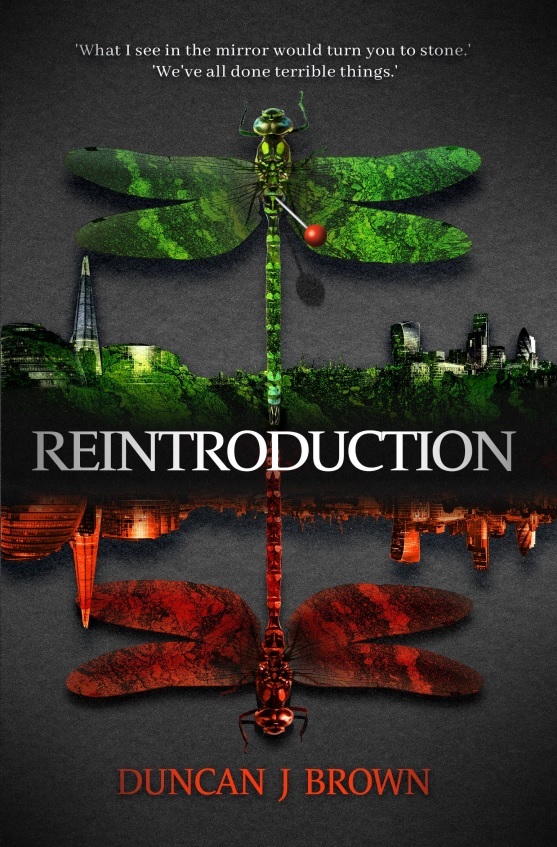 I was kindly asked by ReadersMagnet to write an article about my recently published book Reintroduction.

Reintroduction – published in August 2021 – tells the story of Robert Corrigan, a ‘Worker’ in a despotic future London where society is divided between Workers, ‘Non-workers’ – or ‘Nons’ and those who are judged to be subversives or ‘Transients’. With shadowy figures like Caspar Ulmer in full control of this hellish new world and disappearances a regular occurrence, Corrigan is charged with managing the mysterious programme, ‘Project Egret’.

What became Reintroduction was started as an experiment between writing projects about eight years ago. I decided to write something more imaginative and elected to do so on the boards of a writing forum. My idea was to publish chapters the way Dickens had done with some of his novels.

I shared the first few chapters without editing and soon gathered a following. Given the enthusiasm the nascent story received, I removed the chapters from the forum and started writing in earnest. At intervals I paid for assessments of the book, gaining confidence in my writing. I had a solid draft ready in 2016, but the book felt fanciful to me, and the villain seemed too extreme to be plausible.

So, I parked the project and started work on a collection of interlinked short stories. Then remarkable things started happening in the world and my attention was drawn back to Reintroduction. Rising populism saw Donald Trump and Boris Johnson placed in power, the impact of Brexit was beginning to bite and finally we were hit by the Covid pandemic, and I knew the relevance of the book was to be found in this moment.

Any misgivings I had about my villain being OTT were pacified by the vulgarity of the Trump administration. I had written an uncomfortable vision of a future that I dreaded, one where the marginalised found themselves yet again excluded, impoverished, and segregated. As the climate crisis also worsened, I sensed the relevance of envisaging a world where the climate is as oppressive as the regimes under which people are forced to live. The sense that we’re sleepwalking into darkness seemed to call out for a story.

I’m a British-America author born in the UK in 1963. My family moved to Massachusetts when I was four. As an adolescent, I expected to be attacked for the slightest hint of my real sexuality identity. I yearned to escape a culture where my peers taunted me, and my parents threatened me with hospitalisation and treatment if I ever owned up to being gay. Subsequently, I returned to the UK in 1982 to study and those years became formative for me as I escaped small town USA and the homophobia that left me fearing for my life.

I lived through the AIDS epidemic and the introduction of anti-gay legislation by Margaret Thatcher’s government, leaving me acutely aware that rights can be stripped away even if you’re dying in your thousands. I suffered from low self-esteem and survivor guilt, a heady concoction that led me to taking risks at the height of the crisis. My promiscuity during this period sometimes felt like cumulative acts of self-harm or even attempted suicide. I’d also been let loose in a candy store after years spent locked in a closet. Disentangling lust from self-destructive urges is an impossible task and this remains a useful psychological space for me to study as an author.

I studied as a visual artist for seven years gaining a Fine Art degree from Goldsmith’s University and exhibited in galleries until the mid-90s when I started making short films. A fascination with writing dialogue eventually led to writing scripts, short stories, and novels.

I cannot stress enough the importance of finding a good editor who will challenge and work alongside you as a partner. I established a strong relationship with my editor, collaborating closely for eight weeks to bring the novel to the level of finish needed to do it justice.

Reintroduction is my first fully realised novel, and current ecological and political crises inspired me to explore this dystopian future. I used my own experiences in business and as a gay man to shape the world I depict. My model for this world is not drawn from pure imagination. The true model is the recent past and just as importantly the world we now find ourselves living in. The world today is as frightening as the one I endured as a traumatised gay adolescent. It has the same level of dread for me as the London of the ’80s and ’90s.

Dystopia is the right form to imagine what might be if we do not take heed of the more obvious warning signs. As I watch the planet I love and appreciate being abused, possibly damaged beyond repair, I feel driven to provoke discussion. I have no answers, only questions. I am not seeking to proselytise or evangelise a solution but simply to tell a story that feels relevant.

I present a world that contemporary readers will connect with but one with sufficient strangeness and threat to make it compelling. In the form of Gregor – an android and others of his kind – I am also able to consider consciousness and being. To me, posing ontological questions about what it is to be human is as important as querying the way we treat one and another and the planet we share.