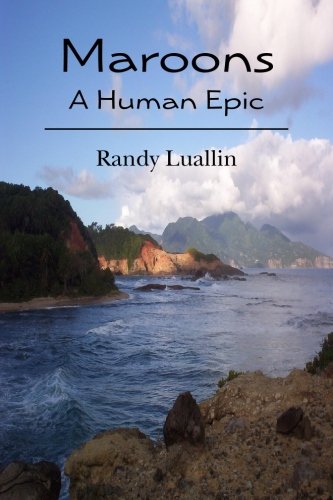 I have always wondered what was beyond the next hill.  I took my first adventure with two friends as a junior in High School when we drove from Colorado to Alabama and back in a Pontiac Catalina convertible.  We made it home with pennies and a quart low on oil!  From there it has been non stop.  I have visited all the continents, climbed many of the mountains and hiked many a trail.  One such trail was around the Caribbean island of Dominica, the eco isle.  While climbing the highest peak my girlfriend and I got hopeless lost in the jungle and spent the night in the forest. It was during this event I received the download almost in entirety for Maroons A Human Epic.  Maroons The Journey was a necessary sequel and in it my theory of SOM (Substance Other than Matter) that explains what many call spirituality.  The sequel to come Maroons  Mescege -nation is a look into what might be in the future. In all of these books, while fiction, I have attempted to make the story realistic and something that could actually happen.

What is even more important is that many of the events and experiences are something from my own life.  The characters are patterned after people I have known and the places are those I have been too.  I have always been an avid historian and the opening chapter is right out of history with my own choice of characters and twists.  When people read my book I always enquire which character they like the best?  This tells me a lot about them because I know each and every character from personal experience.

You will definitely find contained in the stories my political views.  As a Libertarian the concept of liberty and justice for all is paramount in an ideal society.  However, I understand the preponderance of peoples need to control and have power over other people  characteristic in humanity.  This is an ongoing theme and struggle that takes place.  Along with that you have the need to explain the meaning and purpose of life thru religion.  This also is addressed but not in a way of determining which belief system that prevails but how people seek to bring order and again ultimately control thru religion and the unknown.

It is amazing how many of the things we consider of great importance such as politics, religion and societal order will immediately fade when faced with the basics of food, clothing and shelter being the need at hand.  And even more when survival is the primary focus.  Once you reach that low point and accomplish basic survival you completely re access the way you used to think.

Then there is the issue of sex and relationship.  The rules of society are basically a product of the trial and error that have come about to create a peaceful co existence when living in a group.  There is no social norm universal across the earth and what does exist must be reevaluated from time to time.  Wether it be monogamy, polygamy or any other form of mating it must be adapted to fit the existing situation and needs for the species to survive.  Beyond sex humanity needs to bond and form deep alliances to create a safe haven and security.  This intricate web is also vital for survival.  It spans from person to person, family, tribe, nation.  The bottom line is that we do need each other!

Raising our offspring is what propels us farther or indeed keeps us isolated.  It creates a lot of what we consider norms and in many ways determines our evolution.  The hand that rocks the cradle is indeed important but much of who we are as a society is a product of our childhood interaction.  What we are taught and what we witness has profound impact on our adult life.

My life is indeed a product of all of this.  The public schools and the teachers I had.  The friends I made and the activities I participated in.  The television shows and movies I watched, the books I read.  The way my parents interacted with the neighbors, the trips in the summer, family get togethers.  The church I attended and the rituals I performed.  The Flag I saluted, the men I served with.  These have made me who I am.  For one I grew up with a very loving family from Kansas.   Raised in a conservative and loving Christian faith The Church of Christ it was however quite judgmental and restrictive.  Most of my childhood was in Boulder Colorado during the turbulent 60’s.  Watching Kennedy being assassinated, the Viet Nam War and the Hippie movement.  I ran cross country and track as well as avidly backpacked and climbed mountains.  An enlistment in the U.S. Army and a couple of overseas tours.  Studying abroad in Wales and then finally training to be a mason which became a passion.  Numerous relationships and raising twins I am now a great grandparent and loving life.  I have settled with my wife Rajni in a small town in the Black Hills of South Dakota.  It has been a great journey and Maroons is the product.  I hope you enjoy the journey!