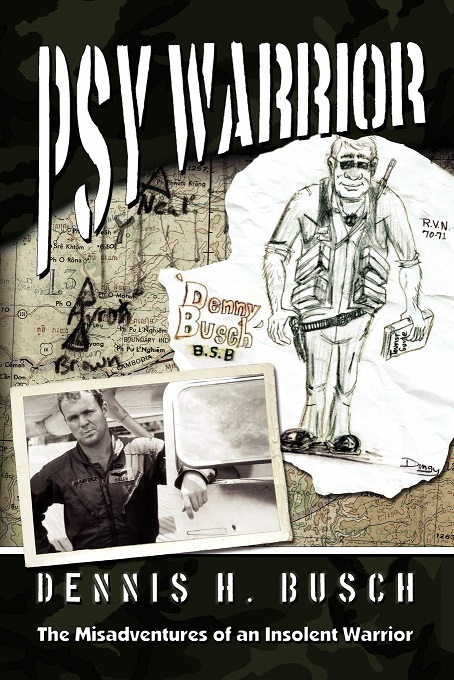 Finally, a humorous true story about events that took place during the Vietnam War.  Psywarrior is a firsthand account of a young pilot’s year-long tour in the latter years of the most unpopular war in American history.  You’ll be amazed at just how much trouble an insolent airman gets into when provided with the use of an airplane six days a week, a random grunt for a crew, a mission of dubious importance, minimal risk, and half of South Vietnam for his playground.  The sky is literally the limit.  You see, not every Air Force pilot’s experience was filled with perilous bombing missions over Hanoi, or vicious dogfights over the skies of the Red River Valley, or even gutsy exfiltrations of a downed pilot in the midst of the pursuing enemy.  No, there were other airborne tasks that had to be done as well – in this case, a mission that you probably never heard of.  This coming-of-age memoir is all about the misadventures of a young impertinent air-warrior in Vietnam.  So set aside all of the misconceptions you have been taught about that war and enjoy a good tale.  Psywarrior will never go down in the annals of great American heroism; there is NO blood, NO guts, NO glory, certainly NO heraldry.  There is NO fury, but strangely a great deal of sound, and it all signifies nothing.  Warriors in Valhalla will not stand up and cheer for this adventure, but they will get a good laugh and so will you.

Novel; Psywarrior: The Misadventures of an Insolent Warrior.

Denver, CO   Dennis Busch announces the release of his new title Psywarrior: The Misadventures of an Insolent Warrior this month. This book is changing the way vets and the general public thinks about the Vietnam War by casting a new light and offering a somewhat lighter perspective on history’s most unpopular war. This book is expected to make some waves in the veteran circles but Dennis Busch wants to share this story and offer a lighthearted chuckle. “Warriors in Valhalla will not stand up and cheer for this adventure, but they will get a good laugh” says Busch.

Part Memoir and part historical humor; this book is a first hand account of a young pilot’s yearlong tour in the latter days of the Vietnam War. Our young protagonist finds himself with way too much time on his hands, the use of an airplane and a random grunt as his flight crew. This book offers the somewhat skewed perspective of an Air Force Pilot who did not see perilous bombing or narrow escapes from lofty dog-fights but rather dull day-to-day airborne tasks. This impertinent pilot was able to get himself into plenty of trouble on these everyday tedious everyday missions.