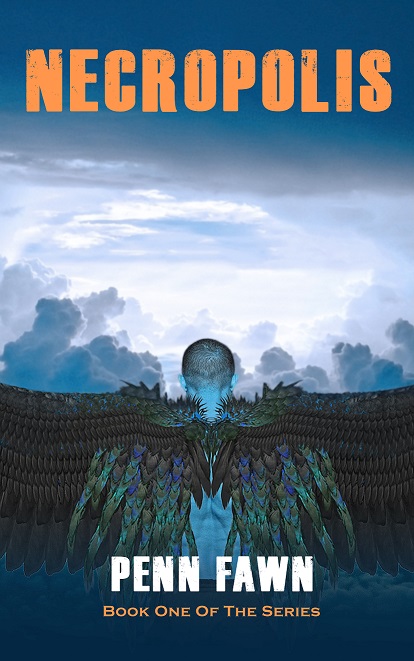 What kind of work is the Necropolis Series?

The initial setting, or the first few chapters is based in ancient Sub-Saharan Africa. The rest of the book is based in the afterlife. A more generalized description is it is a dark fantasy series about the afterlife. Eight men acknowledge the life they once knew ended but continues within the underworld/the afterlife.

Being cast into a lake of fire is one of a number of potential horrors they face should they fail to avoid the Shetani, malevolent spirits personified as men. These misanthropic and supernatural forces who work in concert with the necromancer, the chief practitioner of black magic and sorcery there, could not be more indifferent to their plight. The man eating ghouls, and the gargoyles they encounter while on their never ending quest to find safety aren’t any more hospitable.

In the midst of desperation to discover whether there is a way to find some place of refuge or save their souls, five of the eight men learn the necropolis, a diamond-studded jewel imbued with a magical power, is critical to their having any hope of finding salvation.

Aside from the name given to the jewel, the necropolis has a couple other meanings. It is the name of a burial ground of an ancient city featured in detail in a later book, book four of the series, which I’ve already written. The jewel was forged within the mountains near there. The final reason for naming the series necropolis is it is allegorical for hell.

Several factors. The major ones are books I enjoyed reading, but my fondness for apocalyptic, doomsday, or dystopian type art, music, movies and literature in general, and environmental issues are major inspirations. The Revelation to St. John the Divine of the New Testament, the ultimate piece of speculative fiction about the damnation of mankind if you ask me, is a major influence. I always loved reading about the opening of the seven seals and the rise of the four horsemen of the apocalypse, especially the fourth horseman. The symbolism of that book is off the hook, so to speak.

Chamber music with dark and heavy orchestration and extreme forms of music, like black and doom metal are all major factors that inspired and continue to inspire me to write. I like dark art, artists, and movies. Classic horror flicks like George Romero’s Night of The Living Dead, or John Carpenter’s The Thing, or scary Si-fi movies like the first two Alien movies are favorites of mine. H.R. Giger’s art and Zdzisław Beksiński’s paintings are major influences on me.

The environmental influences stemmed from watching how slowly but surely we are destroying the one known planet known that can sustain human habitation. Surely, in time to come there will be hell to pay on account of this. So, those factors in general are what got me going with the series.

Hopefully it will not take them long to see it is full of symbolism and allegory. On the surface it is a dark fantasy novel. A perceptive reader or someone with any kind of knowledge about reading literature will quickly spot or see all kinds of parallels to everyday life.

I’m working on trying to have people be aware it exists so I can get it reviewed. I have to properly promote it before I move on to releasing the next one in the series. It’s a long story, but basically it’s a rite of passage, so to speak, one has to go through if you want to have a successful career as a self-published author.

In short: You release your first book. Get it properly reviewed, a necessity if you want to be accepted at some of bigger book promotional websites. Once you meet their criteria, say you reach having ten reviews or more with a favorable rating, you move on to your marketing and promotional launch for your next book with those websites you aim to be promoted on. Bookbub is the main one.

Tell us a bit more about yourself

The main thing I need to state is I’m hoping to connect with anyone who is really into horror or dark fantasy novels. After that I should say I need more book reviews of my book. If anyone is interested in getting a free eBook of Necropolis to review, an advanced reader copy, please send a message to me at pennfawn.com/contact

Get your FREE eBook

Type “Book Reviewer” as your headline so I can give your reply top priority, and don’t forget to include the email address you want me to so send the link to so you can download the book.