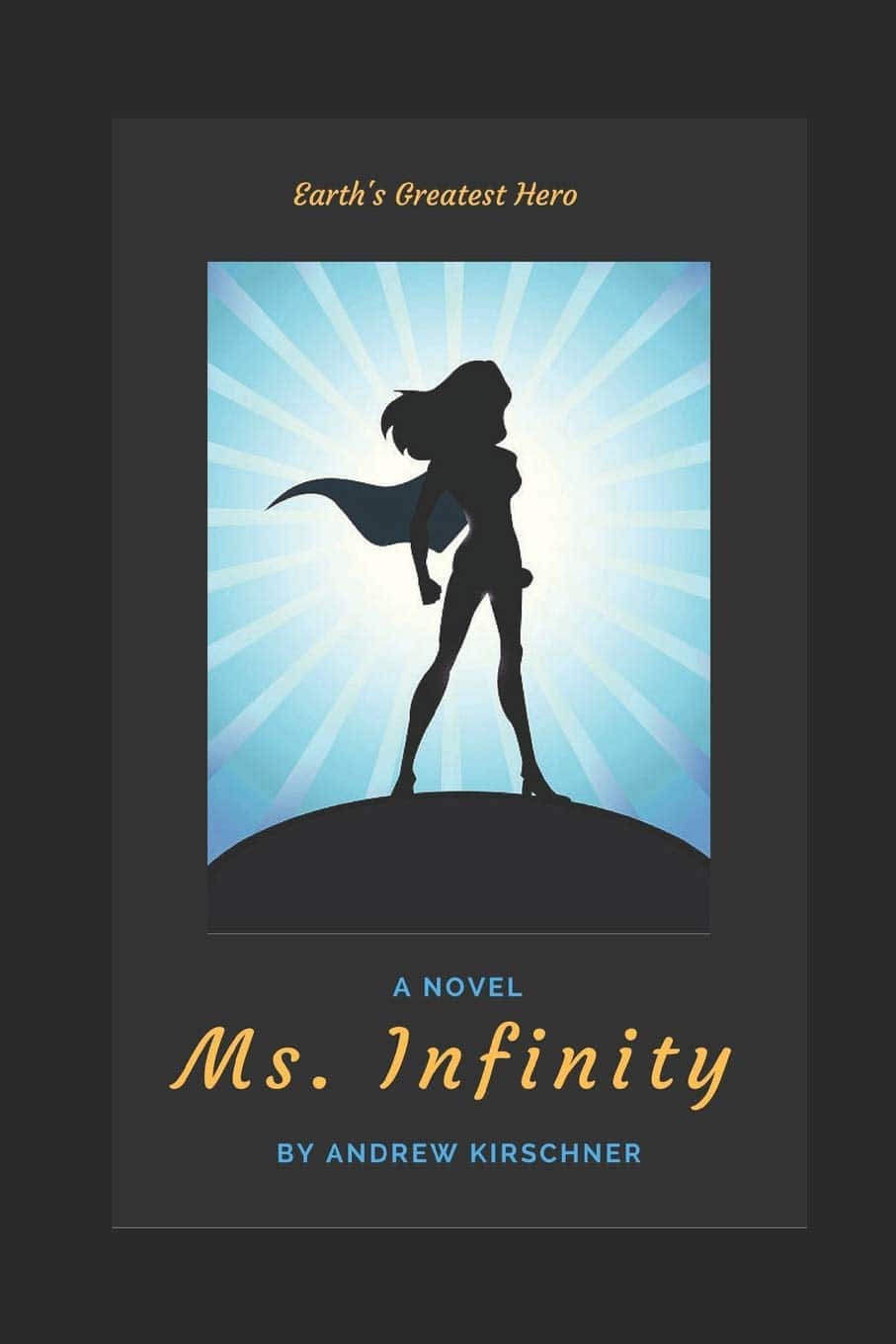 I thank Authors Lounge for the opportunity to showcase my work. Ms. Infinity: Earth’s Greatest Hero is the debut adventure of the eponymous hero. It stars Bonnie Boring of Queens, a petite customer service girl at the fictional Big Box superstore. A twenty-six year old “underachiever,” she lacks direction. She gives her mother attitude, laughs with her best friend Lisa Lin, and falls all over herself around her work crush Hal Holstein.

She is also secretly the mega-powered superhero Ms. Infinity. She came from a distant planet with her mother, and possesses many awesome powers.

One day, the Earth comes under attack from Misery, an old enemy from Ms. Infinity’s native planet. Bonnie is about to fly off to confront her when Hal walks in on her transformation. With no time to think, she decides to bring him along in her magnificent Starship Infinity. But the duo face many unforeseen dangers in the mission. And even as they fall for each other, Ms. Infinity must also confront uncomfortable secret from her past.

Ms. Infinity had several inspirations. I was a Wonder Woman fan since my youth, since Lynda Carter’s groundbreaking portrayal from the 1970’s. However I have been frustrated with the comics’ portrayals of her for a long time. I came to feel that she has been too precious and unrelatable. Since I obviously has no influence on the character’s direction, I started to think about how I might write a superheroine from scratch.

After a monumental career disappointment. I found myself working a second job as a cashier at a grocery store. The idea came to me of a powerful superwoman with a low-paying retail job in her secret identity. I was also increasingly influenced by my wife, who is always a powerful influence on me. Like her, Bonnie is outspoken, strong-willed, and has a powerful devotion to the greater good, as well as good heart.

I held on to my ideas for a long time, developing them quietly in my mind. Gradually a story even developed. I never really thought I was going to do anything with them. I never really thought of myself as a writer. I certainly never thought I was going to write a novel. But one day, specifically January 12, 2015 (Now Bonnie Boring’s official birthday,) I decided to sit down and bang out a few of these ideas. I figured I would just give it an evening or two, but then I just kept writing. I kept going back to it, night after night. Next thing I knew, I was sixty pages into this thing, and I wasn’t even halfway through. I was shocked. How was I writing a novel? It took many months of drafting and many more months of editing, but I worked as if I was possessed. It was as if this story forced me to write it.

Since it was released in November 2015, it has been joined by its prequel Ms. Infinity: Where Infinity Begins, and most recently by the werewolf drama Ms. Infinity: Infinite Moon.

There are a lot of things I hope readers can get from Ms. Infinity. Of course I hope people will enjoy it for its fantasy and its action and adventure. Bonnie is also a positive role model. Without being “perfect,” she still represents a symbol of female power. She has a strong sense of morality (with her mother serving as a moral compass.) I go out of my way to defy gender stereotypes. From the start, Ms. Infinity and Hal Holstein are a powerful woman with a non-powered man. Both are completely comfortable with the relationship and their roles within. I also take aim at ethnic stereotypes. Hal is Jewish and Lisa Lin is Chinese American, and both are working class. I have no patience for the myth of Jewish wealth or the “model minority.”

I am now working on the fourth Ms. Infinity book, where she goes against an evil Mary Poppins-type. I will be writing Ms. Infinity for the foreseeable future, with no end in sight.

I live in Queens with my wife and three teenage children where I work as a New York City teacher.