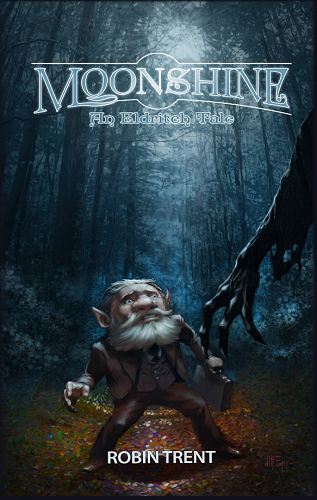 First of all, I would like to thank Authors’ Lounge for inviting me to submit an article about my book. I think this is great opportunity.

My fantasy book series takes place in Victorian England and is about the world of Elphame. But it’s also more than that. It’s about being believed, overcoming abuse, and about the struggles we take to grow and come into our own. The protagonist, Elizabeth Merkova, saw faeries as a child, but her mother put a stop to that by sending her away to an asylum. When Elizabeth emerged from the asylum, she didn’t talk about faeries anymore and she behaved and did what was expected of her. She got married, had children, and became a responsible adult. This is where the first book Moonshine picks up, we enter Elizabeth’s life as she is enjoying new motherhood. When one of her children is kidnapped and taken into Elphame, a changeling is left in their place. Now, Elizabeth has to try and convince everyone around her that she isn’t crazy, including herself and she has to deal with what was suppressed in her as a child.

I wanted to write a story where the woman is the hero of her own story. I also chose an adult woman, a mother, to be the protagonist. In fantasy, we often see teenagers being the protagonists through young adult fiction. I wanted to avoid that. I picked the Victorian era, not just because of the strict social morays against women being their own person, but because that was when the industrial revolution ended and we were separating from nature and turning more towards the technological. That theme also plays out in the books.

Women who want to read a good fantasy tale and see themselves as the protagonist. But also, anyone who enjoys a good tale.

Well first and foremost, I hope they just enjoy the story. I tried to be as entertaining as possible. I want to engage the reader. But also, I want my readers to know that believing in yourself is important and then anything is possible.

Moonshine is the first book in a five book series. My work in progress right now is the second book, Earthshine, and I already have the third book mapped out, so I am ready to start work on that when the second book goes off to the editor.

There is a lot more going on than is revealed in the first book and a faery war is brewing. I have read several books on Faery, including The Faery Faith in Celtic Countries by W. Y. Evans-Wentz and I try to incorporate as much folklore as I can by interweaving it into the story. I’m trying to remain as true as I can to the folklore, while taking poetic license with the fantasy part. It’s been a lot of fun to write.

I love books.  You could plop me down in the middle of a bookstore and I would be content for hours.  I love a new book, the crisp pages and the smell of ink wafting from them; the promise of possibilities.  I’ve been reading all my life and it was this love of reading that prompted me to want to become an author.  That and the fact that I have always done art in some form and I really came to appreciate the fact that art makes me feel whole.  When I finish a project I have a sense of completeness I can get nowhere else.

I chose software development as a career when I was young and I was told to be realistic about my career choices.  Even though, as a child, I was into all kinds of art forms from drawing, to wood burning, to sand painting, you would think it would have been obvious that I was a right-brained individual.  But art, in any form, was not a way to make a living, or so I was told.  And as happens to many people who reach their forties and realize that they chose this career path before they even knew themselves, I decided I wanted to pursue writing and live my creative life.  I chose fantasy as my genre, because everything that I want to read or see, whether it’s movies or books, is fantasy.  I get excited for anything that has a vampire, witch, magic, wizard, faery, werewolf, ghost, etc.  and that leaves me open to write a whole slew of books.  If I had to pick one, I would say a ghost story is my favorite.  I really want to write my version of a ghost story and someday I will.  I write for myself first because if I don’t enjoy it, why should my reader?  My influences would be Stephen King, Anne Rice and Kurt Vonnegut.  I read every one of Kurt Vonnegut’s books when I was sixteen and still love his work to this day.

You can find Moonshine on Amazon, here.