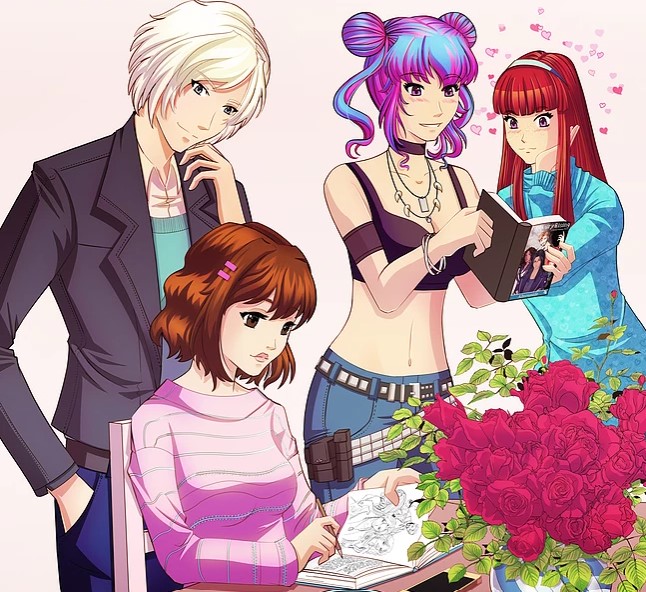 This is the first book in the Mercury-verse series, where Rist Ladon, the only heir to the Fae kingdom escapes an assassination attempt and is rescued by Lia, a human girl. As payment for her help, Lia uses Rist’s magic to cast a love spell and botches the job, leaving Rist and Lia bonded. When he meets Alden, the person Lia had intended to cast a love spell on, Rist thinks the magic had a different agenda. Desperate to break the bond, the group sets out on an adventure through the Fae lands. As Rist begins to uncover the truth about his kingdom, he also falls for this mysterious and dangerous man.
​
I wrote this story because I wanted to share a world that combined fantasy, love, and science. I have had a lot of fun creating characters based on elements from the Periodic Table. Bringing aspects of science into my fantasy world has driven me to ask more questions, improve my Google search abilities, and reach out to my high school Chemistry teacher. In book one I have characters based on Mercury, Phosphorous, and Iron. Creating characters is always an in-depth process, but using the traits of elements has made it a lot of fun.

Mercury Rising has been given several labels. I’ve been told the book is Contemporary/Fantasy, Romance, New Adult, and Young Adult. If I were designing my own label, it would read as – For anyone who loves friendship, humor, fairies, and an attempt at accurate science.

As someone with Dissociative Identity Disorder, it’s always difficult to write about myself. Most of my stories are co-written by two or more of the personalities in my mind and all of us are involved in the process of loving them. I’ve lived with DID since I was young and I was diagnosed over three years ago. Writing with different alters (alternative personalities) means working on more than one project at a time. This is why the books are all listed with the author as Altersaside.

Being the host of a system can feel like being a main character. I’m living in the world the most often and interacting with people in our lives more than everyone else. But, like many main characters, I’m not the most interesting. I take solace in knowing that we are all a part of each other. As a whole system, we make up the person that most people know as Lilly. Dissociative identity disorder is so different for every system that experiences it. Which must mean it’s different for people who interact with systems as well.

For example, other systems might tell you when they switch. We don’t do this because it’s jarring to the conversation. Most of the time, I’m co-conscious anyway, so I will remember what’s been talked about. Secretly, I like it when the person I’m talking to notices. It makes us feel known. However, if I bring it up before they notice, the conversation turns awkward. And I’m not a fan of awkward unless it’s amusing in some way. Being a host doesn’t mean I’m the boss, or even that I make most of the decisions.

There’s a network of communication that goes on in my mind to make decisions. Everything from life decisions to clothing choices. It used to be worse though, in my teens and childhood I wasn’t a part of the decision making process. I was just given information after the meeting took place. It’s better now. Time, a safer life, maturity, and hard work in therapy. That’s how it got better. Now we are focused on communication and working together. It’s not a perfect system, but it’s one that works.

If you’re looking for help with understanding more about dissociative disorders I recommend starting here. Special thanks to Author’s Lounge for creating an online space to share stories! Lots of love to everyone! -Altersaside