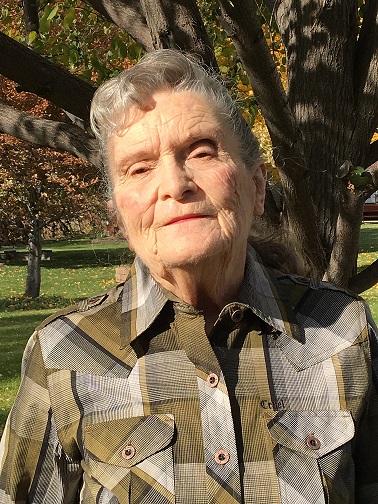 I’m so grateful to Reader’s Magnet for the opportunity to tell my story.  I’m in hopes of helping others to more fully appreciate the scriptures and let them enrich their lives.

I was born 1938 and raised in the small town of Hatch, in Southern Utah.   When I was six months old, my mother became very ill and could not care for me, so my sister-in-law Flossie, took me.  My father had been married and had a family of three before he married my mother.  His children were all married when he married my mother.   Flossie was childless and became very attached to me, so by the time my mother was well enough to care for me, Flossie couldn’t bear to let me go.  I tell this because it influenced my entire life.  Flossie gave me so much love.  I knew what real love was.  Two months before my fifth birthday, she became ill with pneumonia and passed away.  I had to go back to my own family. My own mother resented me and I was not treated well.  She was an extremely unhappy person and was very difficult to live with. It was so hard for me to be rejected when I’d known so much love.

My father was a very strict, but loving person.  He was very much into the scriptures and I knew that he knew Jesus….almost as if he was his best friend.  Being Mormon’s, we do have three additional books of scripture, and he studied all the scriptures.  He knew them backward and forward and spent many evenings telling us Bible and Book of Mormon stories.  As a young man, he was herding sheep and started reading the Book of Mormon. He read it four times before he went home again.  He decided to read it once a year for the rest of his life.  He read it sixty-five times!  Because of his love for, and knowledge of the scriptures, I was greatly blessed.  I was taught well.  Even though I had my struggles growing up, the spiritual dominated and I gained a very strong testimony of Jesus Christ at a very early age.

My dad also started teaching me about the Communist conspiracy when I was very young.  By the time I was an adult, it was easy to see what was happening in the world and in the government.  I learned as much as I could.   I don’t know everything, but I know enough to be very concerned for those who know nothing about the dangers we’re encountering because of growing Socialism.  There is so much unrest and contention.  The only way out of this mess is to know the truth.  The truth is found in the scriptures.  God cannot lie for He is a God of truth.  I’m grateful to Reader’s Magnet for giving me this opportunity to further enlighten others.

I started seriously reading the Book of Mormon when I was sixteen.  It meant a lot to me to understand how the descendants of Ephraim and Manasseh came to this continent and peopled it, knowing that they were part of the house of Israel and that they would have a very prominent role in the future of this country.

I was always very active in the Mormon church.  I was married the first time in the Salt Lake Temple.  I have always took my religion very seriously.  I was blessed to have ten children…a son, then eight daughters in a row, then another son.  They are wonderful people.  I determined when I stared having children that they would know the kind of love I had, and to have the same teachings as I”d had from the scriptures.  I loved every one of them to pieces and I believe it’s my  love and spiritual training that shaped them.

In the l960’s a new policy was enacted in the church.  It was that no matter what, we were to follow the brethren.  We were told that if we were told to do something wrong, do it, and it would be on the heads of the leaders.  This was my first red flag.  I’d never followed anyone except Jesus Christ. I’d always loved the scriptures and knew that they were true.  That just didn’t feel right to me.  So the years go by and it was during my second marriage that I started learning a lot more.  Because I had become very familiar with the scriptures, I understood what was going on behind the scenes in Washington D.C.  I learned about the New World Order

We had financial difficulties in our marriage and it was extremely stressful for me and I became very ill, which ultimately ended up in divorce,

While in my second marriage, I became aware of the New World Order.  I knew immediately that it was the conspiracy that the scriptures warned us about. I stated informing people about it and was called in to my Bishop’s office with the Stake Pres. present and they told me to deny what I’d been telling people about the New World Order.  I refused as I knew what I was talking about and so I was excommunicated from the Mormon Church.  In truth, it has been a blessing because I have learned so much more.

I’m hoping that with Reader’s Magnet I will be able to further enlighten those that are interested in learning, especaily young people.   It’s so important to know the truth.