by ReadersMagnet | May 15, 2019 | Christian and Inspirational, Featured Article | 0 comments 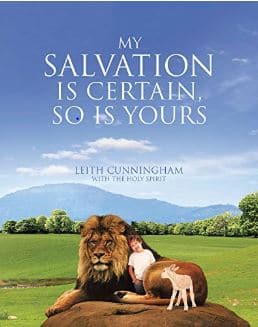 “Thank you, Authors’ Lounge, for featuring my article”. “My Salvation is Certain, so is Yours”. This book peels back the layers of the false teachings of a counterfeit Christian church all around the world, numbering in the multiple thousands. Then splinter groups that have left and fallen away from them. Most all of these many churches teach after custom, ritual and tradition as opposed to the truth of God. Never mind that God tells us His Word is truth, they most one and all refuse to believe Him. I document much of this in my book, using the Word of God as my living witness.

There are several sources we basically look to for absolute truth. There is acquired truth or understanding that may begin by a supposition that eventually becomes a hypothesis before moving into a theory and finally accepted as the truth, but is it? Then in computer science, artificial intelligence, sometimes called machine intelligence, is intelligence demonstrated by machines, in contrast to the natural intelligence displayed by humans and animals. Then there is revealed truth, that which God has been revealing to us along the way, but is it the truth?  It is the absolute and undeniable truth, but there is a key to understanding it. If God does not call and open a person’s mind to it, they cannot understand it. Matthew 11:25 New Living Translation At that time Jesus prayed this prayer: “O Father, Lord of heaven and earth, thank you for hiding these things from those who think themselves wise and clever, and for revealing them to the childlike.

For whatever reason I may never know, God has called and opened my mind to grasp and begin to understand His awesome truth. It was definitely not because of my great intelligence. I quit school with a ninth-grade education and joined the U.S. Army. While I do not have letters before my name equal to PHD, I do have a DD 214.  The DD Form 214, Certificate of Release or Discharge from Active Duty, generally referred to as a “DD 214”, is a document of the United States Department of Defense, issued upon a military service.

During 1950-51 I was a combat machine gunner as an infantryman in the 2nd Inf. Div. During the coldest Korean winter in a hundred years. Without any warm clothing in 30 to 50 below zero weather that never seemed to change. Our weapons that we were supposed to be able to depend upon in staying alive didn’t work properly much of the time. I carried and stacked more dead soldiers than I can ever count, as they were also being killed daily and many were being dug up from their temporary graves and shipped to Japan for processing to be sent home. I can still in my minds eye see fields littered with dead enemy soldiers all blown to hell and their bloody and mangled bodies emanating steam into the air, of what a few minutes ago was a living, breathing human being made in the image and likeness of God, just like we were.

God had used it all to my good, even though I came home a mental wreck and became a fall down staggering drunk from self-medicating myself for the next ten years. God reached down in the filth of this world and brought me up and out of the grunge soaked robot I had become. He is still working on striping away layers of the built-up slime of this world. I have become an ambassador for God, His Christ and for the soon coming kingdom of God. God has spent the past fifty-five years preparing me for service today and on into His kingdom. I am in the process of teaching His Word and His ways to the world in the best way that I know to do it. May God bless you and yours, and I pray my book will be a blessing to you.