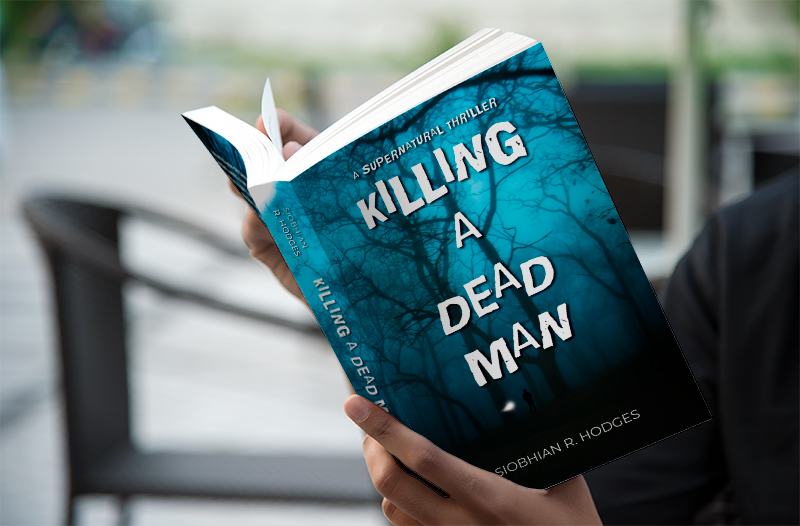 I’d like to start by thanking Author’s Lounge for allowing me to talk about my debut novel, ‘Killing a Dead Man’. And to thank you, the reader, for your support.

‘Killing a Dead Man’ is about a teenage boy, Jordan Richardson, trying to avenge his twin brother, Danny – but with a supernatural twist. When Danny is murdered on a family holiday, Jordan’s world is torn apart. Continuing life as an outsider, he decides he will stop at nothing to find whoever killed his twin. That’s when Danny returns as a spirit, bound to his grief-stricken brother to protect him on his quest. The only problem is … nobody else believes Danny is back.

With his dead brother’s guidance, Jordan travels across the country to seek revenge. Nothing will stop him. Whoever killed his brother is a dead man walking.

‘Killing a Dead Man’ is available on Amazon as paperback and eBook:

After attending ghost walks and participating in seances, it’s difficult for me not to write about all things spooky! I’ve always been interested in the supernatural, wondering whether spirits really exist and, if they do, why they would come back. Are they the ones who make the unexplainable noises in our homes? Or give us goosebumps for no reason? Where do they go when they’re not with us? Is it all in my head? Whether people believe in ghosts or not, it’s comforting to think that any loved ones who have passed are still watching over us.

I came up with the idea for ‘Killing a Dead Man’ when I was fifteen. However, I knew I had a lot to learn about writing before I could do the story justice. That’s why it took me ten years to write. I’m glad I waited, too, because while I was busy developing my writing skills, a lot of my own spooky encounters and life experiences found their way into ‘Killing a Dead Man’. Then, after graduating with a master’s degree in creative writing, I finally set about publishing my first book.

The novel was inspired by my own close relationship with my siblings. Growing up, me and my sister were inseparable – this is what I based Jordan and Danny’s relationship on. And when my younger brother came along, the three of us got up to all sorts of mischief (as kids do!). When you’re that close to someone, though, the thought of losing them is unbearable. Naturally, this strong bond I had with my siblings and the unimaginable pain that comes with losing such a friendship soon became the driving force of the narrative (coupled with my interest in the supernatural, of course).

The premise for ‘Killing a Dead Man’ was always about losing somebody you care about but still being able to communicate with them as a spirit – something not everyone believes in. I figured that, while Jordan dealt with his grief, having him talk to the ghosts no one else can see would create all kinds of complications. And I love writing about complications!

As well as directing the book trailer (which is available to watch on YouTube or my website), I am currently co-directing a music video for ‘Killing a Dead Man’. The song, “Witness”, is performed by Beth Hartshorne: a talented singer-songwriter who has captured the essence of Jordan’s guilt and relationship with Danny in her “Witness” lyrics. The music video has been put on hold due to COVID-19, but filming will continue soon. You can follow any updates on the music video through my website or on Instagram.

I have also written a short story about Jordan and Danny that will appear in my upcoming anthology, ‘Untitled Decade’ (2021). Follow me on Instagram for updates on what I am working on: siobhianr.hodgesauthor

The underlying message in ‘Killing a Dead Man’ is that, not only is it okay to be different, but it takes courage to follow your beliefs – especially in a world where not everyone shares or even respects your views. I also wanted to portray that while we all have regrets, it’s important not to let them consume us. As Jordan realises, you shouldn’t feel scared or guilty to live your life the way you want to live it. So, go out and make it your own.

To find out more about ‘Killing a Dead Man’ and yours truly, check out my website: www.siobhianrhodgesauthor.com