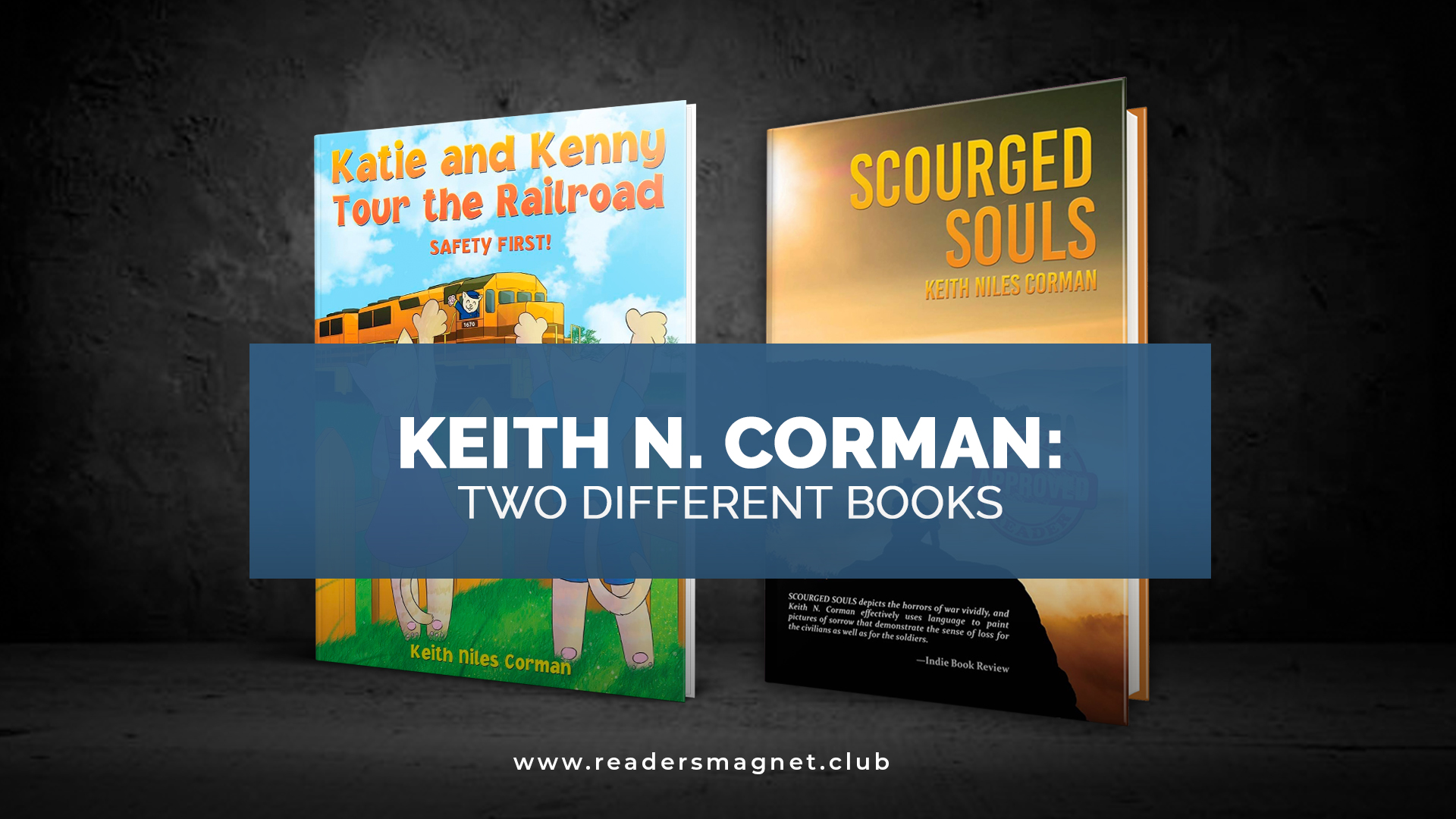 Keith N. Corman wrote two different books: a children’s book, and the other is historical fiction.

Keith N. Corman is no stranger to ReadersMagnet. We have featured his works numerous times. Last year we also had him in our Author Feature section. Aside from his published works, Corman is most known for his love of locomotives and railroads. He is also an advocate for safety measures in workplaces, especially in railroad and places of travel. Today, we are going to revisit Keith Niles Corman and his two remarkable works, one is a children’s illustrated book about trains and railroads, and the other one is a full historical fiction novel about the American Civil War.

Of Trains and Safety

Keith Niles Corman published his first major literary work in January of 2016. It is a children’s illustrated book titled Katie and Kenny Tour the Railroad. It is a 34-page book design for readers up to 12 years old. The book features the one-day adventure of siblings Katie and Kenny of Catville. One fine day, the siblings get their chance to go on a wonderful tour of a local railroad yard where their father works. Katie and Kenny’s father is a railroad engineer.

Keith N. Corman’s book is not only remarkable because of its illustrations and characters. Katie and Kenny Tour the Railroad is one proof that a children’s book can be both entertaining and educational. Here, readers will appreciate the beauty and majesty of trains and locomotives and learn about the importance of safety measures in railroads and places of public transport.

On the Horrors of War

Within the same year of his first book’s release, Keith N. Corman published his second book, Scourged Souls. The said book is Corman’s first full fiction novel. Scourged Souls is a historical war drama set during the last months of the American Civil War, which lasted from 1861 to 1865. The story features the famous battle between the Union and Confederate forces at the Battle of Kennesaw Mountain in 1864. In American history, the Battle of Kennesaw Mountain (fought on June 27, 1864) is one of the unforgettable battles and the most significant frontal assault launched by the famous General William T. Sherman.

In his debut novel, Keith N. Corman takes his readers to a small village in Georgia where three little boys are about to lose their innocence and bear witness to the horrors of war. Wil, sam, and Isaiah grew up in Georgia’s mountains and have known nothing but peace and carefree day in their little and isolated paradise. But that was before the war. The happy days of hunting squirrels and watching trains go by are slowly fading as war reaches Georgia. The village people, as well as the men fighting the impending battle against Union troops and Confederate forces, are forever changed because of war.

Scourged Souls is a departure from Keith Niles Corman’s previous work. Here, Corman displays his talent for writing historical fiction. Corman writes with high historical accuracy and vividness and captures the many emotions of those who took part and witnessed the horrors of the American Civil War. Scourged Souls is a remarkable debut novel, to say the least.

Keith Niles was born in Cincinnati, Ohio, to parents Leo and Janet Corman. Corman spent his childhood in Lawrenceburg, Indiana, and stayed there until 1975. Most of Keith Niles Corman’s career was in public service, where he spent more than three decades both as a public servant and as a political advocate. After retiring, Keith focused on other endeavors. One of the things that he is most passionate about is his love for trains and railroads. He also channeled his energy into a consulting company which he founded. The company, which is based in Cincinnati, focuses on economic development and inter-modal logistics. Keith N. Corman’s other interests include politics, history, and religion.

Keith is married to Martha Corman. They have one daughter, Amanda, who lives with her husband Caleb in Marietta, Georgia.

To know more about Keith Niles Corman, you can buy his books, or you can visit his website today.