HARVESTLAND, A Novel by Meldrick Carter 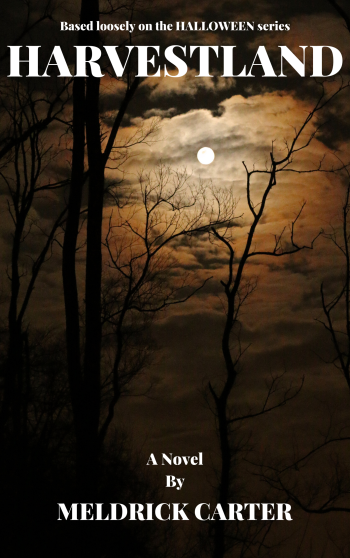 Horror.  Romance.  Noir.  This is… Harvestland, an original novel based loosely on the Halloween series.  Do not be deterred, however, if you are unfamiliar with the popular series of horror films, for knowledge of them is by no means a prerequisite.  Harvestland works as a stand-alone story, and is in truth a mixed-genre novel, a horror tale wrapped up inside of a detective yarn inside of a love story.  There are definite Halloween nuggets in there for the diehards, but because of its loose relation to the series, and for legal reasons, “Halloween” is not in the title.

The gist of Harvestland is this: Two private investigators track a serial killer to a small town in Iowa at the behest of an ailing psychiatrist, and a lonely young woman finds her life in danger when she uncovers a dark secret in the small town’s past.

The book is available on my site, the link of which will be below, and it’s completely free.

I planned to publish Harvestland traditionally at first.  I even talked to the licensing people at Trancas International Films (the force behind the Halloween franchise), since my book dabbles a bit in their intellectual property, but they weren’t interested.  Ultimately I decided that was a blessing.  I wanted complete creative control to do whatever I wanted, and I didn’t want editors or rights people messing with the manuscript, telling me to change this or not to do that.

Writing is not my day job.  A career in it would certainly be the dream, but it’s not a bad life for me at all at the current moment.  I’ve been a corrections officer going on seven years now (before that I studied criminal justice in college and grad school), and at home I live a relatively quiet life.  I try to spend as much time as I can with my wife of eight years and our five-year-old son, and if I’m not reading I’m trying to fit in a workout or explore my obscure hobby of visiting dead or dying malls.  Between work and home, I am certainly a slower writer than I used to be, but the itch has always been there.  Some of the writers who have had the biggest influence on me: Dennis Lehane, Ralph Ellison, George V. Higgins, Toni Morrison, John D. MacDonald, and Mickey Spillane.

While not getting traditionally published was disappointing at first, the huge benefit with releasing Harvestland myself was that I got to go completely balls to the wall with my vision.  There’s all the familiar Halloween violence and terror in my book but with tons of new twists: hard-boiled detectives, slow burn mystery, erotica, family drama, teenage angst, buried secrets, and that’s not even all of it.  Harvestland is both my love letter to the Halloween series and my epic romance with the craft of writing.

For the Halloween fans that are out there and may be wondering where my book fits in with the continuity of the series: Harvestland takes place between Halloween II and Halloween H20.  It follows the H20-Resurrection timeline, which ignores parts 4-6.  It also has no relation whatsoever to the newest entries in the series, 2018’s Halloween or its upcoming sequels, Halloween Kills and Halloween Ends.

And if you like my work, check out my other book, Trapped, which is also available for free on the site.  Trapped is a novelization of the 1989 made-for-TV horror film directed by Fred Walton (When A Stranger Calls).  I had the pleasure of getting an early draft of the screenplay from Fred Walton himself, and also got his blessing to go forward with the novelization, which I had a lot of fun writing.  By getting it out there I hope to revitalize interest in a relatively unknown and criminally underrated horror/thriller gem.

One day I would like to get both of my books in print, perhaps self-published or on Kindle, once the legal logistics are worked out.  In the meantime I’m just looking to get my work out there, and I’m grateful for the opportunity with the Authors’ Lounge platform on ReadersMagnet for a little shameless promotion.