Fairytale Christmas Magic: “The Girl in The Red Cape” by Suzy Davies 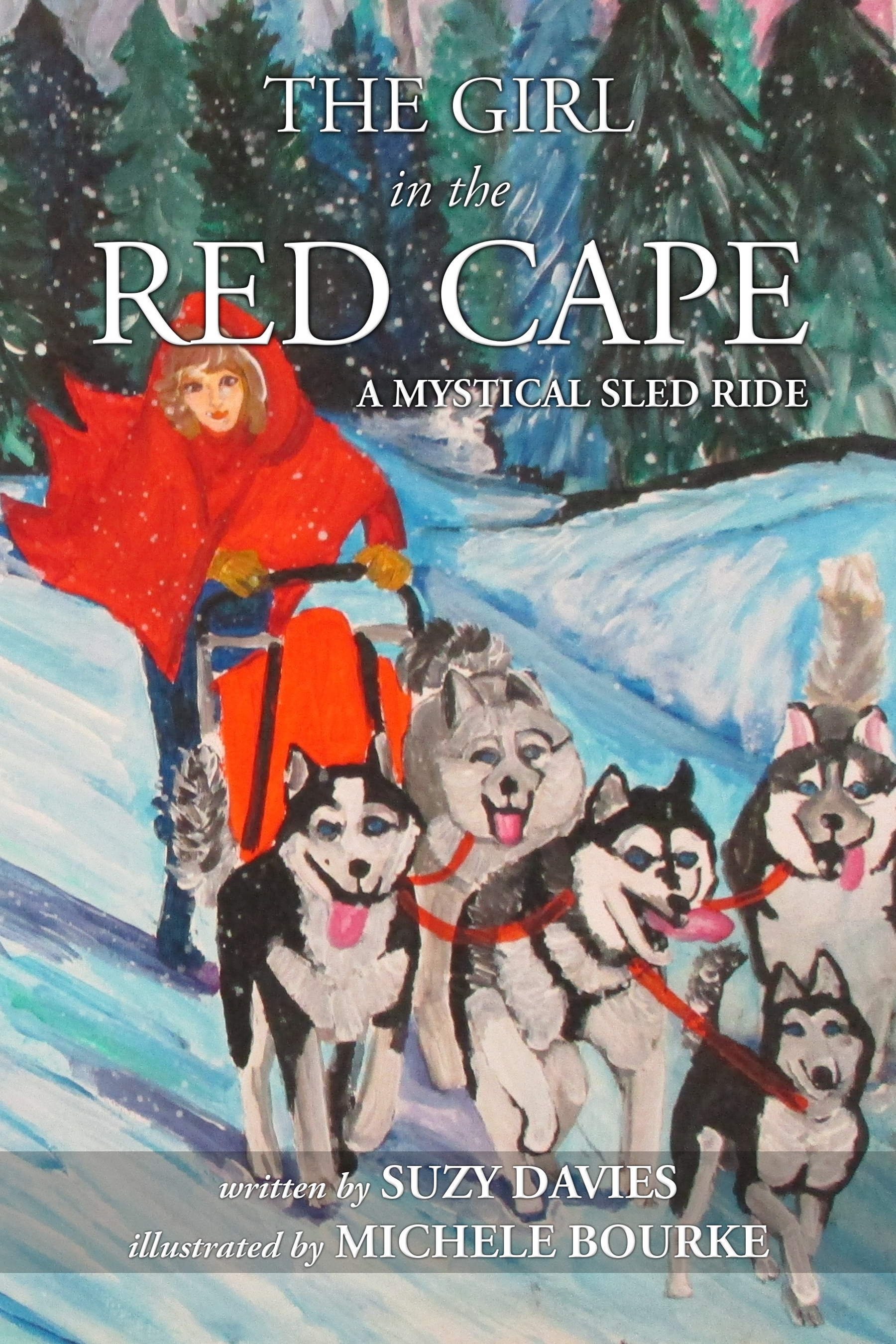 Brother and sister, Billy and Stella compete in the Junior Race with their dog-sledding teams. All kinds of dangers await them, not least the wolves. Their step-brother, Tom, a solitary Inuk, has angered the pack. Queen Wolf is missing. The wolves will make good their loss or seek their revenge.

At the heart of the story, Stella, a rookie musher, is on the threshold of womanhood. “The Girl in The Red Cape” is running with wolves, dancing across the virgin snow. All alone, it’s Stella against the wilderness. But sometimes an invisible power supports her. And she has her loving Gran, always by her side, and friends who encourage her.

My book is a heartwarming action adventure fairytale, that speaks of the power of family, friendship, loyalty and courage, qualities we all need to succeed in life and flourish.

What is your inspiration for the story?

My inspiration for this book comes from my reading and my childhood. I have always loved fairytales, and my favorites are those classic reads written by Charles Perrault and by Hans Christian Andersen. I wanted to write the kind of story that would appeal to children and young adults, 9 to 12 years old, and the young at heart. I decided an animal fairytale would be best. I also wanted a tale with a magical theme and one that had all the enchantment and wonder of a snowy Winter Wonderland.

My idea was to create a modern retelling of Charles Perrault’s, “Little Red Riding Hood,” complete with an endearing shape-shifting Grannie-Can-Do, and a lone wolf at the centre of the tale. Children are far more sophisticated than they were at the time the original tale was written. So, I made the mystery of the wolf more intriguing, and gave more dimension to the central character, “Little Red Riding Hood.” I decided to make this Stella a young, shy teen, about to come of age, gain in confidence, and reach for her dreams. I gave her a loving, supportive family with a helpful brother, Billy, who was close. Their relationship was inspired by siblings I know who stand by each other through thick and thin. Stella and Billy have an almost telepathic empathy between them, and the relationship is real with all the teasing and rivalry that accompanies a deep intimacy and love.

I wrote in a love interest sub-plot , which brings out the protective qualities a good brother has for his sister. This romantic aspect of my book is clean, and suitable for young people, 9 to 12, to read.

My lead characters, Stella and Billy, are three-dimensional and they do have to overcome uncertainties, obstacles and challenges in order to self-actualise. But the whole feel of this action adventure fairytale is energised and positive, with a fast pace, so they are not weighed down by their difficulties, they rise to meet the opportunities in them! I think I drew on my own life, and the challenges I faced as a young woman as inspiration here.

I wished to make a character of the setting for my story; I have always thought that people are part of their environment and that where they live influences, though does not determine, their characters. A challenging wilderness – Alaska – seemed the perfect place to bring out Stella and Billy’s characters, and to make them each, in their own way, heroes in the story. The Wales of my early childhood days influenced my writing – just like Alaska it was wild and untamed, and a fairytale setting, full of enchantment and wonder.

I agree with the great E.B.White who famously said:

“Always be on the lookout for wonder”

For me, snow always takes me back to my imaginings as a child, and to the wonder in nature. It’s with that kind of imagination that I write.

From an early age, I was an outdoorsy kind of girl. I even went horse-riding in the snow. Dog racing is a similar sport. It was easy for me to imagine the up and down motion of the sleds racing through the snow-covered terrain. When you are riding or mushing you can go to places that people can only dream of, and your view of the world is different, depending on whether you are moving at a trot or a gallop, slow or fast, going through woods or climbing up to high terrain.

Back at the converted Welsh mansion, where I grew up in an extended family, we lived with my Gran in the top floor flat, we always had snow in winter. The flat was high, high up, with huge windows, and I had a bird’s eye view of the snow for miles around. I remember being fascinated by snow-filled skies, the gleaming quality of frost on the trees and bushes in the garden, and the powder of a light dusting on the rooftops of the terraces all around. On car rides, the mountains were awe-inspiring with snow on the peaks, the fields were seas of snow, and the waterfalls, magical crystal ice-tunnels. One year, we visited my cousins in Slough. Snow had formed a high wall over the cars so we were snowed in. It was not difficult for me to imagine Alaska in the snow, and all the kinds of snow the mushers encountered.

Later in life, when I was studying Social Psychology at university, I discovered that The Inuit have an impressive variety of words for different kinds of snow because their survival depends on it. In my tale, the Mushers’ journey involves negotiating unpredicable weather and conditions; a metaphor for the journeys of our lives, where we adapt in order to thrive.

Hans Christian Andersen’s wonderful fairytale descriptions of snow in “The Snow Queen” inspired me to make the scenes, sometimes with powder-like “dust from the cosmos,” and sometimes with high walls of snow, or vast ocean-lakes of snow, sound beautiful. I have always loved travel, and I wrote the story not only with the reader’s eyes at ground level, but also introduced aerial views of the landscape to give the journey dream-like interludes and a panoramic effect. I have always loved traveling by plane, including light aircraft, and this experience came in useful in helping me make the story.

Michele Bourke encouraged me to weave in something about the Alaskan Triangle. So here is the paradox; Alaska is the kind of place where you may find yourself even if folks think you are lost. This reminds me of the famous line from Tolkien:

“Not all those who wander are lost.”

The Northern Star in my story is a motif that stands in for one’s inner voice, that quiet subtle voice that says someone is headed in the right direction. Looking at the night sky has always been an inspiration to me. It’s that feeling of wonder again. There’s a shooting star in the story. For me this is a symbol of hope and dreams to be fulfilled. I have gazed at the firmament and made wishes. Doesn’t everyone? I’m inspired by the idea of a Greater Power in the grand scheme of things.

The character of Alaska in the story reveals the interplay of light and dark, sunshine and shadows. And there are mystical elements which draw on traditional folk tales.

My inspiration for my dog characters came from the movie, “Dances with Wolves,” and I “heard” the music score in my head as I was writing. In particular, I wanted to show the bonds between animals and humans and their interdependence.

The harmony between dogs and humans contrasts with the conflict between humans and the wolves; this helps to build tension and excitement in the story.

Black-Claw The Raven is my favorite animal character who is the most magical. He comes from the old mansion where I lived as a child; we always had ravens and there is something endearing about them. But I am also pleased with little Tag, The Fox, who brings the magic of The Northern Lights to the race. My idea for him came from an old Nordic folk tale.

When I write, my stories are always character-led, and I fill in the details from there.

I read around everything I could about the race itself – The Junior Iditarod – then I took courage in both hands, and decided to approach a celebrated Alaskan sportswoman who could advise me on some factual details.

Anna Stephan, Champion Musher and Winner of The Junior Iditarod 2019, was so generous in her support of me, and she agreed to be the consultant for the factual elements of my story. She informed me of the importance of the partnership between Mushers and their dogs:

It was such a thrill to collaborate with Anna, and a humbling experience when you see what she has achieved.

What do you hope readers will take away from reading your story?

My professional background in teaching and life-coaching is useful when I am writing stories, and I hope that the values in this book are uplifting, encouraging and inspirational to young minds.

I hope that readers will get a “can-do” approach to life challenges and opportunities as they read the book, at the same time as being entertained by the fairytale. For Alaskans who read the book, I hope they will see something of the magical world they know within the pages. And to those from farther afield, I hope they will be captured in its spell. I know that the story will appeal to lovers of nature and of animals. And I think that those who like animated movies especially Disney, will love the tale. My story will be of interest to homeschoolers who want an appealing story to key in to their Geography, Culture, Nature, Science, Sport, Art or Lifecoaching lessons.

I would like “The Girl in The Red Cape: A Mystical Sled Ride” to be in the hands of readers all over the world. What will happen in the future? Who can tell?

Suzy Davies is a Children’s Author and Writer of Fairytales. She became fascinated with language at an early age, and started to write at the age of six. Writing has been a constant all her life, and “The Girl in The Red Cape: A Mystical Sled Ride,” is her seventh book. She is a little bit superstitious about this, since seven is her lucky number!

Suzy lives and works in Florida with her husband who is a writer, and two semi-wild cats.

Suzy would like to thank Elizabeth at Authors’ Lounge (The Readers’ Magnet Club) for inviting her as a guest author. Her book is available for sale on Amazon Worldwide in Kindle ebook, Kindle Unlimited and in Paperback. You can check out more about her on Goodreads.