Legends of Deceit by Rebekkah Ford 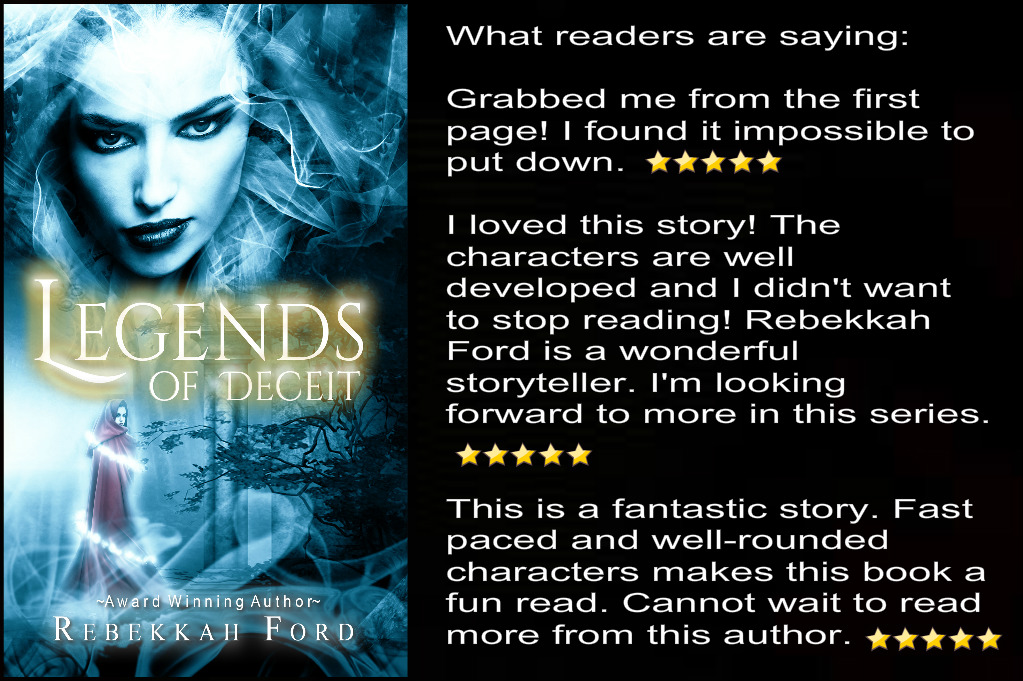 Hi to all of you wonderful readers out there, thanks for stopping by. Before I dive in, I’d like to thank the Authors Lounge and Elizabeth Schultz for inviting me to share my story with you. I appreciate it so much.

My name is Rebekkah Ford. I’m an award-winning author that writes YA and new adult paranormal romance and fantasy books. The novel I’m going to tell you about today is Legends of Deceit. It’s a new adult fantasy book with a paranormal twist that will delight readers.

How do I know this?

I know it because the people who have read Legends of Deceit told me so. 😊

Legends of Deceit is about a reluctant heroine who is heir to the throne in a magical world where mythical creatures both beautiful and frightening exist. She’s forced to embark on a journey of love, duty, and honor. Yet the pathway is paved with deceit, and it becomes a journey of life and death. 😬

Twenty-two-year-old Haven Evergreen is our heroine. One day she’s thinking about her next semester in college as she and her BFF drive home from a fun-filled time in Vegas, and the next she encounters two tall creepy beings in her kitchen, wearing hooded cloaks. They seem to have appeared out of thin air and are transparent. One of them wants to taste her blood, but they have specific orders not to harm her, only capture her. But then a guy with piercing green eyes, wearing upper body armor that looks steampunk, appears and saves the day. He transports Haven to a realm called Atheon. She quickly discovers she’s not who she thought she was, and ten years of her life has been a lie. Her father is the king of Atheon, and her step-mother is a gorgeous fairy. Meanwhile, darkness lurks in the shadows of the palace, poised to leap forth when its master commands it to do so. There’s something special about Haven that a nefarious being desires and needs in order to possess the most powerful magic in that realm. Haven doesn’t want any part of this world and has a hard time wrapping her head around who she really is and that fairytale creatures do exist. She longs to go back to earth, but then becomes friends with a dragon, and her perspective changes.

What inspired me to write this book was I wanted to stretch my writing skills and imagination. I thought writing a story that had mythical creatures in it and a kingdom in a different realm, would do that. And me, being me, had to add a paranormal twist to this magical fantasy tale. I added werewolves and vampire-like creatures in the mix, which is so fun. 😁

You can get Legends of Deceit here:

My target audience for this book and my other books are YA adult and up.

What I hope readers get out of Legends of Deceit is that change can be a good thing. At first, it’s hard, especially like in Haven’s case when tragedy is what sparks it. If you resist the change, though, you’ll be miserable because change is part of life. You need to be like water and flow with it. Where there is change, there is growth. 😉

Legends of Deceit is a 2-book series. I already have the second book written. It just needs to go to my editor and through the whole publishing process. I don’t know when that’s going to happen to be honest. I’m being like water and going with the flow. But I will let my readers know when I have a release date for it.

I also have written an awesome YA paranormal romance trilogy called Beyond the Eyes. It won an award and was once selected as one of the best YA paranormal romance Kindle books by readers, which is cool. The first book is Beyond the Eyes, the second is Dark Spirits, and the third is The Devil’s Third. I also have two companion books off the trilogy, Tangled Roots and Ameerah. Ameerah is a standalone book. She’s a fabulous character, and her story is amazing. 🥰

I’m currently writing a new and exciting paranormal series that is so fun to read and get lost in. I hope to be done with the rough draft before Spring.

If you want to get updates on my books, such as new releases, excerpts, giveaways, top-secret information, and much more, sign up for my newsletter. And don’t worry, I’m not a twat. I don’t share, sell, or spam my subscribers. Promise. rebekkahford.us7.list-manage.com/subscribe?u=06bbb5773fe9e17e6ba0e860e&id=51f0af6e94

I do have a blog that I started back in 2011. It’s on Blogger and called Wandering Thoughts of a Writer. Honestly, I was going to delete it last year, but I kept it for sentimental reasons. I don’t write posts as much as I should, though. When I do, I share about my books and life here on the Southern Coast of Oregon and the adventures I go on.

I did have an author website, but there was other content on the site that shifted away from the focus of my books, so I took down the site. I plan on creating just an author website that’ll totally rock. It’s one of my goals for this year.

When I’m not writing, I like to go on adventures and explore new places. I live life minimally and intentionally.

I believe we weren’t born to just pay bills and die. ✌️