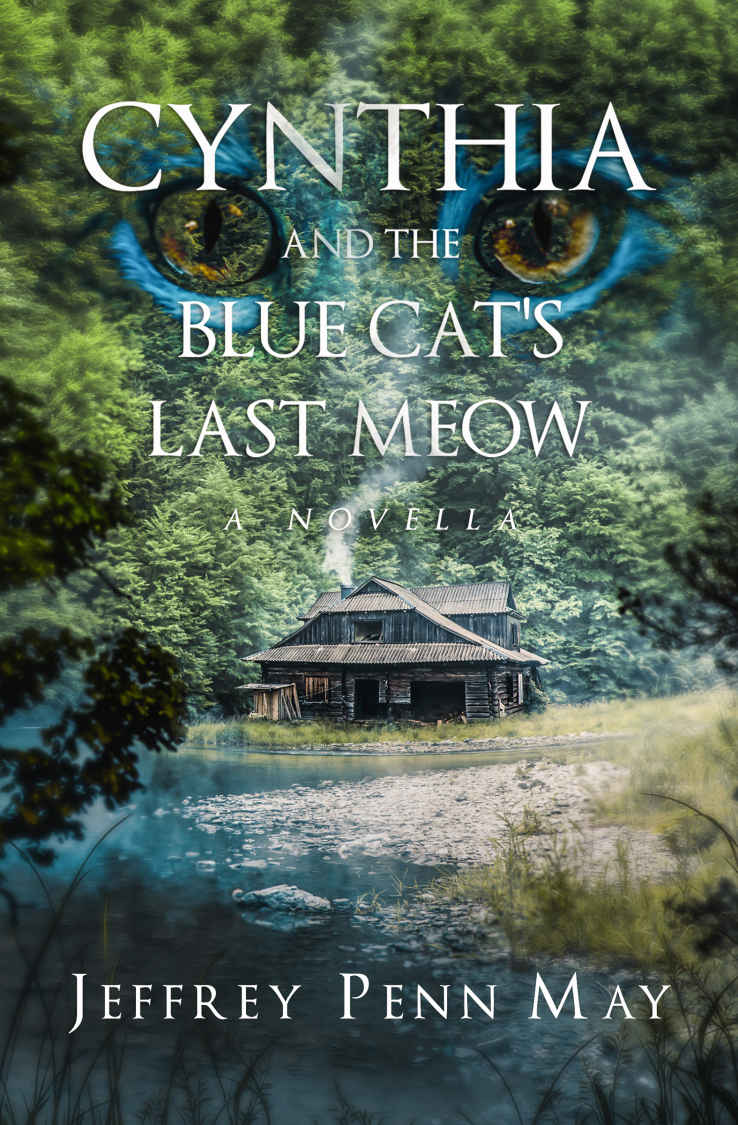 Note: Cynthia and the Blue Cat’s Last Meow by Jeffrey Penn May is not a children’s book.

Cynthia and the Blue Cat’s Last Meow was written in two days at the end of 1976 when I had just turned 23, and the original story remains as is, minimal rewrite ending around 1978. For many years I would revisit Cynthia as a reader, especially when I was buried in work and wanted to swim and fish in clear Ozark streams. The story has always been close to my heart, and a little odd, a peculiar child that I’ve never stopped believing in and loving, always my favorite but often left alone like an orphan, left behind probably because of her size, about 18,800 words. (Some may note the Richard Brautigan influence.) There has been confusion over the title, a few thinking it’s a story for children. But Cynthia is for adults, or at least readers in their twenties and maybe those who still want to be twenty, or those who have trouble remembering. I have considered changing the title, but the last meow is important.

Visitors to Authors’ Lounge might be interested to know that, while my first story was written at age 10, Cynthia and the Blue Cat’s Last Meow is one of the first after learning Transcendental Meditation. A few readers have noted the possible influence. The narrator enters a colorful, anthropomorphic land that appears perfect, and Cynthia is the embodiment of that land.  Gradually, he sees his tormented soul hidden beneath the natural beauty. This story is about the unleashing and dissolution of his fears and his maturing perception of Cynthia. It is also about her guidance and the resulting changes that occur within her.  The offbeat natural setting is established within the first few pages and progresses into a rich ménage of unusual happenings and vivid colors, fishing and fury, moonlight and candlelight, magical red berries and howling caverns, a land where many of us would like to visit, and a few do, briefly in our youth.

We should all explore such places of the soul where we dream of blue cats and hearts capable of such adventurous and idyllic sensuality. Cynthia serves as the catalyst for the young narrator’s growth, helping him overcome his fears. Some women readers may not identify with what could be construed as traditional symbolism; however, fear is genderless, and the daemons gnawing at the young man’s heart, if not logical, should be recognizable to most.

A long time ago this odd little story revealed me to a woman who became my wife of 35 years. But as the preface says: “This is merely what happened. I only hope that whoever may read it will find a place where it will make good fish bait.”

In the years since Cynthia, I’ve won several short fiction awards, published mountain climbing and education articles, technical writing guides, short stories and poems; wrote and performed a short story for Washington University Radio and was a consultant to a St. Louis theatre company. My novel Where the River Splits received an excellent review in the St. Louis Post-Dispatch and my story “The Wells Creek Route,” a Pushcart Prize nomination. After earning a BA in English and Psychology, a Masters in Secondary English Education, and Writer’s Certificate from the University of Missouri-St. Louis, I worked as a waiter, hotel security officer, credit manager, deck hand, technical data engineer, and creative writing teacher. I was the principal of a small alternative school and organized a fund-raising, climbing expedition, and have appeared in several television and radio spotlights. Born at Fort Ord near Monterey, California, and raised in St. Louis, I’ve always been compelled to explore the outdoors, leading to many questionable “vacations.” My adventures include, but are not limited to the following: floated a home-built wood and barrel raft from St. Louis to Memphis, navigated a John boat to New Orleans, dug for Pre-Columbian artifacts in central Mexico, and climbed mountains from Alaska to South America. Google my name, Jeffrey Penn May, or visit my website www.askwritefish.com. My twitter account is @askwritefish.