Cupid F*cks Up by Paula Houseman 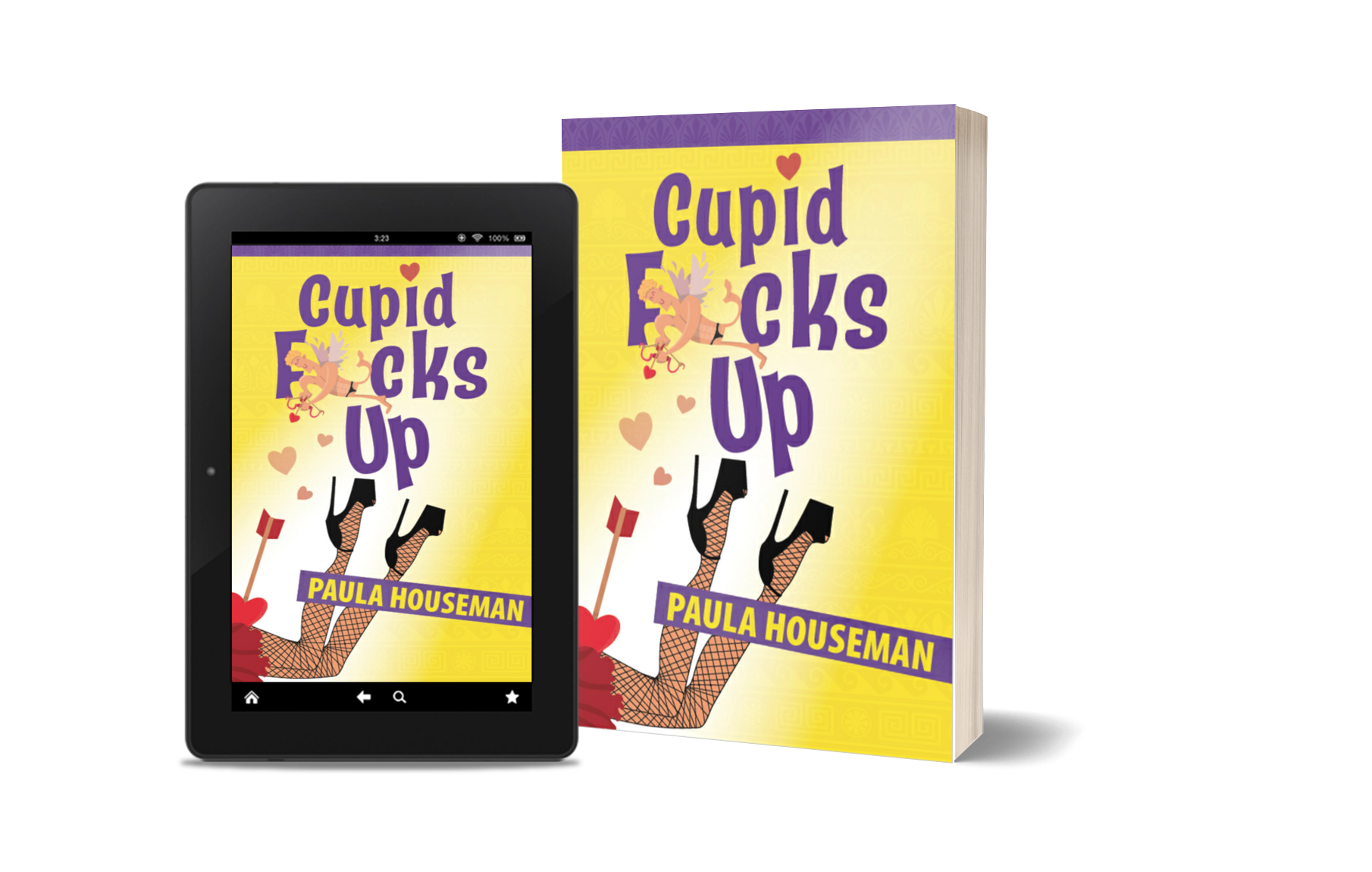 ‘Cupid F*cks Up’ is a romantic comedy with a satirical edge. It’s the second book in the Ruth Roth series because I formed an attachment to the characters in Book 1 (‘Odyssey in a Teacup’), and had trouble letting them go. They’re a clingy lot too, so there are two more in the series (Book 3: ‘My Troyboy is a Twat’, and Book 4, which is in the final stages of editing). Each book is a standalone.

Ruth Roth is a straight shooter. Cupid? Not so much.

Smart-mouth Ruth is an inspirational humour columnist for a popular women’s magazine. Recently divorced from Mr Ticks-all-the-right-boxes, she’s found the love of her life. Ruth has decided she herself is her one and only.

And she’s in a comfy place. Why wouldn’t she be? No need to yell, ‘Put the bloody toilet seat down!’ No need to hear, ‘Pull my finger.’ No need to hoover toe-nail clippings off the carpet.

But then a silver-tongued Prince Charming fronts up in his shiny Merc and tickles her discarded, little-girl fantasies. He tells her she’s The One. ‘Our love is written in the stars,’ says he.

It must be a misprint. A romance with this particular PC is not PC. Still …

Ruth’s life plays out more like ancient myth than fairy tale, and what hot-blooded woman can resist forbidden fruit?

Enter her cold-blooded mama squawking about the immorality of such a liaison, and Ruth recovers the impetus to live life in the fast lane again. She takes up with the hottie and takes on the harpy.

When tension mounts, though, even her man can’t protect her from the voices in her head. He’s hard-pressed to muzzle his own as spectacular twists in the not-so-fairy tale unearth more skeletons than in the local cemetery. It leaves Ruth feeling as if she’s dating her mother.

Yet, through a journey of self-discovery, she learns that while it appears Cupid can’t shoot for sh*t, he knows exactly what he’s doing.

All the same, who’s running this show?

Taking the advice she doles out to her readers is not that easy, and Ruth wonders if this love can survive, if it’s worth the trouble … or if she deserves it.

My first book is a coming-of-age story. But coming-of-age is a lifetime process; it doesn’t stop when you hit adulthood. And I wanted to further explore and develop the characters and their relationships. My own experiences informed my writing, which then informed my experiences. And so it goes.

My genre is upmarket women’s humour fiction—a cross between commercial and literary fiction. So, it’s plot-driven, but at the same time, it unobtrusively explores universal themes of love and relationships: self-love; romantic love; mother–daughter love. Originally targeted at the mature woman, it’s also found a readership in a younger, introspective demographic.

Our day-to-day is a challenge and we all need regular light relief, even more so in the Age of Covid. But these times have invited us to pare down and question our reality. With some in-depth psychology couched in humour, I believe my writing encourages and supports that. And I know I’ve gone some way to achieving it when I read review comments like:

—‘There’s lots of laughter, but there’s also a lot of deeper stuff going on. Very funny AND interesting.’

—‘A book that doesn’t take itself too seriously and yet addresses some pretty heavy issues, a balancing act that is very well handled within these pages.’

— ‘If you like a love story with humour and controversy this book may be the book for you.’

— ‘There were moments where I felt like I was cutting onions to moments of insight where I could hear the choir sing “Hallelujah”.’

— ‘This was the most hilariously entertaining book I’ve read in years!! I laughed and cried through the whole thing.’

— ‘Ruth takes us on one crazy ride full of self-discovery as she navigates through this crazy little thing called life.’

— ‘A book full of heartache and humour.’

I’ve had several readers say that the series should be adapted to the small screen. It’s my dream. So … Hello, Netflix (or Stan or Amazon Prime Video …)

I grew up in what now seems like an episode of South Park on an endless loop. It was in the days before Australia became a multicultural society, and before political correctness started trending. My immigrant parents struggled to live the Australian way—my father thought he was because he could fart the national anthem. Dad, the patriot. He wasn’t silenced, but it was an era when women were.

At first, I spoke through imagery, creating identities for others as a graphic designer. But when the temptation to include ‘the finger’ as part of a logo for an upwardly mobile women’s company proved too much, I knew it was time to give away design. Instead, I went to university, earned a degree and found my voice. Today, I get to express it in my books and blog.

With thanks to Elizabeth Schultz and Authors’ Lounge for inviting me to submit; for helping to level the playing field and make it possible for both men and women to be seen and heard.

You can find me here, speaking to and defusing life’s absurdities. And although I might seem virtual, realness is my jam: