Creators of the Galaxy by Rebecca Jose 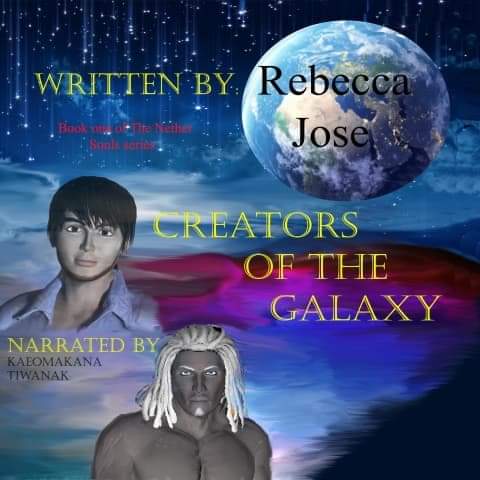 THE CREATION OF CREATORS OF THE GALAXY

My name is Rebecca Jose.  I was born as Rebecca Morton in the small town of Whitesburg in the mountains of eastern Kentucky.  I am the oldest of three children (I have two younger brothers) born to Elizabeth Morton and the late Roger Morton.  Both my mother and father were born into large families; therefore, I have a multitude of aunts, uncles, and cousins throughout the United States.  The fondest memories of my childhood are the holidays when the whole family would get together at my maternal grandmother’s house.  I was especially excited to see my Aunt Patricia Pease who lived in Georgia, and my cousin William Pease (her son).  William and I were very close when we were young, and when he came in for visits we were inseparable!  When we were apart we would write letters to each other, and this is what first inspired me to become a storyteller.

One of my favorite letters to write and receive from William was the story-telling letters.  We invented a game with our letter writing.  One of us would start a story, which the other would read, and then add to the story.  We would keep this game going until we came to the end of the story, and then would start another.  This lead to my love of writing and storytelling, and I began to secretly write stories on my own.  My favorite genre to write was fantasy and science fiction, which is what William and I would write in our storytelling games.  When I became a little older, I began reading romance novels, and I even wrote a few short romance stories.  My love for fantasy, however, far outweighed my love for romance.

When I was half-way through high school I began to work on a fantasy novel.  I created the characters, outlined the plot, and began writing.  I fell in love with all of my characters while writing the book.  I worked tirelessly for a long time, writing and rewriting, editing, and proofreading whenever I had free time.  I actually hand wrote a lot of the book, and was working on typing up my first rough draft on my electric typewriter when life happened.  I graduated high school and began working in a restaurant to save up for college.  I wanted to major in literature and creative writing, but this did not happen.

Instead, I ended up meeting someone, having children, and raising a family.  I ended up making a career in the food service industry, and I worked this career for years.  When my three children were older and we were moving into a bigger home to accommodate our large family, I was going through old boxes that had been stored in my closet and came across my half-finished book.  It was so odd to read a book I had written in high-school, and inspiration hit again.

I began to work on the book once more, transferring the written words onto my new computer.  I worked on the book while working, raising my children, and taking college courses online for medical billing and coding.  I did not have much free time and, once again, the book was put on the back burner.  I finished my college courses and began focusing on getting a job in the medical field.  I worked in an office setting for a short time, but eventually ended up going back to food service when I realized that office work was not for me.  I continued working and raising my children.

Years went by and once again, I moved into another home.  My children were all grown, and I had grandchildren as well.  I came across the book once more while I was unpacking my office.  I searched my hard drive and found my rough drafts, and once again, I began working on it.  With the help of my daughter, I proofread it repeatedly, changed it a couple of times, and finally completed the final draft.  I came across an article on google from KDP, which is a self-publishing site for Amazon.  I have always been a do-it-myself kind of person, so I thought, why not?  I self-published my book on Amazon in October, and have been working on promoting my book since.  When I got an offer from Elizabeth Schultz on Twitter to write an article about my book and myself for the Authors’ Lounge on the Readersmagnet blog I jumped at the chance.  I am very thankful for this opportunity, and I hope everyone that reads my book will be swept away into the world of the Nether where they can escape the daily pressures of everyday life.

Creators of the Galaxy is an epic fantasy adventure about the land of Nether, and book one of a series called The Nether Souls series.  Gatu is a new soul that was created in the land of the Nether.  He develops powers and abilities that he had not been given, and no one knows why.  In an epic adventure to unlock the secrets of Gatu’s power, he encounters danger, mystery, and love.  Creators of the Galaxy is a great read for fantasy and science fiction lovers alike with its many plot twists and surprise ending.  It is available in ebook and paperback form on Amazon and Kindle, and is coming to Audible in audiobook form in January 2021.  The ebook and paperback are also available in Spanish.

The link to my book and Author’s page are provided here: