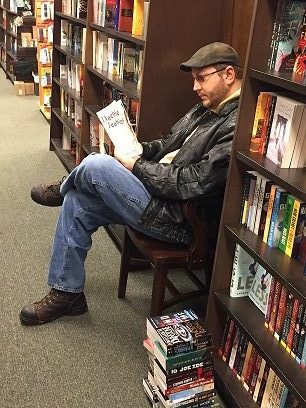 Author of the Week

Looking for a good read?  Something to take your mind off of the troubles we face today?  Sick of the divisive politics we find ourselves surrounded in nowadays?  Enjoy a book with mystery, intrigue, drama, thrills, and chills?  Maybe you’re looking for the next story to make your skin crawl?  Look no further than Heebie Jeebies by Brent J. Heyen.  “This book has everything a great suspense story should.  The what is going on?  The who did what?  The who is next?”  This critically acclaimed book has all this and more.  Heebie Jeebies is a clearly written and visually aesthetic book that takes a scenario from the deep recesses of our human nightmares and makes it a reality in a way that is like watching a movie in your mind.

Heebie Jeebies takes place in a small town in the rural US where an ecological disaster mysteriously takes form.  It begins with two friends, Joe and Frank, talking over an upcoming date with the Litzner twins.  Little do they realize that as they sit talking about the specifics of their romantic night to be, it is they who will be invited to dinner.  It isn’t long before screams resonate throughout the quiet neighborhood.  What is left of Frank is found in Joe’s room.  To make things worse, despite the unlikeliness of it, Sheriff John Biggs suspects Joe of not only killing his long-time best friend, but of doing nothing less than stripping him to the bone.  It isn’t long, however, before the empirical evidence vindicates Joe, and points its bloody finger at the least likely of suspects; common insects.

This insect, it turns out, is not so common as they think, however, as it has been mutated in many ways; including that it now feeds on human flesh.  Once the remains of smashed insect bodies are found under a second partially stripped corpse, Dr. Simon Holloway, an entomologist from a nearby university, is brought in to consult on what might actually be the cause of these strange attacks.  Eventually, Sheriff John Biggs must call in all his assets as more and more people, including those closest to him, are taken by this plague of bites.  This includes Elliot Radcliffe, a local exterminator who the good Sheriff has hated for years because of his suspicious relationship with the Sheriff’s wife.  As more attacks happen, however, the Sheriff must put his feelings aside in order to stop this disaster from eating his whole town; or worse, spreading to others.

To make matters worse, the local mayor, who seems more interested in getting reelected than in stopping the spread of this disaster, keeps riding the Sheriff’s back.  Nerves are frayed, and as the body count continues to climb Sheriff Biggs must resort to drastic measures to stem the tide.  Meanwhile, the insects seem to have their eyes on a juicier target, the local school.  Furthermore, thanks to the work of Reporter Cindy Chavez, everyone becomes aware of the severity of what is happening, and what starts out as people simply noticing peculiar behavior of the local police and fire forces, turns in to a reason to panic.  It takes the quick thinking of Sheriff Biggs and Dr. Holloway to keep things from blowing up in their face like a powder keg.

Critics acclaim, “It kept me wanting to read from chapter to chapter.”  That is, of course provided you can handle having a serious case of the “Heebie Jeebies”, as one critic said, “It made my skin crawl so much that I had to put the book down.”  Heebie Jeebies will take you on twists and turns.  “Loved the ending!  Never saw it coming!”

Will Sheriff Biggs be able to discover what is happening and stop it before more people get invited to dinner?  Will he be able to get past the pain and loss of those close to him in order to prevent the loss of others?  Does Joe still have a chance with the Litzner twins?  Will you join us for lunch?

Heebie Jeebies can be found in soft back and ebook formats at www.heebiejeebiesheyen.com, barnesandnoble.com, amazon.com, and online and local bookstores.  You can also find it on Facebook @heebiejeebiesheyen.